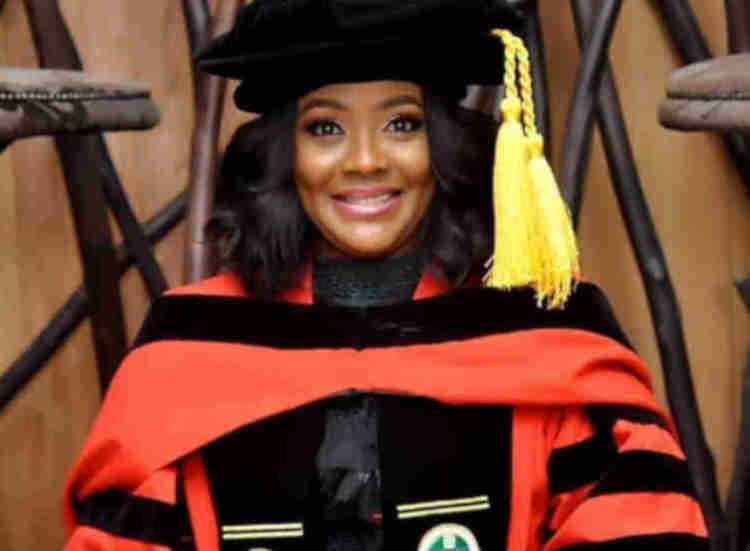 Popular Comedienne, Helen Paul made history last week when she graduated with a Phd degree in Theatre Arts at UNILAG. She was one of those who graduated, alongside her husband, Femi Bamisile who also bagged an MBA degree. Both Femi & Helen have many degrees in their kitty. Femi has ICSA, a Masters in Law, an MBA and MPA. Helen as a B.A in Theatre Arts from UNILAG, M.A in Theatre Arts also from UNILAG. She has a MBA from Lautech and an MPA from the same institution.

The following day after her graduation Helen Paul shocked the whole world when she announced that she is a product of rape. Helen Paul revealed that she was given birth to out of rape and was tagged a bastard while growing up. Helen said she dedicated her Phd in Theatre Arts to her mother for standing by her all the way. She made the revelation in an emotional post on her Instagram page, as she heaped praises on her mother for being steadfast and positive, despite the circumstances that surrounded  her birth.

She wrote: “I Helen Paul dedicate this to my mum. You gave birth to me out of rape. They told you I wouldn’t amount to anything. I grew up hearing from family members being called a Bastard and each time I asked you, you said (Olorun lon wo omo were. Olorun ma wo e) meaning God watches the child of a mad person. He would watch over you. Mummy I want you to know I love you. I might not buy you a Benz now because I don’t have the money yet but this certificate will amount to something great.”

They say FAME is nothing, but GRACE is everything and I pray for grace in everything I do. I am not a Cele member, but late Osofa gave me the name and everything late Osofa said about Helen Paul is coming to pass. I dedicate this award to every mother. May God make you strong enough to survive and enjoy the fruit of your labour.

Below is her interview with City People Magazine Publisher, SEYE KEHINDE.

How do you feel bagging a doctorate degree from a highly reputable University like UNILAG?

I am elated. University of Lagos is a reputable institution. It has produced distinguished individuals who are at the top of their various endeavors. Renowned academicians, distinguished politicians, media practitioners, doctors, lawyers, accountants, engineers, captains of industries, name it. The tutelage we are made to pass through is thorough and robust. You can’t come to University of Lagos and do a shoddy job when it comes to your academic sojourn. So, I felt so humbled when, after having gone through a rigorous but worthwhile training. I was summoned by the school to be amongst so many distinguished individuals, some of whom are alumni of the University, and called out to receive a PhD. It was a remarkable day for me!

What made you go for a doctorate degree?

I have always loved academics. I have a thirst for knowledge. I believe that education opens doors. And it opens minds. So, I challenged myself to reach the very peak of my academic sojourn. A PhD is a challenge and a half. It’s not an easy feat. But I love challenges. I like to set targets and go for them. However, I have observed that my life is strictly hinged on grace. All I need to do is set a target and tell God what I want to achieve. Then I leave the rest to God. Things then become easier than they ordinarily would have been. The PhD was accomplished to exhort myself and to also encourage and inspire others as I was told I would end up like my mother in terms of academics.  She is doing well in her business

Who is the real Helen Paul?

When talking about temperaments, Helen is a mix of the sanguine and the choleric. The outgoing, energetic, loud, outspoken character but also a goal setter and who likes to move with the speed of light to achieve things. I might mean many things to many people, including being the life of the party, or the brute who hates to see people sleeping on their dreams. If the need arises, I will bully you into achieving your individual or our collective goals at work (laughs). I have several mood swings within a short period of time (laughs). This is because my mind is always ruminating on and exploring ideas. So, a simple Helen is compassionate and loves to put laughter on everyone’s lips. But Helen is also a busy mind, working, plotting, even scheming to take things to the next level. Perhaps I have a more dominant choleric temperament than any other due to my ever busy mind, lol. Uncle Seye, know me

Helen Paul amazes me. You are many things rolled into one. You are a comedienne you are a successful trader. And you are an intellectual. How do you juggle all these roles in one person?

Again, it’s grace. I have no formula. But I read a lot of diverse topics with a view to improving myself. I always approach whatever I set out to do by putting my best foot forward. Success starts with self-discovery. Many people discover themselves early in life. Some don’t until much later. But all will be well because what matters most is how well and not how fast one is able to utilize ones talents. I am a people manager. I am also a process manager. These are internal skills that I discovered long time ago. When you combine both gifts, the results are amazing. This is because we all need a support system. You may be extremely talented but you can’t do everything by yourself. So, I do what I am best at and work with a team of people who also have their respective areas of strength and expertise. I am surrounded by young and budding talents. And I mean both at the home front and in the workplace. So, I thank God for my support system. People that understand me.

A few days ago you were quoted as saying you are a product of rape. Is this true? What happened?

Yes. I believe that this story came out at the God-ordained time. I had a conviction that the time was ripe to speak out about it. Only God knows whose life was being touched or who was getting inspired by this story. You know, I’ve discovered that all humans have a story. And I’m not talking about everyday stories. I’m referring to unique and outstanding stories that we don’t get to hear everyday. We shy away from telling those stories due to the fear of the unknown. We fear the possible backlash; what people might say; how people’s perception of us will change, etc. But those encounters are not mistakes. They’re for a purpose. You never will know the amount of lives and souls that you may be saving due to such inspiring and motivating stories.

So, it happened that my mom conceived me for a man against her will. Let’s put it that way. And he absconded. So I grew up being called a bastard and someone that would amount to nothing. Growing up was tough. There were times mom and I felt like giving up. I also used to fall ill several times and mom continued to take me from one hospital to another. In the process, she also met many great individuals who foresaw the star in me. These people encouraged her to hang in there. That she has brought a great seed to life and it would be revealed in the course of time. So, I’m confident to tell everyone that cares to listen that there’s a glory in every story, a triumph in every trial. Some things happen to us for a reason. Jesus’ birth was strange. And so also many other men called by God for separate reasons…

Helen Paul is also a dutiful wife and mother. How many kids? Tell us this side of you.

Yes, Helen is a dutiful wife of a wonderful husband. She is also the mother of several nations (laughs). I love children. So I make it a point of duty to surround myself with them. So, sometimes I like to throw quizzes at people. They wonder “we knew when she had two boys, so when did she have the third one and then a daughter, etc”? I’ll go by the Yoruba adage that says a person’s children should remain uncountable (laughs).

How My Mum Was Raped & She Conceived Me – Popular Comedienne, HELEN PAUL’s Shocking Revelation was last modified: April 8th, 2019 by Seye Kehinde

A DREAM THAT BECAME A REALITY: SUJIMOTO...