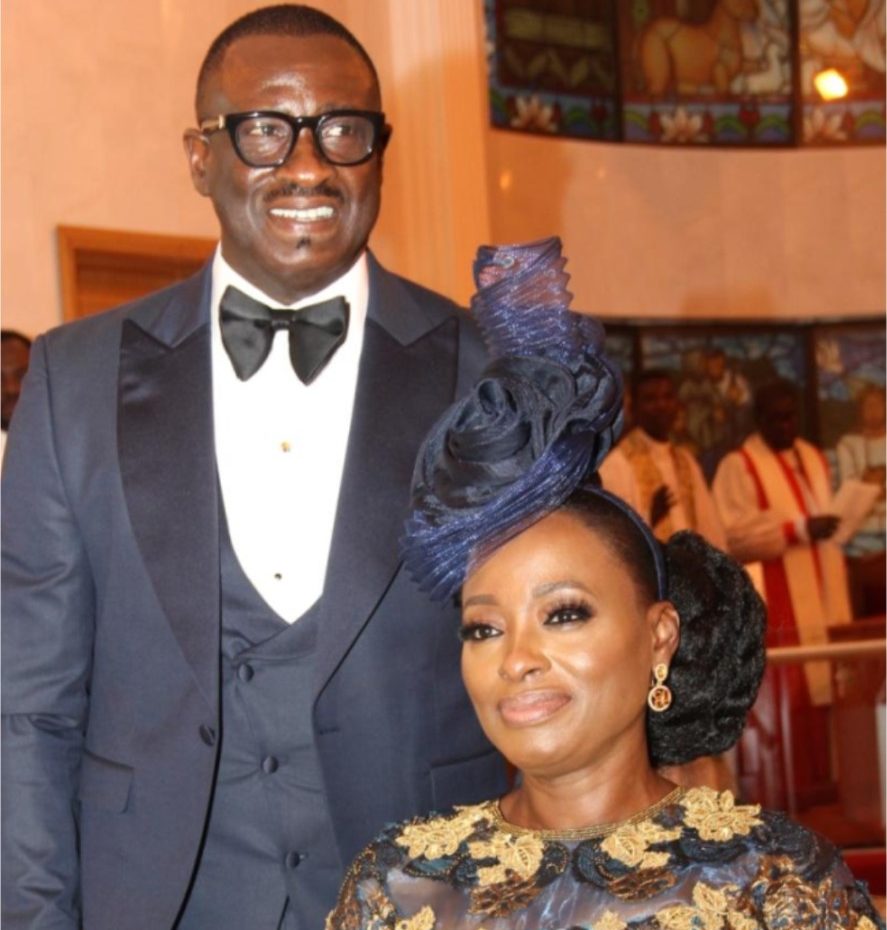 Call them the power couple, it best describes these two amazing beings who have been together for 29 years. Tayo and Tutu Ayeni are both successful entrepreneurs who are doing very well in their respective fields. They have both make marriage look so easy that they live it and still waxing strong. It is pretty difficult for a marriage to last long in this time and era when both partners are prominent within the social space but Tayo and Tutu have got the magic wand where they both made up their minds to apply basic principles in tackling any issues they are faced with, in their marriage. Their love story is very amazing having happened to share many memories together during their undergraduate days.

On Sunday, 24th November, the automobile magnate threw a classy 50th birthday for his wife. It was a colourful event that had many dignitaries in attendance. The beautiful birthday thanksgiving was brought to a high note with a classy dinner where guests were treated to a sumptuous meal and exotic drinks. It was a moment where Tayo and Tutu reignited their love and were in public display of love to the admiration of all. Theirs was a love story made in heaven.

Upon meeting his wife Adetutu at 17, as an undergraduate student of Law at the Lagos State University, Chairman of frontline auto company, Skymit Motors, Tayo Ayeni had vowed to make everything that concerns Adetutu paramount to him. In turn, Adetutu for many years she’s been married to Tayo has played a significant role in what her husband has become a highly successful man in his endeavors.

Tayo is known never to compromise when it comes to putting high octane events together, he is a professional extraordinaire. In 2013, when Tayo hit the golden age of 50, his birthday Soiree was indeed talk of the town. Memories from the day linger in the minds of those who attended. Adetutu Ayeni is a trained lawyer and a director of Skymit Motors Limited. She is the Managing Director of Space Properties and a member of the advisory council of Grange School.

Without a doubt, if Tayo Ayeni was to write a book on his success story, one name that will keep reoccurring will be Adetutu, a delectable soulmate. And for such a woman who is his jewel of inestimable value, nothing will be too much to celebrate her. Her high octane 50th birthday party was filled with distinguished personalities who all came together to celebrate with them and it was in their midst at the reception that the celebrants husband, Tayo Ayeni spoke glowingly about his wife of 29 years, he presented a lovely birthday tribute to his wife, in form of a poem reconfirming and rededicating his love for her and described her as a solid rock, supporter, and the God-sent, this beautiful show of affection was finally sealed with a kiss by the 2 love birds. He said “I want to say a big thank you to you Adetutu, mother of my children, Martin, Mathilda, Fisayo, Gbemiga and Muyiwa.my love, thank you for being my solid rock and a life partner. I am sure if it was not you, I wouldn’t have been married today because you have endured a lot, you have really endured a lot, you know, you endured through the bad and good times. You are indeed God sent to me, thank you, my lovely wife, may the next 50 years be more blessed, Adetutu, I love you forever”.

This forever love story ended on the dance floor where Tutu made her gracefully walk dancing to the rhythm of music looking so beautiful in a lovely net dress which she complimented with a beautiful hair fascinator. Her husband,

Tayo Ayeni is the Chairman/CEO of Skymit Motors Limited, an automobile company that was incorporated in 1986 as a Private Limited Company which has a yearly turnover level of five billion Naira today. He is also the Chairman of Affordable Cars Limited, a low and medium car sales and service outfit. He also heads Space Ventures Ltd, which deals in photographic materials; he is chairman of Space Properties, a real estate firm; Moontrends Holdings, a project financing and management firm, and Limoserve among others. Their beautiful marriage is blessed with 5 children who are doing well.