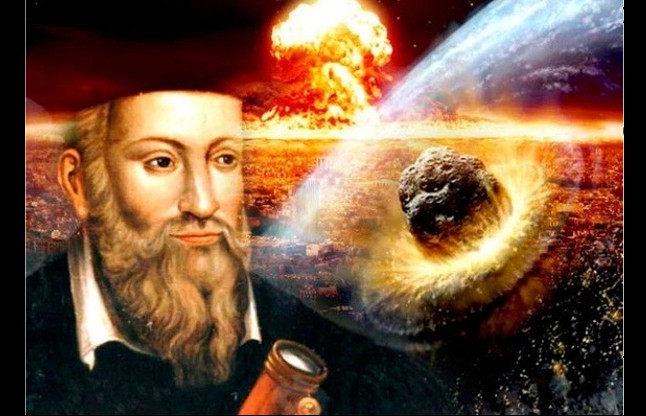 •Details Of What He Said Will Happen

Legendary Seer, Michele de Nostredame, also known as Nostradamus, is said to have predicted many historic events that occurred accurately and timely. His followers believe the 16th-century mystic foretold the rise of Adolf Hitler in 1933 and the assassination of John F Kennedy in 1963. According to the conspiracy theorist, CORONAVIRUS and the COVID-19 pandemic were predicted by the 16th-century mystic Nostradamus. Although it was documented that the pandemic was triggered by an unknown strain of coronavirus (SARS-CoV-2), there are many researchers who believe the world was warned nearly 500 years ago.

Scores of conspiracy theorists have flooded social media in recent weeks with claims Nostradamus knew of the COVID-19 chaos since 1555.

The majority of these predictions were published in Nostradamus’ 1555 book Les Propheties.

The predictions took the form of cryptic, four-lined poems known as QUATRAINS.

Although the quatrains are incredibly vague and rarely specify exact locations or people, many believe future events can be divined from the poems.

“The great plague of the maritime city

“Will not cease until there be avenged the death

“Of the just blood, condemned for a price without crime,

“Of the great lady outraged by pretense.”

Nostradamus predicted that there will be a world war in 2020, but not fought with weapons. some of his followers believe Coronavirus is the weapon.

One of the followers said, “Wuhan virus sounds great rather than naming COVID 19 or coronavirus. Even Nostradamus has also mentioned this name also ‘vuhwan’ in his prophecy.”

The passage in question is Century 2, Quatrain 56.

He wrote: “The sloping park, great calamity, “Through the Lands of the West and Lombardy, “The fire in the ship, plague and captivity; “‘Mercury in Sagittarius, Saturn fading.’” “Sloping Park – HANKO JIANGTAN Park in Wuhan has slopes to the river waterfront where people can walk into the water.

“Lands of the west and Lombardy – Europe, Australasia and America and Lombardy (Italy). “Fire in the ship – Ships symbolize trade, commerce and wealth, red considered color of fire. “Plague – Coronavirus

“Wuhan was placed under effective quarantine on January 23 as air and rail departures were suspended.”

But what are some other prophecies Nostradamus is said to have been correct about?

The bulk of these cryptic and incredibly vague prophecies was published in the 1555 book Les Propheties.

In one such quatrain, Nostradamus is said to have predicted the death of King Henry II of France in 1559.

The passage reads: “The young lion will overcome the older one, “On the field of combat in a single battle; “He will pierce his eyes through a golden cage, “Two wounds made one, then he dies a cruel death.” King Henry died during a jousting incident and was succeeded by his three sons.

The bloody French revolution brought about the end of the French monarchy and gave rise to the Republic.

The revolution took place a whole 200 years after Nostradamus’ death but many believe the mystic foresaw the event.

Nostradamus wrote: “From the enslaved populace, songs, chants and demands,

“While Princes and Lords are held captive in prisons. “These will in the future by headless idiots “Be received as divine prayers.”

Nostradamus’ writings are exploited in a number of fallacious ways

Brian Dunning, Skpetoid podcast. In one of his quatrains, Nostradamus wrote: “The blood of the just will commit fault at London, “Burnt through lightning of twenty threes the six: “The ancient lady will fall from her high place, “Several of the same sect will be killed.” Conspiracy theorists believe this is a reference to the devastating fire that began at a bakery on Pudding Lane in London, in 1666.

THE ASSASSINATION OF JOHN F KENNEDY-1963

On November 22, 1963, gunman Lee Harvey Oswald shot and killed the US President John F Kennedy in Dallas, Texas. Nostradamus’ followers believe he predicted the assassination in Century 1, Quatrain 27. Nostradamus wrote: “The great man will be struck down in the day by a thunderbolt, “The evil deed predicted by the bearer of a petition: “According to the prediction another falls at night.

HOW NOSTRADAMUS PREDICTED THE COLOUR OF PIG TO LORD FLORINVILLE

There is one incident from Nostradamus early prophetic experiences which have been handed down and are retold by all writers on Nostradamus. These stories date from the period of his travels through the time of their occurrence is not known.

Nostradamus was a guest of Lord Florinville at the castle of Faim, where he was attending professionally on Lord Florinville’s mother. The doctor and his host were crossing the courtyard where two little pigs, a black one and a white one, were running about as was the casual custom of livestock in those days. Lord Florinville said to the doctor,

“I suppose you can even foretell the fate of those two pigs!”

“Certainly I can,” replied the doctor. “We shall eat the black one, and a wolf will eat the white one.”

Lord Florinville saw a chance for a good joke on his guest. He privately instructed the cook to roast the white pig for supper. That evening, while they were feasting on succulent young pork, his lordship with huge mirth told Nostradamus that he was eating white pig. This the prophet vigorously denied.

The pig, he said, was the black one, as he had foretold. The cook was finally called to settle the argument. “Yes,” said the cook fearfully, “the pig was the black.” The white one had been killed and prepared as directed. But she had stepped out of the kitchen, before putting the pig in the oven, and a tame wolf had stepped in and was doing himself very well on the pig when the cook returned.

Not supposing that it would make any difference, the black one had then been quickly killed and served, exactly as predicted.

READ ALSO: 10 WAYS TO SAFEGUARD YOURSELF FROM CORONAVIRUS