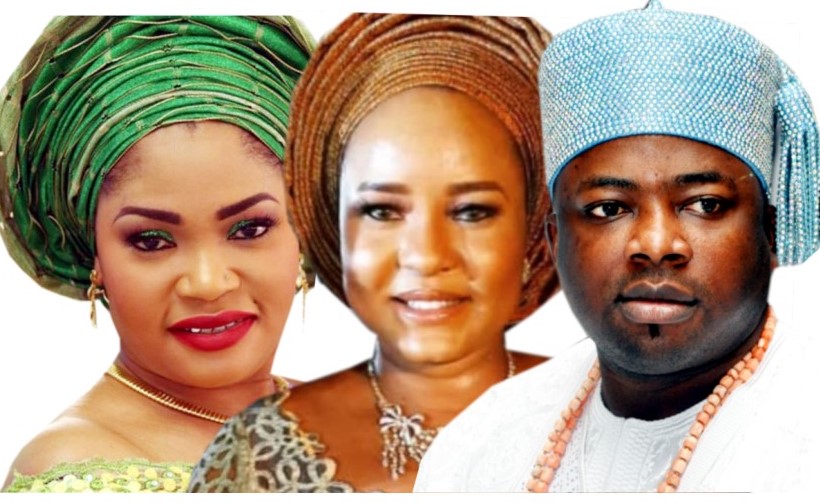 The royal wedding which was divided into 3 parts kicked off on Thursday Night with the bride, Hadiza Tanko dazzling like a bride that she is. The much talked about classy wedding kicked off with “Wuni (Sa lalle) which is strictly for the ladies. This is when the bride gets to spend her last free time with her friends and female members of her family, in her father’s house. Then a mixture of henna is made and used to make beautiful designs on the bride’s hands, palms and legs. Friends and family also get henna designs on their hands too which are not always as elaborate as the bride’s own.

This was followed by the “Kamu” which is like Hausa traditional wedding and it always takes place in the evening. The Kamun Amarya wedding night ceremony is where the bride’s friends and the groom’s family meet to negotiate about what they want before they let the bride join the groom. Kamu also means catch the bride and its one of the oldest practices in any Hausa wedding. This also adds more colour and glamour to any Hausa wedding. For Hadiza Tanko and Oba Ademola Elegushi, their Kamu was a mixture of Northern and Indian culture. The best Kamu event decorator handled the decor for the royal wedding. Due to the Yoruba guests who made it, there was a banquet chair arrangement for Kabiyesi’s friends.

The beautiful bride, Hadiza dazzled many when she walked out with her friends in a light teal coloured Komole matched with a well-wrapped dazzling Teal-Burnt Orange headgear. Many couldn’t help but admire the white expensive diamond which hung beautifully on her neck. That was the same diamond which Hajia Bola Shagaya rocked for her son’s wedding a few months ago. It is an exclusive white diamond worth many thousands of dollars made from Russia. She bought it from the biggest producer of rare diamonds in the world.

It was made strictly for her with her initials on it as she and her friends walked with grace and panache. She was dressed in a similar colour with her twin sister who also wore simple jewellery. Beaming with smiles she was full of happiness seeing her sister getting married.

Just like Hausa tradition demands it was followed by the “Sayan Baki”. This is a negotiation between the groomsmen and brides maids, debating on the amount to be paid before the bride is allowed to speak to her groom. The decorations are a reminiscence of a mixture between Arabian/Northern Nigeria and Indian culture.

The friends of the Groom were in white flowing Agbada as they negotiated and paid the bride’s family what is demanded of them. Also in attendance is Oba Saidi Elegushi’s mother, Olori Sinatu Elegushi and Oba Ademola Elegushi’s siblings. They were filled with joy marring Hadiza for the king.

The Nikkai was strictly a men’s affair at Jummat Mosque in Kano immediately after Jummah prayer beside the Yakasai family house. It was there that the Groom’s family paid the bride price and finalised the Nikkai Fathia while a reception took place later in the evening.

The beautiful bride who plays big in Oil and gas is the super-rich handsome Lagos stylish king who is one of Lagos most influential young king took many by surprise as he kept the royal wedding from public glare until it was broken by the brother of the bride, Salihu Tanko Yakasai.

The delectably stunning ‘Hadiza Tanko, is the younger sibling of the Special Adviser to the Kano State Governor, Alhaji Dr Umaru Ganduje, that’s talking about SalihuTanko Yakasai. Dr Umaru Ganduje himself was also present at the wedding. The very excited elder brother of Hadiza had taken to his social media pages on both Twitter and Instagram to happily announce the upcoming wedding, excitedly inviting the whole world to be there to celebrate with the family. The light-skinned Hadiza, who is a stunner par excellence we hear has been the heartthrob of the young king who is in his early 40s for over 3 years now.

How did Olori Elegushi take the news, you may ask? According to our source, Kabiyesi informed his First wife, Olori Sekinat Aramide Elegushi about his intention to get a new wife. Though as a woman, no woman will want a rival but she was said to have since accepted it since that is what her husband wants. Of course, this doesn’t diminish Kabiyesi’s love for her.

Don’t also forget that tradition permits Kabiyesi to marry more than one wife and Islam doesn’t forbid it either.

Why a Northern bride you may ask? City People investigations revealed that a northern wife doesn’t do wife rivalry.  She understands the senior wife is her senior and calls her “Mama “or Aunty, unlike a Yoruba rivalry. They also hardly do clique of friends, so Olori Aramide Elesgushi may not have any issue with her.

It was further revealed that Kabiyesi loves his wife Olori Aramide so much that he doesn’t want any rivalry at the palace. It was even said that this was one of the reasons why he settled for Hadiza whom many said is so reserved and highly respectful.

Will this also stop the first wife from attending Owambe together with Kabiyesi? This is also a capital No. Oba Ademola Elegushi will also be attending parties with his wife as a northern bride is taught to stay indoors.

The first wife of “Oba Saheed Ademola, Kusenla, Olori Aramide Elegushi has 3 very gorgeous and extremely smart daughters. They both met when they both were still at the University years back. When they got married in 2003, making it 16 years come May 24, it was a big event then, with K1 the ultimate and KSA on the bandstand.