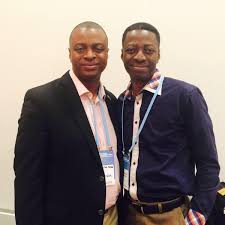 They are both popular pastors because of the large congregations of youths and adults who attend their church services. One striking thing about them is that they look alike. It will interest you to know that they are the first to become pastors in their family and they have excelled at it. The Rev. Sam Adeyemi pastors one of the largest congregation in Nigeria, which is mostly dominated by the youth he grooms to be leaders.

His church is a fast-growing, life-changing church committed to “raising role models”. He is also the President of Success Power International, an NGO, that, among other things, specialises in organising financial, leadership and motivational seminars and President of Daystar Leadership Academy, a leadership school for business owners and ministers of the Gospel.

His brother, the Rev Victor Adeyemi, is the founder of Global Harvest Church with branches in Nigeria and abroad. He travels widely to several nations of the world preaching, teaching and healing the sick. He is a regular speaker at seminars and conferences around Nigeria and the world at large. He is passionate about evangelism and is committed to organising crusades around the globe. He reaches out by Television and publications.

Both brothers  are successful ministers of God. Not many know that they started off in Ilorin, Kwara State and they have been in the ministry for over 30 years. They both entered into full time ministry after joining Rhema Chapel, under the leadership of The Rev. George Adegboye in Kwara State.

Though the Adeyemis were born into a religious home in Odo-Ere, Yagba-West Local Government Area in Kogi State, they became the first members of their family to become ministers of God. That happened when they joined Rhema Chapel International Church, under the ministry of The  Rev. George Adegboye, who believed so much in the two that he made The Rev. Sam Adeyemi the Director of Pastoral Care before he later made him Minister in Charge, and later posted him to Lagos. Pastor SamAdeyemi once spoke about why he left Rhema Chapel to start Daystar Church, In his words” I can still remember clearly, I felt like my ministry was stagnated and things were not moving for me. So, I decided to pray. I remember that day in April 1994, my wife and I went to Lekki beach, fasting and to pray. I was praying, asking God about the next level, where do I go from here?”

God spoke to me and asked me to continue with the prayer and fasting. After days, He said I should stop the fasting, but go ahead with the prayer and I obeyed.  “Sometime in July that year, the Lord spoke to me clearly one morning that He was going to take me to the next level of the ministry, to teach Biblical success principles. He said I would not be able to do the things He wanted me to do in my former pastorate, because He was asking me to teach success on radio, television, tapes, publications and seminars. In addition, I was to establish a church that would help people discover and realise their potential. I got the vision for Success Power International and Daystar Christian Centre on the same day. On November 18, 1995, Daystar Christian Centre was inaugurated.

Also his younger brother, The Rev Victor narrated his journey into the ministry under the leadership of Rhema Chapel Pastor, The Rev George Adegboye, on his official page when he celebrated his 30 years in the ministry entitled ‘’30 years of ministry— How it all started’’

“Victor, you are preaching at the birthday celebration this evening,” Brother George said to me after the Holy Ghost Caucus All Night Prayer meeting of August 22/23, 1986. All my pleas fell on deaf ears as fear gripped my heart. His first son, Faith, had turned a year old on Friday August 22, but had the celebration postponed to Saturday to maintain focus on the All Night prayer meeting that was part of spiritual preparations for an upcoming city-wide crusade.

“I had joined this growing fellowship of about 40 people comprising majorly university and polytechnic students in May 1985. The small group of believers met in the sitting room of The Rev George Adegboye, who was to be ordained in November 1986, but was at the time popularly called Brother George.

“Becoming a remedial studies student of Kwara State Polytechnic was to create the opportunity of a very close and eventually intimate mentor/protege relationship between myself and Rev George. I learnt how to witness, minister the Holy Spirit, study the Bible, preach, relate with people and even how to eat Amala and Abula (a local Nigerian Yoruba delicacy). His influence was massive and his passion for spiritual things was very contagious.

Other more mature leaders at the Holy Ghost Caucus fed us with the Word from time to time including The Rev George’s cousin, Joseph Saliu who was instrumental to my joining the fellowship, Akin Oni, Moji Adeyemi (my uncle who led me to Christ and ministered the Holy Ghost to me), Emmanuel Olowodola Snr and others. When I was asked to preach before some of the above spiritual giants and many others, the feeling of trepidation overwhelmed me.

I could only catch 2 hours of sleep after the All Night prayer as I got back to praying and preparing for what would be my very first sermon after giving my life to Christ. I remember picking ‘Salvation and Evangelism’ as the sermon’s title. 15 minutes into preaching, I ran out of what to say. Brother George wanted to use the occasion to confirm his perception that I was called into the ministry. The result of his confirmation would be the opportunities he began to give me at the tender age of 17 to preach in High Schools, Tertiary institutions, Churches, Chapters of Full Gospel Business Men’s Fellowship and eventually to be the pioneer pastor of Rhema Chapel Ibadan. 30 years later, I’m still preaching to the glory of God.

Looking back today, my heart is filled with gratitude for the honour and privilege to have served the Lord behind the pulpit all these years and I count it the highest honour to be entrusted with the life-changing gospel of Jesus Christ.

A few lessons of the last 30 years will be a blessing to young ministers and so I will endeavour to share them in a few articles. For today, just spend a few seconds thanking God for me that he called me to preach.

As both brothers  had made a success of their careers, so also is their marriage. Pastor Sam Adeyemi is married to Pastor Nike Adeyemi, who is passionate about social service. She runs The Real Women Foundation. She also sits atop Pneuma Publishing Limited and Daystar Children Centre. She graduated from the University of Ife (now Obafemi Awolowo University) with a B.sc and M.sc in Architecture in 1989 and 1991 respectively.

The architect-turned-pastor is the Director, Women Ministries of Daystar Christian Church and the President of Real Women Foundation, a motivational and healing ministry for women. The marriage is blessed with 3 children.  Rev Victor Adeyemi is married to his beautiful wife, Jumoke Adeyemi, who is the Co-Pastor of Global Harvest Church. She is the host of several conferences and meetings both in and out of the country. ‘Mama’ as she is fondly called, is a passionate preacher, who holds a master’s degree in personnel psychology from the University of Ibadan and their union is blessed with four children.

I just Summoned the DG of NYSC – Minister