HOW PREPARATION FOR BUHARI’S CAMPAIGN COULD END APAPA GRIDLOCK 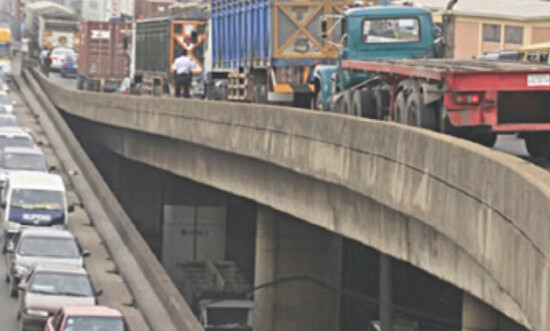 It might not be business as usual after Saturday’s APC Presidential campaign in Lagos for truck drivers who bribed government officers N10,000 to N20,000 to park on bridges of the metropolitan Lagos as the racket has been unveiled on a radio programme as the inducement for the defiance of the truck drivers. A national daily also did a magazine report on the racket.

President Muhammadu Buhari’s visit to Lagos tomorrow to beg indigenes and residents of the state to support him for a second term has therefore turned out a blessing beyond political horizon and electoral fortune.

It might put a permanent end to Apapa gridlock. As the presidential campaign train will berth at the National Stadium, Surulere tomorrow, preparation to give the number one citizen a smooth drive to and out of the husting site has however, believed the claim that the trucks and tankers-induced permanent traffic logjam on major roads that lead to Apapa cummulating into Apapa gridlock is insurmountable.

Apapa gridlock has defied solution in the last few years. Thus denying the country of huge sum of revenue, besides wasting millions of manhours held up in traffic logjam that could be reduce to Nigeria unit. The truck drivers made pretention to a claim that the traffic bog-down was inevitable. The ballon of the false has been punctured.

The federal government, on its part, on Wednesday reopened the outward bound stretch of Leventis Bridge at Apapa that had been closed to traffic since last year for repair. The other half of the bridge was reopened to traffic last year.

The icing on the cake of the exposure that the President’s visit has brought to the fore is that pedestrians and commutters alike on most roads that lead to Apapa, Nigeria’s gateway port, could not but be surprised that trucks that were stationed on those bridges and roads are no longer there.

Their disappearance has raised the question on where they might have been taking to City People learnt that the permanent parking of the trucks was not without the connivance of government officers who were smiling to the bank everyday as they collected illegal toll that allowed the trucks to be stationary on the bridges.

Each truck, it was learnt paid from N10,000 to N20,000 to government officer to be on the bridges. The officers could not feign ignorance that the bridges national assets, are for moving vehicls which must not under any circumstance, be turned into parking space for trucks.

It is beyond point that the trucks were threats to the life-span and of the bridges. With a permanent load on them, any of the bridges could collapse any time with the attendant loss of lives and destruction of property.

Recall that Senator Ahmed Tinubu and his successor in the Alausa Government House, Raji Fashola did not brook the indiscipline of parking permanently on the bridges. Asiwaju Tinubu, in his tenure, built a truck park at Orile-Iganmu area to obviate the nuisance of truck drivers.

HOW PREPARATION FOR BUHARI’S CAMPAIGN COULD END APAPA GRIDLOCK was last modified: February 8th, 2019 by Reporter