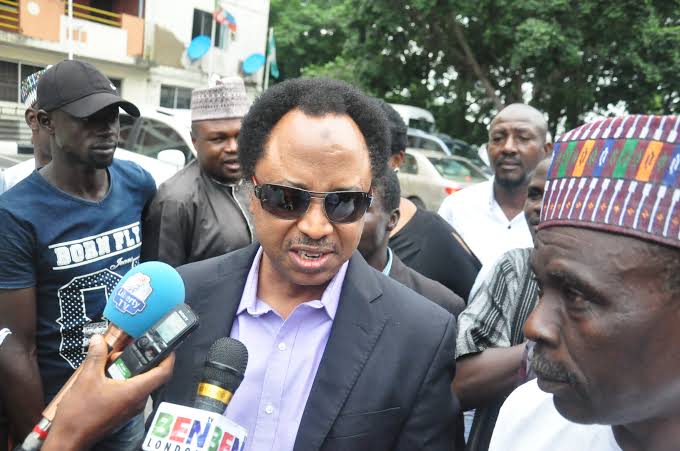 Senator Shehu Sanni is a very popular politician from Kaduna. He was a Senator in the last Senate.

Last week, he spoke to City People via the weekly Instagram Live Chat about Pres. Muhammadu Buhari’s handling of the #EndSARS protest.

His initial comments on the President’s speech went viral the night of the speech.

He was quoted as saying we begged the President to speak and after he spoke with were speechless.

Below are excerpts of his chat.

Kindly share with us your thoughts on all that is going on in the country right now, what do you make of the whole thing over the 2 weeks?

Well, the fact on the ground in the last few weeks is that Nigerians particularly young people have stood up to challenge the established authority, triggered by Police Brutality and Cruelty.

The section of the Police which was the SARS. And that protest has consciously brought thousands of Nigerians to the street and has exposed a number of things. As a democracy, they have the right to protest but unfortunately, the protest was badly handled. Badly handled by the security agencies, by the political establishment and also by the use of thugs either against the protesters or the thugs hijacking the whole protest that is supposed to be peaceful and orderly. The protest is the first time in the history of Nigeria that man’s uprising has shaken the foundation of state and has also sent a clear message to people in power, that as long as there is injustice, inequity and oppression in the land, there will be a time people are going to rise.

We have seen the rise of a new generation of activists who are between the range of 18 to 28, and 29, the generation that were shaped by social media and the internet. A generation that is daring, courageous and influenced by events globally.

A generation that is free from incumbrances, the impediment and the limitation of the old ones, in terms of Tribalism, Ethnicity, Religion and Sectionalism. But unfortunately, the protest was manipulated by those who want to discredit it and end it by trying to leave its original outlook which is unfortunate and I believe that if the government has acted early in the earlier days of the protest in terms of addressing the demands of the young people we couldn’t have found ourself where we are today. But we have reached a point where the older ones who are in power are threatening them, they want to order them and if you look at the thinking of these young people, you better listen to them rather than order them and try to dictate to them, so this is what happened.

Were you surprised at the organisational level at which they took the whole process in terms of funding and structure?

Well, I am not surprised because in the last 20 years plus we have seen the rise of new generation of activists who are influenced by similar events globally. Like the protest in Sudan, the one in Algeria, and the one black live matters in the United States.

There is this favourite quote of yours that everybody is talking about now, about the President’s speech. What made you come to that conclusion?

Were you expecting anything better than that from the President?

There were lots of expectations in the sense that people are protesting for weeks and it was the time for the President to speak and all he did was to narrate what they have been doing. He also narrated the program and policy of the government and then it ended up with threats and order against the young people.

And if you look at these young generations, they are not people you can easily threaten, this is not 1985.

What was expected of President was that, he will say I have inaugurated a panel to go round and check the loss of lives and properties with the view of compensation and then tender formal apology to young people.

That would have worked and calm people down. The generation of the young people we have today is not the generation of their fathers and mothers. That speech is okay in 20th century. People would be afraid. They will start trembling, but if you look at these young people, these are people whose lives are not shaped by our own history. They have their own history. And they are not people who are shaped by Awolowo, Ahmadu Bello e.t.c.

These are people who have grown up in an information age, where they have formed a global tribe and they have the capacity to mobilise funds for protest and attract the thinking of celebrities and political leaders globally to their course.