How Sen. OLUREMI TINUBU Became A Pastor In REDEEMED •What City People Found Out 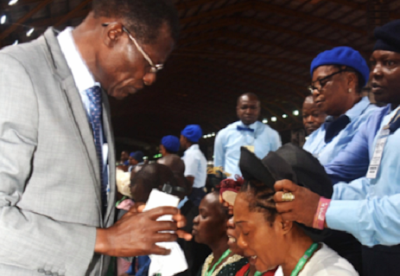 The 66th Annual Convention of the Redeemed Christian Church of God (RCCG) held last week. As part of the activities lined up for the convention, the General Overseer of the church, Pastor EA Adeboye, ordained over 3000 candidates as Assistant Pastor and Pastors respectively. The national leader of the All Progressives’ Congress (APC), Asiwaju Bola Ahmed Tinubu’s wife, Senator Oluremi Tinubu, representing Lagos Central Senatorial District, was ordained during the convention and the APC’s leader was there to witness the event.

Her ordination was done by Pastor Adewole Haastrup, the Assistant General Overseer at the Old Arena of RCCG, Lagos/Ibadan Expressway. The  theme of the convention  was: “Dominion”.

To become a pastor in RCCG, one must have gone through Baptismal preparatory stages and workers in training class. A candidate must have completed a one-year course at the church’s School of Disciples and consistently participating in church’s activities and programmes. The person must also be a worker who has served in different or specific positions in the parish he attends and recommended by senior pastors for ordination. These were the stages Senator Remi passed through and became a deacon of the church for many years until her ordination as a pastor took place last week. The National Overseer of the Church, Pastor Joseph Obayemi, presented the 3,406 candidates to the General Overseer, Pastor Enoch Adejare Adeboye to be ordained to the office of assistant pastors in the church after due examination by relevant authorities. After the presentation, the General Overseer explained that ordination into the office of assistant pastors of RCCG is done with anointing with oil, laying of hands, proclamation and prayer and they all filed out for the anointing which symbolizes the official stamp on them to operate in the office of assistant pastors in the mission which was led by Pastor (Mrs) Foluke Adeboye.

Chief (Mrs) Oluremi Tinubu, has never hidden the fact that she is a Christian and a practising one at that. She supports anything that has to do with the church especially The Redeemed Christian Church of God where she is now a Pastor. Her beautiful life and encounter with Christ started several decades ago and she has kept her faith intact ever since she allied with the things of God. Despite being married to a muslim has not, in any way, deterred her from the things of God. Infact, her husband is seen to be her number one fan when it comes to her religion. No wonder her marriage has lasted over 25 years despite that the couple practise different religion. On one occasion, Asiwaju spoke glowingly about his wife being a Christian who is very dedicated to her religion. He said he had never seen anyone so organised like his wife, “For Remi, my wife who is here, very detailed, if you are looking for somebody who has got me organised a bit, it is my wife. She never jokes with the things of God and you cannot find her being late to church”.

Apart from the fact that she is now a pastor, she shares a close mother-sister relationship with the Adeboyes especially Mummy GO, Pastor Foluke Adeboye. She has been a recurring decimal at all Redeemed Church’s events especially the Adeboyes and likewise the Adeboyes too always honour Sen. Remi Tinubu at her events.

“I am not a pastor; I am just a deaconess, but I am a graduate of  Bible College. Mama Adeboye is a spiritual mother to me. I remember when I approached her that I was going to the Senate, she said ‘make sure you stand for God.’ I can never forget. Going for a second term, I have already gone to them, so, I have spiritual parents who I don’t want to put to shame and of course, don’t want to put my family to shame. So, I know what the faith entails me to do”. She was also at Mama’s 70th birthday and spoke glowing of her and her husband, Pastor Adeboye, in her words while coordinating the cake cutting she said “Praise the Lord, we celebrate our mother today on behalf of the pastors and elders of our parish, the throne of grace which is the headquarters of the Redeemed Christian Church of God. We celebrate our mother,who has millions if not billions of children. Today, I was just thinking about an awesome life and what can you say about a woman, all she has ever done is to show people the way of the Lord through her Lord and saviour, Jesus Christ. I came to know this Lord because of our wonderful mother here. Mummy, you will live long to celebrate many more years in joy, happiness and in divine health and Daddy, you are not left alone, you chose well and you just preached to us that without Sarah, Abraham will not become father of all nations, without our mother here, I don’t think what we are celebrating in Redeemed Church Worldwide today would have been possible. I celebrate both of you. Congratulations ma”.

The 58-year-old senator and a former first lady of Lagos State is happily blessed with children. She is the youngest of 12 children of her parents and she was raised in Ogun State, but an indigene of the Itse-Kiri land in Nigeria. Oluremi Tinubu is a holder of a National Certicate of Education in Botany and Zoology from Adeyemi College of Education, Ondo State. She thereafter obtained a Bachelor’s degree in Biology Education from Obafemi Awolowo University, Ile-Ife. She attended Our Lady of Apostle for her high school. Oluremi Tinubu became First Lady of Lagos State when her husband, his Excellency Asiwaju Bola Ahmed Tinubu became the Governor between 1999 and 2007. Her interests lie in the promotion of the human rights and dignity of the poor, disadvantaged and most vulnerable members of the society. One of her major achievements as a First Lady from 1999 to 2007 was the establishment of New Era Foundation, a non-profit organisation, NGO dedicated to youth development, girl-child education, women empowerment and inspiring young persons to excellence. Oluremi Tinubu has executed a lot of philanthropic programmes to alleviate the plight of indigent persons and most importantly, she has touched the lives of girls and women in her constituency.She has also written a number of publications; including an auto-biography- The Journey of Grace – My Faith Walk. Therefore, in recognition of her achievements and contributions to societal development, Oluremi Tinubu has been honoured both locally and internationally and has also bagged several other awards including chieftaincy titles.

How Sen. OLUREMI TINUBU Became A Pastor In REDEEMED •What City People Found Out was last modified: August 13th, 2018 by Tayo Oyediji