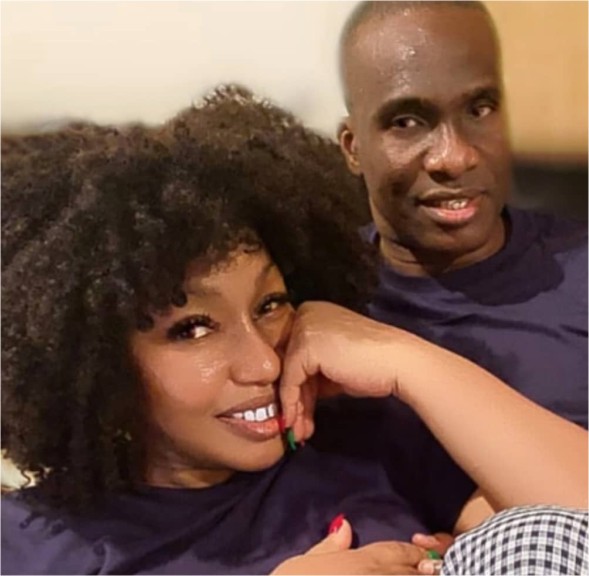 •Details Of Her Lover Revealed

For many years that star actress Rita Dominic has been gracing the TV screen, she has not really been linked with any man except for her acting partner Jim Iyke, so when the news of her engagement filtered into town, everyone was surprised. All her fans on social media were excited for her. She found love at 45. She is the happiest woman at the moment following her engagement to Fidelis Anosike, the chairman of Daily Times. Fidelis who is in his early 50s is a prominent socialite who is well known among celebrities. He is a well respected big boy.

This revelation was made known by Rita Dominic herself on a weekend where she revealed her lover after keeping his identity under wraps for years. Her new lover is Fidelis Anosike, founder of Folio Media Group, a multimedia company that owns Daily Times Nigeria. Rita Dominic shared photos of herself and Anosike on her Instagram handle and her fans went wild with excitement.

Rita is one of the actresses who is extremely private about her love life. This is the first time the sultry actress would ever showcase her lover or give hints of his identity on social media. In one of the photos, Rita Dominic and her man are clad in matching pyjamas while holding champagne flutes. In the second photo, Anosike hugs her from behind as they both smile at the camera. Although they have been romantically linked to each other in the past, this is the first time the actress will be confirming the rumours.

The 45-year-old star actress has managed to keep her love life away from the public but finally comes out in the open. She posted some lovely photos with Anosike while wishing her fans a Merry Christmas. Dominic, who wore the same casual outfit as her partner, captioned the photos “Merry Christmas” with love emojis. The post set her 6.8 million followers on the platform and friends into some frenzy.

Fidelis Anosike has close ties to the entertainment industry as he is the organiser of The Miss Nigeria pageant. The 45-year-old actress has never been married and is one of Nollywood’s most eligible bachelorettes. Rita Dominic has vowed that she won’t rush into marriage to please the public. The Mbaise, Imo State-born screen diva, made this declaration while featuring in a new movie. She once shared her thoughts on marriage and children, the reason behind going public with her relationship and how she has been able to stay relevant for over 23 years now.

Speaking on the issue of relationships and marriage, the actress said “I respect the institution of marriage as my parents were married until death literally parted them and they had a beautiful relationship. The problem is at some point, it begins to annoy you because of how much importance people have placed on it.

“I do want to marry, and I want to get it right once and for all. You know, we make such a big deal of it; we force people and put pressure on them to go in. When they eventually rush into this union, they make mistakes because they were only trying to please people.”

On the reason behind the revelation, the actress said “Once in a while, you want to share certain things with people, and I felt like my lover had been there for me for decades. We all had a bad year last year with COVID, and we could do with some happiness.”

Their love story started four years ago in Lagos when their path crossed and as they say, the rest is history. Rita and Anosike met in Lagos during the 2017 Africa International Film Festival (AFRIFF) session on film business which had government representatives, business leaders and development agencies as well as media entrepreneurs and top executives. The duo is planning a destination party before the year runs out. Their wedding was supposed to take place in April but plans changed as expected.

She is a multiple award-winning actress, producer, and Co-Founder of The Audrey Silva Company. Her first starring role was in the Nollywood hit movie A Time To Kill. Since then, she has become known for her ability to thoroughly embody characters and continues to receive critical acclaim for her portrayal of iconic roles.

The youngest of four children, Rita was born into the Royal Waturuocha family of Aboh Mbaise. Rita started acting in local television dramas at the age of 5 and graduated from the University of Port Harcourt with a BA in Theatre Arts *before joining the Nigerian film industry in 1998. Rita is best known for her roles in the groundbreaking films “76”, The Meeting and Shattered for which she won several prestigious awards. She is the only actress to have won the AMVCAs Best Actress award in both the Drama and Comedy categories. She is also the only West African actress to have won Kenya’s Kalasha Awards. Undisputedly one of Africa’s biggest movie stars, CNN describes her as a ‘Silver screen icon’, “embodying a range of colourful characters”. Rita was just recently appointed by the Afrexim Bank to be an IATF Goodwill Ambassador. She has been an Ambassador of several global brands in Nigeria.

Her hubby, the wealthy Fidelis Anosike is the founder of Folio Media Group, a multi-media company that owns Daily Times Nigeria (founded 1926), the country’s oldest and most noteworthy newspaper. A graduate with a Bachelor of Arts in Creative & Applied Fine Arts from The University of Benin and the OPM Program at Harvard Business School.

READ ALSO: 7 WAYS TO TELL YOUR MAN STILL CARES ABOUT YOU

7 Ways To Tell Your Man Still Cares About You