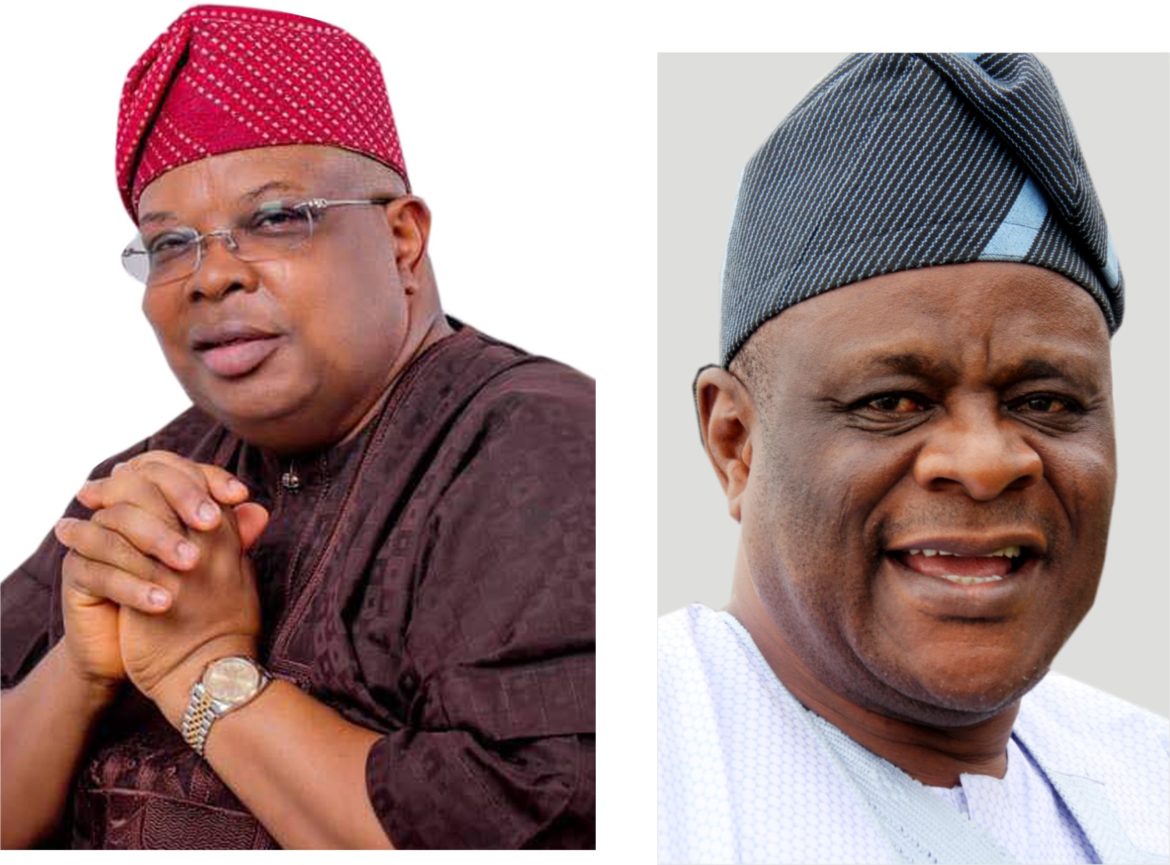 The battle for the APC primaries in Oyo State to see who picks up the party’s ticket for the gubernatorial elections come next year is already heating up. Many have aptly described the forthcoming primaries as the clash of the Titans as every single aspirant, this time, has been adjudged eminently qualified and deserving of the ticket. But one aspirant that stands out like the northern star from the rest of the pack is Joseph Olasunkanmi Tegbe, a man many political juggernauts have identified as the contestant most suitable and equipped with sufficient knowledge in governance to take the state to the next level. This is because, unknown to the larger public, Engnr. Tegbe has been playing very significant advisory roles to many state governments within the country, a responsibility he has been undertaking for several years running. He’s played pivotal roles in several economic reforms that have yielded huge dividends across the country and will certainly be bringing all of these experiences to bear if and when he gets the people’s mandate to serve as their governor come 2019. An incredibly brilliant man whose sense of humility is legendary, this accomplished technocrat is hugely loved by his people, whom he offers various forms of succour through scholarships to indigent students, financial support for widows and several other empowerment programmes. Little wonder why, despite being possibly the last of the aspirants to officially declare his intention to contest for the governorship, Olasunkanmi Tegbe, within only a short time, has emerged one of the top contenders for the job. Last week, City People’s Senior Editor, WALE LAWAL had a brief chat with Mr. Tunde Oloboru, the chairman of Engnr. Tegbe’s Campaign Organisation. Mr. Tunde Oloburo, a long time friend and ally of Tegbe, is a successful businessman by all standards, having flourished in several businesses including importation of various goods and the exportation of cashew nuts, cocoa and several other cash crops. Presently, he is into civil engineering and Real Estate business. This soft-spoken, quiet and highly intelligent gentleman spoke glowingly about his friend and gubernatorial candidate, Olasunkanmi Tegbe, and explained why it has been an easy task for him to sell his candidate to the people of Oyo State and project him as the man most eminently qualified to steer the affairs of the state come 2019. Below are excerpts of his campaign Chairman Tunde Oloburo’s interview with City People’s WALE LAWAL. This interview was conducted before the primaries.

Take us through a bit of your background, sir…

Well, I am a businessman. I‘ve been in business for quite some time. After I left school, I worked briefly with West African Portland Cement. I worked in their sales department for about six years before leaving to set up my own business. It was basically a trading outfit. After a few years, precisely in 1991, I veered off into both the import and export business. I was into the exportation of cashew nuts, cocoa and some other cash crops. Then, that led me into importation, using the proceeds of export to bring in imports. So, I did importation business for like fifteen years, then, I decided to go into civil engineering, majorly in government contracts, building roads and some other related construction businesses. And we did a few jobs also with some oil companies. We are one of the contractors with a few oil companies. After a few years of our involvement with civil engineering, we did a lot of jobs with some state governments and federal governments, then, we veered off into real estate.

So, real estate business is all that you’re doing right now?

No, not really, presently, we are into both Real Estate and Civil Engineering.

When did the real estate arm of your business take off?

Not quite long, I think it’s just about three years ago now.

And how have you found the terrain so far?

Well, one of the reasons why we went into real estate is because the government had made it a habit of owing us, so we thought since we were already into civil engineering, we felt that instead of waiting endlessly for the time our monies will be paid, it is necessary we get ourselves busy. And that was how we diversified into real estate.

Let us talk about you and politics, how did you get into it?

Well, for several years now, I’ve always been a stakeholder in politics, but only decided to go fully into politics about two years ago. I can tell you that I’m very actively involved in politics right now. I am presently the chairman of the campaign committee of one of the leading APC gubernatorial aspirants in Oyo State, Olasunkanmi Tegbe. I am the chairman of his campaign organization.

What’s your take on the speculation making the rounds in Oyo state that the incumbent governor already has his anointed candidate and that other aspirants are merely wasting their time and resources?

The governor has said it several times that he has no anointed candidate, each candidate has his own CV, each one has his own pedigree. The beautiful thing about all the APC candidates in Oyo State is that they are all qualified. But I believe my own candidate is even more eminently qualified. He’s a top rated professional and he’s somebody that has been playing significant roles for so many governments in the states and even for the federal government. That has actually prepared him for the position he’s vying for. And I must say this, Olasunkanmi Tegbe is humility personified. He’s also a highly cerebral personality who has adequately prepared himself for that enviable position of the office of the governor of Oyo State. He’s a God-fearing person too, and he’s ready to continue the wonderful work of the incumbent governor. I have no doubt that, if given the opportunity, the people of Oyo State will have no regrets voting him as their governor.

What do you think is Olasunkanmi Tegbe’s greatest strength? What edge do you think he has over others, in terms of experience, that will put him in good stead in the coming elections?

Talking about experience, this is somebody that has been playing advisory roles for so many governments in Nigeria, with about 25 to 26 states in the country benefit from his wealth of experience as he offers them various forms of advice that go a long way in helping them govern their various states well. He even plays similar roles outside of the shores of this country, so you just cannot dismiss his wealth of experience and knowledge. Currently, he has also been playing very significant roles for the federal government. Olasunkanmi  Tegbe has been part of the wonderful efforts of so many governments in Nigeria. The government terrain is not new to him, he has been part and parcel of governance within the country, so, coming fully into government will not be a new thing to him. For so many years, he has been involved in the blueprint of so many governments. He has been involved in a lot of economic reforms at the state and federal level, so he’s well prepared. Before veering into politics fully to contest for a governorship, he has been a Senior Partner at KPMG. In fact, currently, he heads their Technology Advisory Services and Markets unit in the whole of Africa.

Okay, that’s great. I was just going to ask you to let us into his bio-data, how accomplished he is in the private sector…

(Cuts in) Oh, I can guarantee you the man has an intimidating CV. When you take a look at his CV, you will understand what I’m talking about. I’m talking about a man that graduated from the University of Ife with the first class in Civil Engineering and after two or three years, he decided to go into Accounting. Today, he’s not only a Chartered Accountant, he’s a Fellow. So, with just a snippet into his CV, you can see he has more than enough to prepare him the task ahead and he’s got about thirty years working experience, so, definitely, he’s well prepared for the position.

Before now, has he contested for any elective position?

No, he’s a full-fledged technocrat. He’s been a technocrat in politics all this while.

And what has been his relationship with his people over the years? Is he close to the grassroots? Has he put in place structures that have endeared him to his people?

He established a scholarship about ten years ago, giving out scholarships to indigent students, helping widows, etc. Olasunkanmi Tegbe has always been a great philanthropist but a silent one. He doesn’t make noise or draw attention to the things he does for his people.

So, what do you think are his chances of winning the APC primaries, looking at the calibre of people he will be contesting the ticket with?

His chances are extremely bright. He has a great deal of chance to win the elections. And he has been highly accepted by people. Apart from his intimidating CV, you only need to relate with him for a short while to know that he’s a very humble human being and a God fearing person, and these go a long way when you talk about the art of governance. If you’re governing a people, no matter who you are, if you’re not humble and God-fearing, you certainly will not be able to govern well. And like I said earlier, he has been highly accepted by the people, so, his chances are very, very bright.

You sound very confident of your candidate and product. As the chairman of his campaign committee, how has his impressive quality rubbed off on your responsibilities in terms of selling him to the people of Oyo state?

Well, to God to be the glory. You know, when you have a good product, it’s easy to sell. Persuading people to accept your product becomes a walk in the park. His pedigree and achievements speak for him. His impressive quality has helped us a great deal. He’s a good product and marketing him to the people has been easy. You know, he launched his campaign to contest for the governorship in June and today, he’s become one of the leading aspirants. I think that speaks volume of the strength of his character, his quality, and his pedigree. People have been able to quickly identify him as somebody that is God-fearing and humble. He’s somebody I’ve known for over 45 years so I should know what I’m talking about.