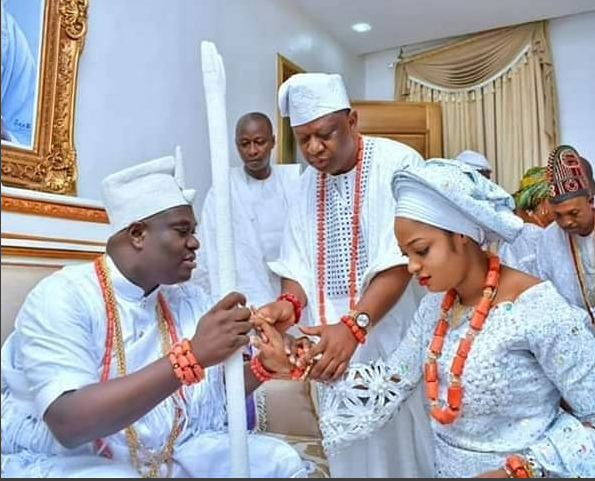 +How OONI Bought Her 3 Cars As Gifts

The residence of Ijako Estate, Akure of the Oluwaseyi bubbled penultimate Thursday, 18th of October, as the royal Entourage of his Imperial Majesty, Oba Adeyeye Enitan Ogunwusi stormed the residence of Evangelist, Prophetess Shilekunola Morenike Naomi, to seek her hand in marriage.

Remember that Ooni is the first among equals in Yorubaland. He symbolizes the race.

The royal wedding, which was kept away from the public and media glare paraded those who matter to Kabiyesi and his new found love, Naomi.

Of course, it came as a surprise to many, who have been waiting for Oonirisa’s royal announcement of who his new Oloori would be since his first marriage packed up many month ago.. In fact, many names have been speculated as would be Oloori until Kabiyesi made his announcement at a few minutes past noon on his Instagram handle, saying: “I waited upon the Almighty the King of kings, He eventually did it in the midst of many trials. Shilekunola Moronike Naomi, the greatest Arsenal you can apply on this highly revered throne with many rules and regulations in the midst of undiluted tradition, heritage and culture is the “fear of God in you”, which is the beginning of your wisdom on this throne of Oduduwa. You are welcome home my beautiful and adorable Queen.

Who is Prophetess Naomi Oluwaseyi? How did Kabiyesi meet her? How long have they known each other? What is tradition’s role in the royal wedding? How did she give her life to Christ? How did she start her church EN-HERALD many years ago?”.

Let us gist you about Prophetess Naomi. She is the 25 years old founder of a popular Akure church, En-Heralds, at Sunview Hotel Alagbaka, Akure. It is a big church that boasts of more than 1,000-strong congregation. She started the church 7 years ago, while she started her public Evegelism 8 years ago. She is a very popular Evangelist in Akure and her church is known as the prayer warriors’ church. Very gentle and highly reserved Prophetess Naomi runs the church with her 50 years old mother, Prophetess Oluyemi, who is an Indigene of Ikenne-Remo.  Her father is from Akure, while her father’s marriage to his wife has lasted over 30 years. Their marriage is also blessed with 6 children, 3 boys and 3 girls, while Oloori Naomi is the 3rd child.

Prophetess Naomi is known for a very famous crusade and praise programme entitled: Hosanna Night every December to mark the anniversary of the church. Many Akure Christians look forward to the programmes not just because of how she ministers, but because it is always star-studded with A-list Nigerian Gospel artistes performing.  Last October, Prophetess Naomi brought Tungba Gospel Musician, Yinka Aiyefele, Yetunde Are, Kenny Kore, and Biyi Samuel to perform at the crusade tag: “Hark the Herald Angels” at The Dome, Akure, Ondo State.

She is a graduate of Akungba Akoko University. The very eloquent and highly respectful Young Oloori doesn’t keep friends. Her crowd is small and her mum is her best friend. She is always in the company of her Mother, whom she addresses as “Wooli Agba” or Wura Mi”. They are always sighted at Malls together in Akure. Our source said the Prophetess hardly went out alone and she loves wearing flowing gown too.

Do you know how kabiyesi met his Oloori? City People’s investigation reveals that Kabiyesi met his beautiful Oloori through her mother many years ago. It was further revealed that it was an extended relationship with all siblings of Oloori Naomi Ogunwusi. Even the Prophetess was at the palace in Ile-Ife 3 months ago to pray for Kabiyesi and that was when Kabiyesi fell in love with her calmness and cool disposition.

It was further explained that Kabiyesi didn’t only fall in love at first sight; he was impressed and induced when he knew that Prophetess Naomi was a virgin at the time. This was why kabiyesi asked her out and promised her marriage without further ado. City People’s investigation reveals that it took Oloori and Kabiyesi 3-and-half month to pick a date for the marriage and preparations kicked off immediately.

The first thing Oonirisa did was to keep the date away from many as preparations went on among top family members. All the engagement stuffs were also sourced by Kabiyesi’s siblings who were also warned not to discuss it with outsiders.

As early as noon on that Thursday all was set for the royal journey to the residence of the Oluyemi in Akure. Of course, Kabiyesi didn’t go with them as tradition doesn’t permit him. He has to be at home awaiting his bride. He can also not prostrate for anyone and tradition demands he prostrates for his in-laws.

Who were those on the Royal Journey to Akure you may ask? They include Kabiyesi’s father, Prince Aderopo Ogunwusi and his wife, Mrs Margret Ogunwusi, Sooko Ekun, Prince Bimbo, who is Kabiyesi’s elder brother. His elder brother, Prince Tunji Ogunwusi, and his wife Ibilola Ogunwusi, who flew in from London. Also on the entourage were: Prince Jide Fadairo and his wife, Princess Folasade Ogunwusi, Princess Adesola, Princess Folusho and her husband Kolawole, and Princess Adebimpe and her husband, Prince Mobolaji Jimoh.  The Princesses were all clad in  luxury white lace matched with Royal blue headgear. Their traditional Iyun beads were from Tjcollections, while the Ogunwusi Princes and their brothers-in-law spotted white flowing Agbada.

Also in attendance was Obalufe, the Emeses, Osoro, and Ooni of Ife inner caucus Chiefs who all together were 40 in number. All drove to Akure in  style in 15 vehicles, which were mainly Benz series. They were led by escort as their hosts welcomed them at 5.31pm.

The Oluwaseyis, who were fully set awaiting their new in-laws quickly commenced the event at a few minutes to 6pm with opening prayer by the bride’s family.  Princess Adebimpe Ogunwusi Jimoh, who is the immediate younger sister of Oonirisa, introduced the Ogunwusi’s family to the Oluwaseyis, while the bride’s family also introduced their family members.

The angelic bride walking tall like a Queen that she is came in looking regal in an embellished fully-stoned aso-oke with a light make-up from Akure make-up Pro. Oluyemi Oluposi of dashingbride makeover while her royal Iyun hung beautifully on her neck as she welcomed her new family.

The Ogunwusis couldn’t take their eyes off their beautiful bride as the bride’s family admired the Luxury Lois-Volton set of luggage which was filled with luxury attired for the new Queen. Because the new Queen doesn’t wear earrings, Kabiyesi also sourced for best collection of wristwatches for her. The big yam tubers  were 89 pieces, Palm oil, rice, atare, honey, and others items were also put on display as Yoruba culture and tradition dictates

The Oluwaseyis didn’t keep them waiting for long as Prophetess Naomi was handed over to Oonirisa’s elder brother, the Sooko Ekun of Ile-Ife, Prince Bimbo Ogunwusi, who then handed her over to the Ogunwusi sisters.

Few minutes past 10pm, the Ooni entourage drove into Ile-Ife, where Oloori Ogunwusi was received at the entrance by Oonirisa’s Chiefs. Prayers were led by one of the Oonirisa’s Chiefs called ‘Loowa’ (Next to kabiyesi among Chiefs) while Obalufe also prayed for the new bride before she was presented to Ekerin Iyalode, who is a top member of Oonirisa Ruling house “Geesi ruling house. That was after a white Ram was killed, while the Oloori did the needful according to tradition of Ife. The Ekerin Iyalode poured water on her legss as the calabash was broken. Then the breaking  of kolanut followed.

She was later ushered into the palace where Oonirisa had already “Gunwa” on his throne. Kabiyesi, Oba Adeyeye Ogunwusi received her with open arms and prayed for her. He exchanged wedding bands with her and told her to sit at the right side. The emeses who are the closest chiefs to Kabiyesi then welcomed her officially with all the Oloori of the source praises, while she was then told to move to the left side of Kabiyesi, which makes her the new Oonirisa Oloori.

City People’s source who doesn’t want his name mentioned revealed that the Oonirisa’s sisters love the new Oloori and are already so fond of her because of her humility and down to earth nature. Investigation reveals that Ooni of Ife has not only got a mansion ready inside the palace for his new Oloori, he has also got 2018 Rav 4 GLS450 Benz series and another luxury salon car for Oloori as her official cars.

How The Ooni Of Ife Found Love Again was last modified: October 23rd, 2018 by Reporter