How We Fell In Love 4 Yrs Ago & Got Married – Movie Stars, OKIKI AFOLAYAN & BIMBO OGUNNOWO 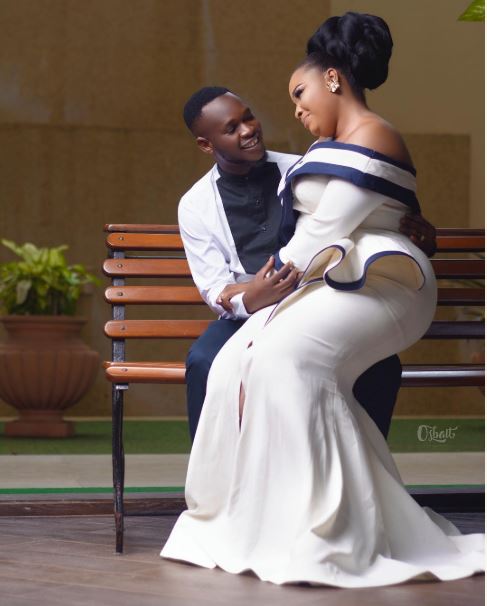 Popular Yoruba Movie Director, Okiki Afolayan, is in a happy mood right now. So is sexy actress and movie producer, Bimbo Ogunnowo. Both just got married on Saturday, 6th Oct in Lagos having dated for 4 years. They first met 11 years ago.

Their wedding was grand and impressive. Their Nikkah & Engagement ceremony took place at Time Square Events Centre, Ikeja in Lagos last Saturday. Earlier on in the week, they went to Ikoyi Registry, on Thursday, to put a seal on their relationship.

Last week, both spoke with City People Publisher, Seye Kehinde, about how they met 11years ago and started dating 4 years ago.  Below are excerpts of the interview.

Let me start by asking you to share with us your love story with Okiki Afolayan. How did you two click?

Let me start by telling you about me. I am Abimbola Ogunnowo to become  Abimbola Ogunnowo –Afolayan. The love story started about 11 years ago, at a location in Lagos. It was my 1st production; I was shooting my 1st movie, entitled: Ife Jafunmi. He was the Continuity Manager on the set. When I got to the location, at Classic Hotel in Ijebu-Ode, everybody was saying I should go meet him. He was the writer of the story. Everybody was like have I seen Okiki? Have you I seen Okiki? I was like, why is everyone asking me that kind of question now. I am a movie producer. Do I have to see a continuity person? They were actually concerned about my hair because I was carrying very long braids and they already knew that he was going to complain because I can’t use the braids to do a whole movie. So, they say why didn’t you see him first before we start shooting any scene if he was going to tell me to wrap the hair or do something about it.

Immediately he saw me he said haa!. Which kind hair is this? We can’t use this kind of hair for this movie ooo. It’s not possible”. I felt bad. It took me a day-and-half to redo the hair. He said we should begin to loosen the hair. That was how we met him. The Relationship and Friendship Game was in and out thing. All these years, we’ve been friends. We’ve been friends all these years. We dated for a while. After 3 years, we started dating. After a while, we broke up again because he had to pursue his career. He had so many things to do. I had to do my own too because I love business. Aside acting, I also do business. I am a business person. So, we had to go our different ways. Officially, we started dating 4 years ago. So far, so good, it’s been smooth, sweet, nice.

What are the striking things you saw in him that made you decide to marry him?

He is a very focused person. He is a focused guy. He is extremely intelligent. He has so much value, sacrificial. He can do anything for anybody.

Who toasted who first? Did he toast you first or you did?

People have been asking me that question. Who proposed first? Let me say it wasn’t a proposal like you asked. It was a discussion. He was ready. I was ready. He has been ready for a long time ago, over a year ago, I wasn’t really ready. I was afraid of commitment because I already had one that didn’t work out.  So, two weeks before we started planning the whole thing, we were just talking and he said Bimbo, are you not ready? Bimbo se o ti se tan ni?

I said Ok, let me think about it and I got home and my mum said,  Okiki called me What are you doing? Are you still thinking about it? Try it now and see it,  and that was it.

Tell us about where you were born. And where you grew up?

I was born in Egbeda in Lagos. My growing was in Egbeda. I am still living there right now. I did my Diploma in Trade Union and Industrial Relations in Ibadan. After my diploma course, I went to LASU to do Theatre Arts. After that, I went into acting  fully and that was it

How did you decide that acting was for you?

When I was doing Trade Unionism course in U.I, the only place you will see me is the  Theatre ground because it’s not far from my faculty. I will see people dancing without shoes and I liked it. One time like that, they wanted to do a developmental programme and they invited Mr Latin, Akin Olaiya and everybody. When I got there, I couldn’t leave. I loved it and so, I missed my test. I can’t forget that day. Naturally, I really love acting. I just like interpreting roles that are not my natural self. I like dancing, even though I don’t know how to really dance. Then, I met Mr Latin and he said why don’t you come and be acting?  He said go into acting. There is Akin in Ibadan, you can always meet him. I had to find my way through the production thing and I perfected my skills. I didn’t join any caucus, but I started as a Producer. It was on that movie set I met Mercy Aigbe. After the whole movie, I became so close to Mercy Aigbe. I am sure I am her 1st favourite in the industry.

How did you develop your love for acting?

I studied Theatre Arts. From there, I got introduced to how to act, how to behave on Theatre ground.

How did you develop your love for movie production?

I love listening to stories. I listen to different people. I hear stories. I watch movies, that are not even Nigerian stories. I have produced about 11. My favourite movie is one movie I did last year. My husband directed. It’s called Ajoje. I have been acting for over 11 years. Ajoje is one storyline that is great. I really love the story. The story is unique. My character in the story is so different from the normal Bimbo, with the everyday makeup. I had to interprete within roles. It has to switch from one role to another. It was really interesting. I did it last year I really love it.

How do you feel getting married to Bimbo Ogunnowo?

I feel on top of the world. I feel cool. I am so pleased. I am the best man now.

Why did you decide to marry Bimbo? What were the things you saw in her? How did you propose?

How do you feel getting married to someone, who is also an actress in the industry?

It’s nice. She’s used to the job. So, there won’t be arguments over where have you been? Where are you? What are you doing? I am very, very happy.

Let’s talk about your growing up years. Where were you born? And schools attended.

I was born in Mushin in Mushin local government. I went to primary school at Sogunle, Ladipo, Oshodi Local Government Primary School. Later, I went to Anwarudeen Islam Model College, Agege and I didn’t go further.

How did you start movies?

I started as a dancer, and I used to dance about in Oshodi local government area. After that, I went into continuity proper, continuity management and I did that for 11years. I was a Continuity Manager for 11yeasr. I worked for different directors, different producers. I have worked for almost 90% of the directors you have in the industry. Later, everybody was just saying Okiki, but you can direct, why don’t you direct? They said you can start directing. You have been doing continuity for a long time and you are very, very strong and intelligent I said ok, let me listen to them and I started with my film, Rado.

It was marketed by Okiki films. He helped me. That was about 5 years ago.

How many movies have you directed?

I have directed so many movies. I can’t even count again.

How difficult will or easy is it, for you to direct movies?

It is not that difficult. I just thank God for my style. I am a scriptwriter also. I normally write scripts. I love good stories. And I know good stories. I am not perfect. But I am trying I do my homework very well before I direct any movie given to me.

For how many years have you been in the industry?

Have there been times you felt like quitting movie and going to do something else?

No. No. No. Haaa! I have never in my life thought of quitting the industry. It gives me joy. It brings happiness. That’s my life. That’s my dream. When I am like this, I am a shy person, but when I am on set I am a different person, strict. No playing. That’s another world entirely for me.

When you were young, did you think you will end up acting in the movie industry?

No. Not at all. I started as a meat seller. I use to sing this popular Saidi Osupa’s song, about selling meat till the end of my life.

Nobody knows tomorrow, but all I know was selling meat. My plan was to grow big in it.

I didn’t even know I was going to be among the entertainer then. I thought I was going to sell beef throughout my life I have been planning to grow big, killing up to 5,000 cows,  by the time I clock 40, I will own my own meat place a slab where I can kill cows, like my boss then. I didn’t know the plan God has for me. Thank God, I am today not as a Meat Seller, but as a Movie Director.

How many movies have you produced and directed?

The 1st one was Rado, followed by Aina Baseje, then Ayawani, Mr Kola, Titobi Olorun. That’s 5. Titobi Olorun is the latest one. It is out. It is big. It is the best among the rest. That is the one I love most. It’s just different, far, far different. Everybody in the industry has commended it.

Many producers and script waters have commended the concept. Even Femi Adebayo who plays in it commended me.

When people hear your surname, Afolayan people think you are related to the Adelove family?

We are not, but we are from the same state. We are 2 different Afolayans. I am from Kwara, they are also from Kwara.

READ ALSO: BEING AN ACTRESS IS MY CALLING – FAST RISING ACTRESS, OMOWUNMI DADA

How We Fell In Love 4 Yrs Ago & Got Married – Movie Stars, OKIKI AFOLAYAN & BIMBO OGUNNOWO was last modified: October 8th, 2018 by Seye Kehinde