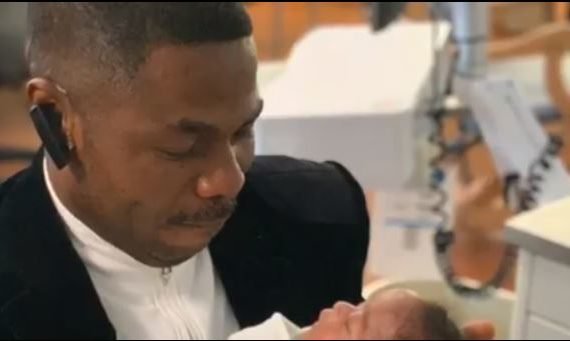 •The Story Of Their Wedding

It is no longer news that the Tungba gospel maestro, Evangelist Yinka Ayefele and his wife, Mrs. Temitope Ayefele have welcomed a set of triplets; two boys and a girl. Mrs. Ayefele delivered the babies safely in far away United States of America (USA) last week. The mother and new babies, we learnt, are doing fine and may return to Nigeria soon.

It is also public knowledge that Ayefele and wife have severally been rumoured to have given birth in the past. In fact, just last month, June, there was news flying round the the social media that Ayefele is blessed with triplets. The story was later to be debunked by the dandy singer. But this time around Ayefele has become a father and it has been confirmed. Ayefele himself broke the news on a weekly program he co-hosts on his radio, Fresh F.M and since then it has been celebration galore for O.J.A (Olayinka Joel Ayefele) as he is popularly called among his staff. Fans, as well as wishers have been storming his ‘Music House’ office on a daily basis, to share in his joy.

What many people may not know however is that, Ayefele’s wife has just given birth for the first time 22 years after their wedding. The couple met in 1996 and got married sometime in 1997, even after accident that has confined Ayefele to the wheelchair permanently, 6 months into the relationship. But surprisingly, their marriage has not only survived a stormy 22 years, it has been an inspiration to many other young couples who are waiting on the Lord for the fruit of wonb.

For those who may not know, Ayefele and his wife have always been close friends and each other’s confidant. Ayefele’s staff are his friends and same goes for his wife as well. They share a strong bond with those around them and never allow any third party to come in between them. They both love children and are always helping others. Just like her husband, Tope Ayefele has touched several lives as well. Through her foundation, Temitope Titilope Ayefele Foundation (TTAF), she has lift many who are in one need or the other.

Aside this, Yinka Ayefele and his wife were always determined to stay together from the onset. Despite the enormous pressure from both sides, they have remained committed to their home. When asked how they have been coping in the marriage in an interview with this magazine last year, Mrs. Ayefele speaks on the secret that has been keeping their marriage going.

“It is not easy at all my brother, but we thank God for His grace that has been sufficient for us in life and our marriage. Enough patience, mutual respect and understanding are part of  the key ingredients to a successful marriage. “You must not listen to side talks but concentrate on the person you are dealing with.

Since you have both signed a life contract and it is for better for worse, you must deal with issues together”. All that, coupled with the special grace of God, have sustained my marriage up till this moment. I understand the nature of my husband’s work, people are always around him and all that.” “I met him in 1996, before he had the accident. I saw in him a hard-working man when we met. Very hard-working, there is nothing he can’t do to stay afloat in his profession. He is someone who doesn’t get distracted from his dream no matter what may come his way.”

On why she has stayed put in the marriage despite the challenges, especially the husband’s accident and all, she said, “why won’t I stay? I told you about some of the qualities I saw in my husband that made me fall in love and marry him. I had made up my mind to spend the rest of my life with him before the accident. When he had the accident we there together at the University College Hospital, Ibadan (UCH).

I saw in him the determination to survive, to live and to make it in life. Those are the things that also motivated me to stay with him in the time of trouble and up till now. Nobody is above trial and tribulations and when they come what one should do is to remain steadfast and be prayerful. Bible didn’t tell us that trouble would not come, it is bound to come but God has given us a strong assurance, He Is there to give us the grace to overcome.”

Why I Have Remained In Active Journalism 43 Yrs After – LONDON Based Publisher, KAYODE SOYINKA