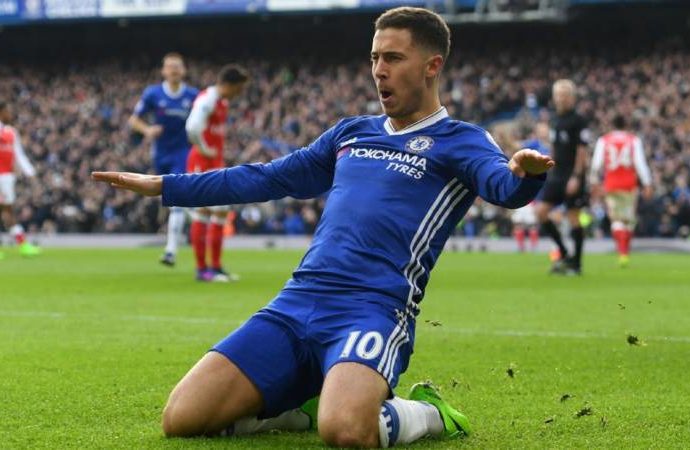 Eden Hazard says he would have “no problem” with staying at Chelsea for the remainder of his career.

The 27-year-forward has been at Chelsea since 2012 and has made a huge impact at Stamford Bridge, helping the club to several trophies, including a pair of Premier League titles.

Speculation has intensified surrounding a possible Real Madrid bid for Hazard, and the player himself has admitted that he might be interested in such a move.

However, having made a superb start to the season under new Chelsea boss Maurizio Sarri, Hazard told Sky Sports that he could remain with the Blues until he retires.

“I can finish with Chelsea,” the Premier League’s top scorer told Renault Match Zone, which will be shown on Sky Sports Premier League at 5pm on Friday.

“No problem at all. I am very happy with this club, with the team, my family is happy here.

“So If I don’t go to Spain, it is not a problem. I love the fans – I think the fans love me! What happens in the future, I will be happy, so that’s it.”

Hazard helped Belgium to the semi-finals of the World Cup in the summer and has scored seven Premier League goals this season, for a Chelsea side who remain unbeaten in all competitions.

“I Can End My Career At Chelsea”- Eden Hazard was last modified: October 19th, 2018 by Igbokwe John