I Feel Bad When People Call Me Asewo To Re Mecca 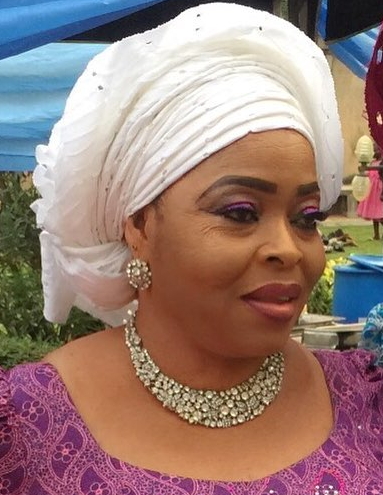 Toyin Adegbola is the popular actresses in the Yoruba movie sector. She has been acting past 35 years and she has featured in so many great movies. She has also produced about 15 movies of her own.

She was one of the movie matriarchs celebrated at the just held City People Movie Awards. At 57, this pretty Ilesha born actress who has kept her low cut for years does not look her age. She looks like a little girl. And she actually acts like one. be deceived. She is highly disciplined.

She is a mother of 3lovely kids, all of who live abroad. She is a widow who decided years back whenher husband died never to remarry again. So, she has remained single. Few weeksback, City People Publisher, SEYE KEHINDE had lunch with her at her Ibadanresidence, and over lunch she spoke about her life and successful career as atheatre practitioner. Below are excerpts of the interview.

For over 3 decades,people have been hearing the name Toyin Adegbola and the name is still makingwaves. What has kept you going?

I have focus. Whatever I lay my hands upon I always try my best professionally, I have been acting for 35 years now, but I have been acting all my life. I have been in actor since my childhood, because I always enjoy acting. When we were growing up, in primary and secondary school I acted, even in church. I happened to be the leader of our Theatre group then. When I was in school I represented my school severally.

I started professionally 35 years ago when I joined the them Television service of Oyo State in 1982.

Lets get to know whereyou were born and where you grew up?

I always say I was born, bred and buttered in Offa in Kwara State. I went to primary school there. That’s Wesley Primary School at Owode, Otta in Kwara State, which is a Methodist School. I also attended Erinle Secondary School, also in Kwara. We left for Osogbo. In Osogbo, when I couldn’t get admission to secondary school.

I went to Modern School. I attended CAC Modern School in Osogbo. After my Modern 3, I now went back to St Augustine and Inisa, not far from Ikirun, in Osun State.

So all my life has been between Kwara, Osun and Oyo. I have never lived in Lagos.

I thank God that I learnt a lot when I was living with the she is late as well. From there I got admission to Technical College, Osogbo. Where I studied Electronic.

From there, I was given an appointment at the than Television Service at Oyo State in Ibadan here. We were still in the Old Oyo State then. When I was at the Technical College, I sat for my City & Guild of England which I passed and my Trade Test which I passed as well. It was when I started working at the then Television Service of Oyo State and the BCOS that I chose to deviate into another course which I did at Ibadan Poly here. I did my ND in Business Admin.

How did you startedacting? What led you into it? What got you attracted?

Naturally, I have passion for acting, although I would have loved to be a nurse because my mum had a friend who happened to be a nurse then. She was very pretty. I always like the way she dress. As fate will have it, I was not given the opportunity to study Nursing. I made the attempt twice. I passed and during the interview I will not be given admission. So I stuck to acting.

When I now enjoyed the TS of Oyo State, there was this dance drama that we normally produced and acted in. It was during one of the recordings that Uncle Tubosun Odunsi (Padi Makailu) discovered me. He said, oh, you are a good actor, can I feature you in my optical movie? I said you know I an Civil Servant. Let me just discuss with my management. I went to my GM then, Alagba Adebisi Adesola, to ask him. He was the one that now called the Admin. He spoke to Alagba Kayode Ajibade, the then Director of Administration, to work it out and it was worked out perfectly in such a way that would not jeopadise my job then. He said whatever account I am been paid I will need to give like 50% to our organization.

Let me tell you about my role model. My role model is late Uncle Yemi Afolayan later on when he left, Oga Bello now stepped in as my mentor, my adviser and Oga.

How has it been since you went into acting?

I thank God. When I went into acting fully my late husband was still alive then. We got married in 1985 December and I was at the location of Kanakana at Aiyepe Ijebu. That is 1983. My 1st optical movie  then was Ejo Ngboro by Oja Padi Mukailu.

After that, we now went for Kanakana. My late husband and I were courting then. We were dating then. So, he was worried then that he couldn’t get me. He now asked for the location. He came all the way from Ibadan to Ijebu Aiyepe, just to look after me. He supported me very well then.

It was the movie Asewo To Re Mecca that brought me to limelight. When did the movie someone asked him. Why he let me play that role of Asewo. He said he has not even seen it. He now went to buy one to watch. He brought it home. He said what is bad in this movie? Why are people complaining? I can’t see the problem I knew she was an actress before I married her. She has been acting before we met. We met at BCOS. He was at the Radio Staion, I was at the Television Section. So, he knew I was an actress.

What years was themovie Asewo To Re Mecca?

It was in the early 90s. I left the Oyo State Television in 1992. I joined them in 1982 a a Pioneer member. Initially I thought my husband can’t allow me to act any longer. Acting was very unpopular then. People use to criticize those who allow their children, wives to act then in movies. But he did not stop me. He always encouraged me. When he now became late  I sat down with my little kids (I have 3, a boy and 2 girls) we now decided that the best thing is for me to continue with my job. That I should not ever think of getting married any longer. We all decided on that. They were still young then, but I just told them I want to face then and my job. Because If I choose to remarry then, I might not be able to give them attention and what they need. Because anybody I marry then will also need my attention. I thank God. God helped me to train then.

When everybody you Asewo To Re Mecca how did you feel?

I felt so bad, to be honest with you. There was a particular day I was going along Dugbe with my husband. He was driving a Bettle Volkswagen, He parked and I wanted to come down to buy something and I heard the people calling me Asewo, Asewo, Asewo. I felt so ashamed, I ran back to the car. Everybody started looking at me. I felt bad. We did several movies to change the name.

We did Toyin Tomato. We did Omoge To Re America, Mayowa so many but people decided not to change the name.

So, it like it has been destined that this is what is going to bring me to limelight.

What has made you stay this long in acting. People say there is no money in it but Toyin Adegbola has continued acting.

It’s the passion and love for the job. What ever that you are doing that enables you eat your 3 square meals, you are able to send your children to school, you are able to live a comfortable life to an extent, I think it is better to stick to it, than going for another job that you are going to meet there or what and what is going to happen to you.

I thank God. I need to be honest with you God loves me so much. It is not easy to be a simple parents, a single mother and to be able to train children abroad.

None of my children schooled here. I thank God. I might not be rich but I am not poor. I am comfortable up to my level and standard. I eat what I want to eat. I eat what I like. I don’t eat red meat. And I don’t go clubbing. I don’t drink alcohol. I thank God. I have trained a lot of people. I have so many young people living with me that I am sending to school.

I love to see people around me. I have so many children. So many daughters who are not my biological children. A lot of them are in the hostel. I love children because I love my parents at a very tender age.

And I told my God that if God loves me so much and he allows me to be comfortable a little bit I will also impact on some peoples lives, which I have tried to do. I have a lot of young people that I sponsor, that I mentor, that I sent to school, some are married.

I Feel Bad When People Call Me Asewo To Re Mecca was last modified: January 6th, 2019 by Reporter

US BASED GOSPEL SINGER, ANU OLUWAPO @ 40

How Senator KASHAMU Plans To Be Next OGUN Governor