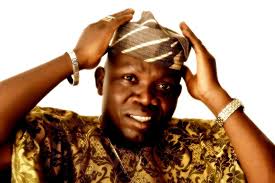 He was to have a show on November 12 in Isara Remo. Those who my daddy was to play for now came and said they wanted to take back their money. We now said they should not worry that we would come and perform at the event.

That is how I became a singer.

How come you didn’t try to sing when your dad was still alive?
We were doing it together. We were in it together. I used to write down songs for him. My dad was a composer. Going by Yoruba culture, I am considered too young to talk about Dad.

I am too young to narrate my fathers story. The truth of the matter is that my daddy did not have the benefit of Western education. He didn’t go to school. So whenever he comes up with a song, I will write it down for him. So that he won’t forget.

He can then call on me anytime to remind him about the song he asked me to write down for him yesterday or 3 days ago. I will now dictate the song to him for him to cram it in his head until he can know it off hand.

But these days, for todays musicians once you can have a school cert. you can cram easily but in my fathers generation many of them did not go to school. So it was more tedious for them.

I HAVE BEEN SINGING FOR THE PAST 37 YEARS – MUSILIU HARUNA ISHOLA was last modified: March 3rd, 2020 by Reporter