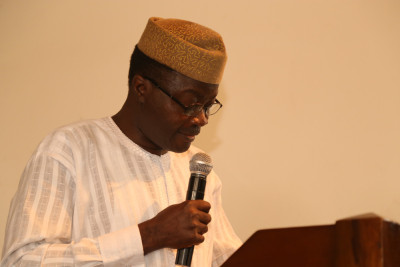 On Monday, 2nd May 2018, Kunle Ajibade turned 60. And on Wednesday 30th May, there was a colloquium organised in his honour by friends at the NIIA in Victoria Island, Lagos. Later that evening there was also a Cultural Evening held at Freedom Park, in Lagos. It was all in celebration of An Omoluabi @ 60.  The turn out was impressive.

Kunle Ajibade is a renowned journalist, literary guru and author who has dominated the media landscape for the past 3 decades. He is an Executive Editor of The News. He attended University of Ife (now Obafemi Awolowo University) where he earned a BA in English and an M.A. in Literature-in-English.

Before he became a co-Founder/Publisher of The News & PM News, he had worked in Grant Advertising as a Copy Writer, in African Concord as a Senior Correspondent and in the African Guardian as an Assistant Editor.

In 1995, Kunle Ajibade was arrested on spurious charges and jailed for life by the vicious Sani Abacha, regime, after a Kangaroo and contrived judicial process. His experience of arrest, imprisonment in the gulag of military dictatorship and subsequent release after 3 harrowing years all went a long way in shaping Kunle Ajibade.

How does Kunle Ajibade feel at 60?

How did he balance out excelling in Journalism and his literary commitments over the yeas? What are the highpoints and lowpoints of his career? What are his regret if any?  These and many more were the probing questions that ran through my mind as I drove to his office in Lagos last week Monday to interview the man who many of the news staff refer to as Prof. This is because of Kunle Ajibade’s love for books and the printed word.

For over an hour, City People Publisher SEYE KEHINDE engaged this accomplished creative mind. Trust Kunle Ajibade, he was at his best, reflecting on his life struggles which saw him crusading on the side of social justice.  Below are excepts of his interview.

Let me start by congratulating you on your turning 60. How does it make you feel?

One feels gratified. One is grateful that we are alive. We live in a country where it is so difficult to be alive. So easily, one feels good. One feels gratified that one is alive. I feel good that I am alive and I am very, very grateful to God for making it possible.

As you turned 60, what were the thoughts that went through your mind?

Strangely, I have been thinking of the friends that I have lost, both old and young. Its not the kind of thought that you prefer when you are celebrating. That has been the thoughts on my mind, friends who didn’t have to die when they died, who should be alive if they were to be living in a good country.

One of these people is Chief Bola Ige who will have made it to my birthday ceremony. I also remember Baganda Kartho (our Correspondent) in Kaduna who was murdered and assassinated. Those were the kind of thoughts I suffer from. At the same time one is also grateful that you see a kind of progress around you, friends who are doing very well and so you are thankful for all of that. I think that is the way of life. Ups and downs.  Progress and a bit of regression. That is what life is about. Life is a complex reality.

How have you been able to balance out your journalism career with your literary commitment over the years?

It’s a question of interest. If you put your mind to something it becomes your passion. And if you have a passion for something nothing can stop you from being committed to it.

Apart from that, the background is also important. I had the wonderful opportunity of studying Literature, History and Government at my A Level at the Oyo State College of Arts & Science   in Ile-Ife. Everybody felt I was going to study law, but I was far more interested in studying English and Literature.

So you could see where the passion started from. It started a long time ago.

Were their personalities that influenced you in that direction?

Prof. Wole Soyinka was at the University of Ife, to be honest with you, I went to Ife because of Professor Wole Soyinka. (Breaks out in laughter) It’s a crazy thing. I was not even thinking of what kind of job was I going to do with English instead of Law.

Here was this man, with a larger than life image. We had read his The Man Died in secondary school and he was all over the place. Prof. Ola Rotimi was also in Ife. Prof. Kole Omotosho was in Ife. Prof Yemi Ogunbiyi was in Ife. Professor Segun  Osoba was in Ife and a host of others. But Wole Soyinka particularly made me go in that direction. So, in my Part One our friendship started. I told him the truth. I have come to this University because of you.

There is no doubt about that. I keep saying that members of my generation, including Dapo Olorunyomi and the rest, are fortunate to have been taught by these people. This is because the influence has been really, really immense, with the kind of things God has allowed us to do with the knowledge that we gained from them.

If one looks at your profile you are academic in nature. You should have stayed back to teach. Your commitment to literary activities have been profound. So how did Journalism now come in?

When I finished my Masters, I came to Lagos and the 1st job I did in Lagos was Advertising. I was a copy writer with Grant Advertising.

At that time there were protest against SAP in Lagos. Given my political consciousness I was just struck in my office in Surulere in Grant Advertising.

The discussion and the debate in the office was what is wrong with this people rioting, these protesters, are they mad, you know. That was when the IBB people wanted to disgrace Tai Solarin. I was like mad. I said to myself, are you not supported to be one of those protesting? That’s not the clincher for me.

I started writing every Sunday for Eluem Emaka Ezeze. The Guardian On Sunday. I was doing Reviews every Sunday. I was enjoying every bit of it much more than the work that I was doing in Advertising. But far more significantly was the fact that some of my friends were free. They had the freedom to move around. They didn’t have a 9am to 5pm job. Dele Momodu was at the African Concord at that time.

Remember that Dele Momodu and I were post graduate students at the University of Ife. That was when we wrote the plagiarism article together. He had come to Lagos and got a job with the African concord. And this guy was doing well. He was all over the place moving from Ife to Port Harcourt, he was all over. I said to myself Oh My God. This is what I will like to do. Sam Omatseye, Babafemi Ojudu also had that kind of freedom and wanted it badly. I said to myself. You mean they will give you money to travel and you will have the pleasure to write and you will enjoy what you write? That was how I started journalism. I went to see the Editor-in-Chief of African Concord at that time, Mr. Levis Obi. He asked me, you mean you want to leave Advertising for Journalism? You don’t mean it.

Can’t you see that many of your friends are leaving Journalism for Advertising where there is more money? I said no I want to come. He asked me. So, how much are you earning in Advertising? I told him. He said we can’t pay that kind of money. I said, leave that alone sir, just give me the job. He now said you can resume on Monday and he said you should be prepared to go to Kaduna. I said Oh My God!

Alleluyah! This is wonderful. Fantastic. I have got it. That was how I started. And I haven’t looked back since then.

I Started Off As A Copy Writer @ Grants Advertising KUNLE AJIBADE Reflects On Life @ 60 was last modified: June 11th, 2018 by Seye Kehinde

I Have Been In Radio All My Adult Life – MAX FM GM, TOKUNBO OJEKUNLE