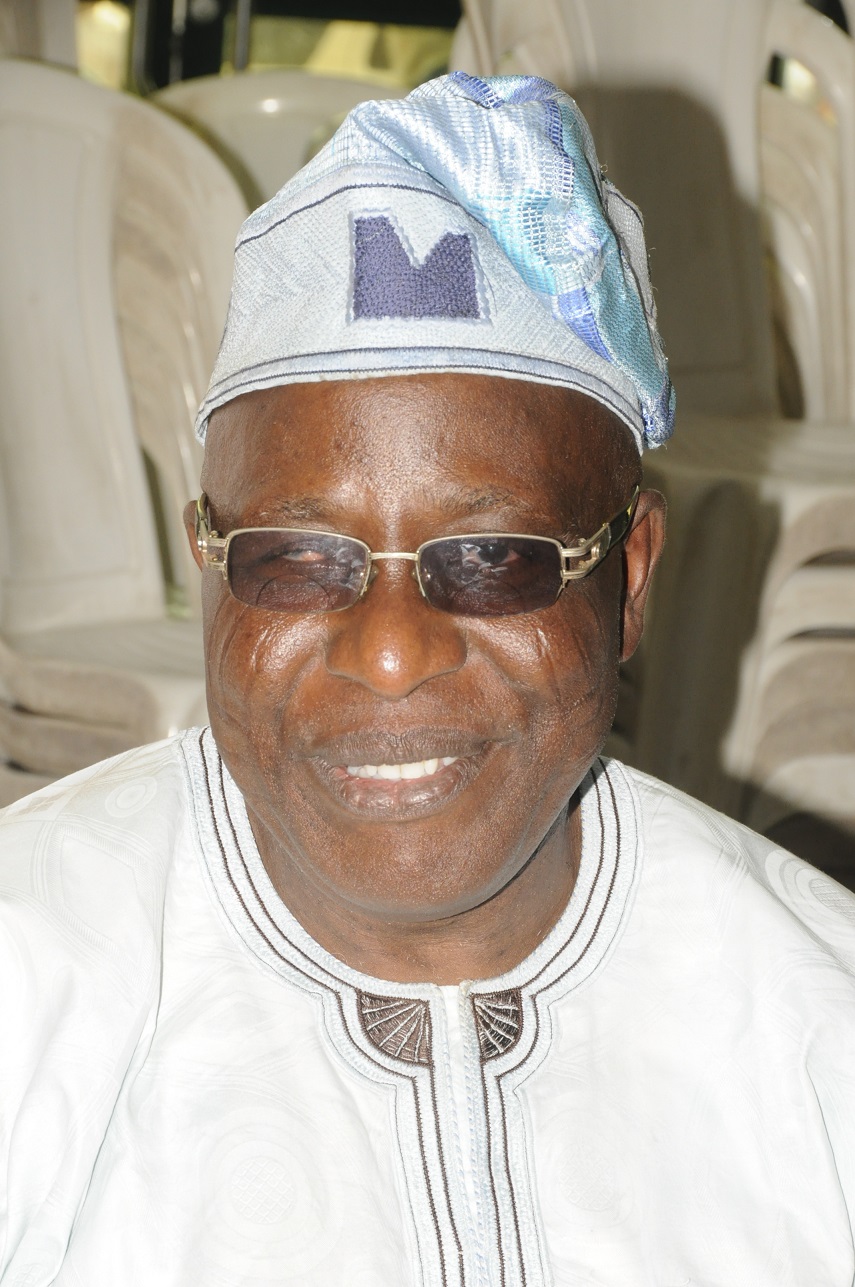 His real name is Samson Eluwole, but he is populalrly known as ‘Jinadu Ewele’ in the Yoruba industry. He is one of the veteran actors who have seen it all, starting from the days of Stage plays to Television series, celluloid and now home videos. He has been a major force in the great transformation the industry has witnessed  and has remained very relevant till today. He has played different characters in different movies and did well too. He is a complete talent, who can fit into any role. So talented is Jinadu Ewele that late Dr. Ishola Ogunsola (Isho Pepper) was captivated by his gifts and drafted him into the film industry after his freedom as a mechanic apprentice in the late 60s.

Since then ‘Jinadu Ewele’ has been able to prove his mettle in the industry. He has produced and acted in many films. In fact, he has lost count of the films he has been part of over the years. Last week, Baba Samson Eluwole was one of the outstanding acts honoured by City People Magazine in Ibadan. The Ibadan based actors and actress who are all members of TAMPAN were honooured for their immense contribution to the growth of the film industry. And it was in the course of the program that the duo of City People’s Correspondent, DARE ADENIRAN and Head of Graphics, SOLA BAMIDELE interviewed ‘Jinadu Ewelu’. He opened up on issues relating to how he came about his stage name and how he got into the film industry Below are excerpts of the interview.

Your stage name ‘JinaduEwele’ seems to have overshadowed your real name. How did you come about thename and how the theatre thing start with you?

You know we bear different names in our plays, most our films in the late 60s and early 70s, one of them is ‘’Iyawo Alalubosa’’ .It was so popular then. I was ‘Kasali Onikoko’ in the play. An example of such again was ‘Omolaja’. That was where I was called ‘Jinadu Ewele’. It was one of our successful stage plays in those days. So when the Television series came too, I was given different names too, lkike ‘Uncle Jimi’. We also did ‘Igiripa Omo Lawale’, a weekly television series between 1976 and 78. In ‘Efusetan’ I was also ‘Aare Latoosa’ too. But out all these names ‘Jinadu Ewele’ sticked.

You are one of the veterans in the Yoruba film industry in Nigeria and thing is how you have been able to excellently play different roles in movies right from those days till now and did the theatre thing start with you?

May the Lord bless of my late boss, Ishola Ogunsola (Isho Pepper), he discovered me in 1965 became friends in 1965/1966. He was my brother’s friend; he was lateOgungbe’s Group then. That my brother is Professor Tunde Awoyele, he just retired. The two friends so much look-alike that people mistake them for a twins on several . He used to come to our house to see that my brother and that was how we became friends too. We were later to be so close.

I was a mechanic apprentice around that time in fact; I had never thought I will be doing theatre. But he knew me and had seen the talent in me. He waited till I finished my mechanic apprenticeship in 1969. So he lured me into following him about against my initial plans to go to Kano and a mechanic workshop over there.

Because the news we used to get then was that my kind of work was thriving back in Kano, that the mechanics over there had no deep knowledge about the job. Back then if you tell people you want to go into theatre they see you as fellow. So I couldn’t tell my parents. We had to lie that he (Isho Pepper) had plans to establish me in my trade in Ibadan.

That was what I told my mum. She was so happy and gave me all the mechanic tools they had bought for me to start my own shop. It was in the theatre that I lost all the tools. Even though I was so young that time, I could drive any kind of car or lorry. The first lorry that our group bought in 1969, I drove it till it parked up.

LJ6991 was the plate number of the lorry, Huston Morris. Two of the Isho’swives, ‘Iya Efun’ and ‘Iya Alakara were the only ones that senior me in back then. Our drivers don’t stay long with us because most of them good drivers. So they used to help me packed my back with foams and order for me to see the front clearly, I was so young. I was driving till I lorry and at the same time repairing it; that was why I was so apprenticeship theatre practitioners back then. People like Ogunde, Oyin Adejobi,Ogunmola whenever we met their faulty lorry on the road back then, over there to help them fix it and they all loved me for that. So, most of them as Isho’s younger brother then.

There was a day we wanted to act this play called ‘Ayedeyeoyinbo’ in Ikere Ekiti; I was asked to act king’s messanger in the film but as soon as I changed into the custume, they all bursted into laughter. I didn’t know why. Until a day my senior, Boladale, who was the Manager of Isho Pepper’s group then, and our boss had issue and he said he wasn’t going to act. It was then that Isho called me to come and act that particular character. I was shocked because I never knew I could act, even more than Boladale. Isho was able to convince and encouraged me to go ahead because the show must go on in order for us not to be attacked by our fans who had been waiting patiently to our the group’s performance. At the end of the day I did it so well that Boladale’s absence was not felt. But left for me I was only enjoying myself. He later came back to take his position. That was how they fixed me in acting but as interesting as the whole thing were, my mind was in Kano where I wanted to go and establish my mechanic workshop. We continue with acting and whenever it is festive period I go to back to Ife, they always had issue when I was away because they would have missed my acting role or the fact that there will be nobody to repair the lorry. There was a time we also fought and I left for Ife to be driving one man, who was working as the Assistant Chairman of Ife-Ijesha Local Council. The man is the father of the present Commissioner in Lagos State, Kehinde Bamigbetan. But for the strong bond we shared, he (Isho pepper) later came for me and took me back to the group. In fact, he thereafter made me the Manager of the group against the normal process of going into an election. That was how close we were. That is why I sticked with Isho Pepper’s Group till his death and even after. So naturally before getting on stage, I knew I could act and that is what I have been doing all these years.

So how many years have you been acting now?

What would say has been your staying power in the theatre industry?

My father was not happy that I went into . In fact, he used to tell people that they should look at me, a child that went through apprenticeship for five years and started dancing about. He was always asking me whether we were into armed robbery or something in Ibadan; that I should please not tarnish the family name.

So, I made up my mind that I must make it in theatre business before his very eyes. That has been registered in my mind since then and that really pushed to work hard. Thank God before my father died, I became his favourite child. I don’t drink nor smoke. That is how I have structured my life. After nine years that I had left home, which I had famous but my father didn’t count it that I wrote him from Kano.

I explained in detail how he was not in support of what I do and all that. My determination to make it and I would become a child he look out for in the future. That was the year my father came to visit me in Ibadan. Our house didn’t have an address; we use to putBaba Faleti’s address as correspondence then. He went to NTA but we couldn’t see because I was on tour. After I returned from the tour I went to Ife and we now came to Ibadan together. Since then we became close and he blessed my work.

Which of the movies would you say brought you into the limelight?

They are too many. ‘Iyawo Alalubosa’ was so popular, ‘Kasali Onikoko’ was so popular too; that was in the days of play. After then we moved to weekly plays on television. Because when we started television plays, they don’t record. It was .

So, the popularity started with television, radio, Atoka. That is why our own popularity is unique. In the television back then, if our group (Dr. Ishola Ogunsola, Isho Pepper Group) was not first on the list then it must not be lower than second position.

What is your relationship with I sho Pepper’s family and children now?

We are still very close till tomorrow; they are my family.

How many films have youproduced on your own?

I did ‘Baba Onikoko’. When we started it was the leader of a group that takes all the glory of work even though when it was a conbined effort. Even all my expriences since I came into the industry. Let give you an example, there was this Yinka Qaudri’s film ‘Irunmulowo’, many thought it was my film. The story line was so simple; it was initially tittkled ‘Baba Ewe’. But when he explained to me what he wanted. I remembered a character that used to bring his car to our mechanic workshop when I was an apprentice. We had to abandon the former script and tittle and adopted the new idea. The film was a huge success but it was Yinka Qaudri’s film.

So if you are not an actor, what would you have been doing?

I would have become a successful businessman. It is the theatre thing that affected me somehow. But for the loves I have always had for the job, I thank God for everything. I am happy with what I am doing and I am enjoying it. I have been into auto business before, I have done supply and other things. The thought then was that we had gone out of our parents roof, we must not go back to complain and that the next thing was for us to succeed. Thank God for where we are today.

I Was A Mechanic When I SHO PEPPER Discovered Me In 1965 was last modified: November 22nd, 2018 by Dare Adeniran