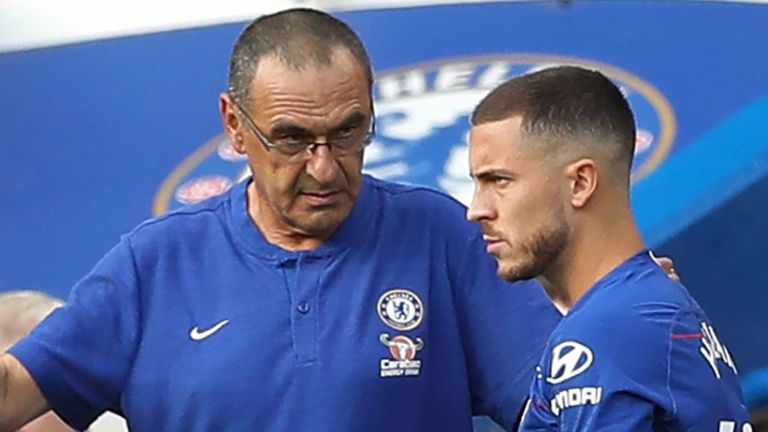 Reports on Monday suggested Real Madrid are eager to secure a £100m deal for the 28-year-old Belgium international.

Hazard later scored twice, including one of the goals of the Premier League season, in a 2-0 win over West Ham.

“Eden played a wonderful match. When he is able to play like this we are lucky because it is easy to win.

“£100m is too cheap in this market – we have seen in the last windows every price.

“The club agrees with me [about wanting to keep Hazard].

Hazard’s contract expires in summer 2020 and he was asked post-match about West Ham fans singing that he was moving to Real Madrid.

“They are wrong. For now, I am just focusing on Chelsea until the end of the season. We still have a lot to do and then we will see.”

Speaking to BBC Radio 5 Live, Sarri added: “I hope that it is not true. Every coach wants to keep a player like him.

“It’s a disaster when a player like Eden decides to change team. It’s very difficult to find another player at the same level because in the world there are only two or three players at the same level.

“We have to try something different [if he leaves], not find another Hazard. At this moment he is unique.”

‘I Will Be Very Difficult To Keep Hazard’ – Sarri was last modified: April 9th, 2019 by Damilare Salami