‘I will reconstruct your face’, Antony Joshua assures Jarrel Miller 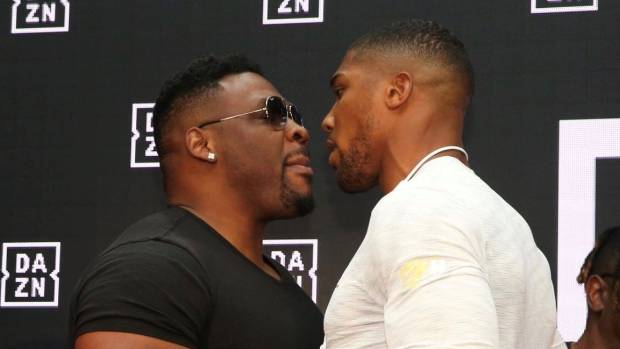 Anthony Joshua has vowed to “reconstruct” Jarrell ‘Big Baby’ Miller’s face as the war of words between the heavy weight rivals escalated. Anthony Joshua- Jarrell Miller Joshua and ‘Big Baby’ came together at a London press conference on Monday that concluded with a tense face-off, though none of the physicality that erupted in New York last week.

“The game-plan is to stop him in seven rounds,” Miller said about his challenge for Joshua’s IBF, WBA and WBO titles on June 1 at Madison Square Garden. Klitschko targets rematch with Anthony Joshua A menacing Joshua replied: “He talks about seven rounds? “Look at his face.

I will reconstruct his face and his body. “I’ve got 10 years left. This is all I know. I don’t know football, rugby, NFL, basketball. I know how to knock people out and beat them up.

“Every ounce of spirit he has, I will strip him of it. “I will do the job. I am a good boxer, a heavy-handed boxer. I have beaten better opponents than any heavyweight out there. “I will be the surgeon to give him a makeover.”