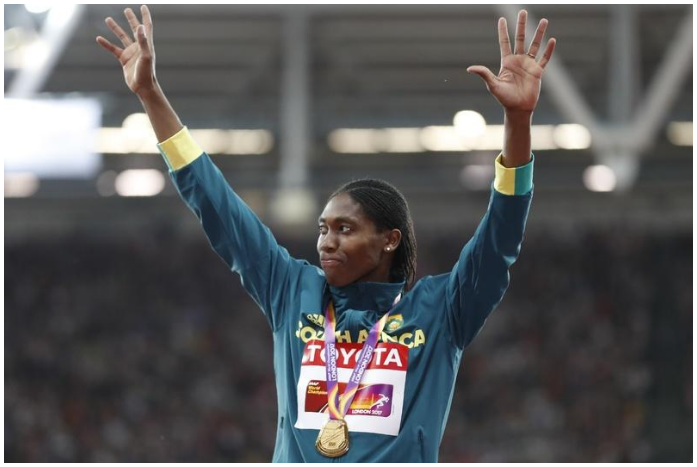 South Africa’s Caster Semenya claimed another global title when she won the world 800 metres gold on Sunday and after breaking through to record one minute 55.16 seconds she said she now has an eye on the world record.

Francine Niyonsaba of Burundi, who took silver behind her in Rio, was second again in 1:55.92 with American’s Ajee Wilson claiming bronze in 1:56.65.

Semenya, who won bronze in the unfamiliar 1,500m on Monday, looked much more at home in her preferred event.

Niyonsaba led the field round at a sharp pace, hitting the bell at 57.98 seconds, with Wilson, who set a U.S. record this year, hot on her heels.

Semenya, however, maintained her languid stride a few metres back before closing the gap, easing past both on the final bend and running clear.

Semenya, 26, is the 2016 Olympic and 2009 world champion and is poised to gain two more golds after Russian doper Mariya Savinova-Farnosova was stripped of her 2012 Olympic and 2011 world titles.

“I just love you guys, it feels like home in London,” said Semenya.

She was asked if she was thinking of an assault on the world record of 1:53.28 set by Czech Jarmila Kratochvilova in 1983 – the longest-standing track world record in the book.

“I have Olympic, world and Commonwealth titles now so maybe it is time to target the world record. It’s the next thing on the list. I know it will be difficult but I will have to attempt soon, maybe.”

While Kratochvilova’s mark was set when doping controls were virtually non-existent, Semenya’s own performances are continually questioned for other reasons.

Her victory will again raise the issue of hyperandrogenism and the perceived advantage of her raised natural levels of testosterone, though she said this week she was sick of talking about it.

http://af.reuters.com/article/sportsNews/idAFKCN1AU0J1-OZASPIAAF President Sebastian Coe said on Sunday that the governing body is in the process of making new submissions on the matter to the Court of Arbitration for Sport and that a date for a meeting was still being discussed.

Wilson said she had not expected a medal despite running into her best form at just the right time.

“I was trying to focus on my own race, I tried to speed it up for the last 100 metres not matter if I came up short,” she said.

“I pushed it 100 percent and I’m super-happy. The crowd was super-awesome and super-special tonight. It was electrifying.”