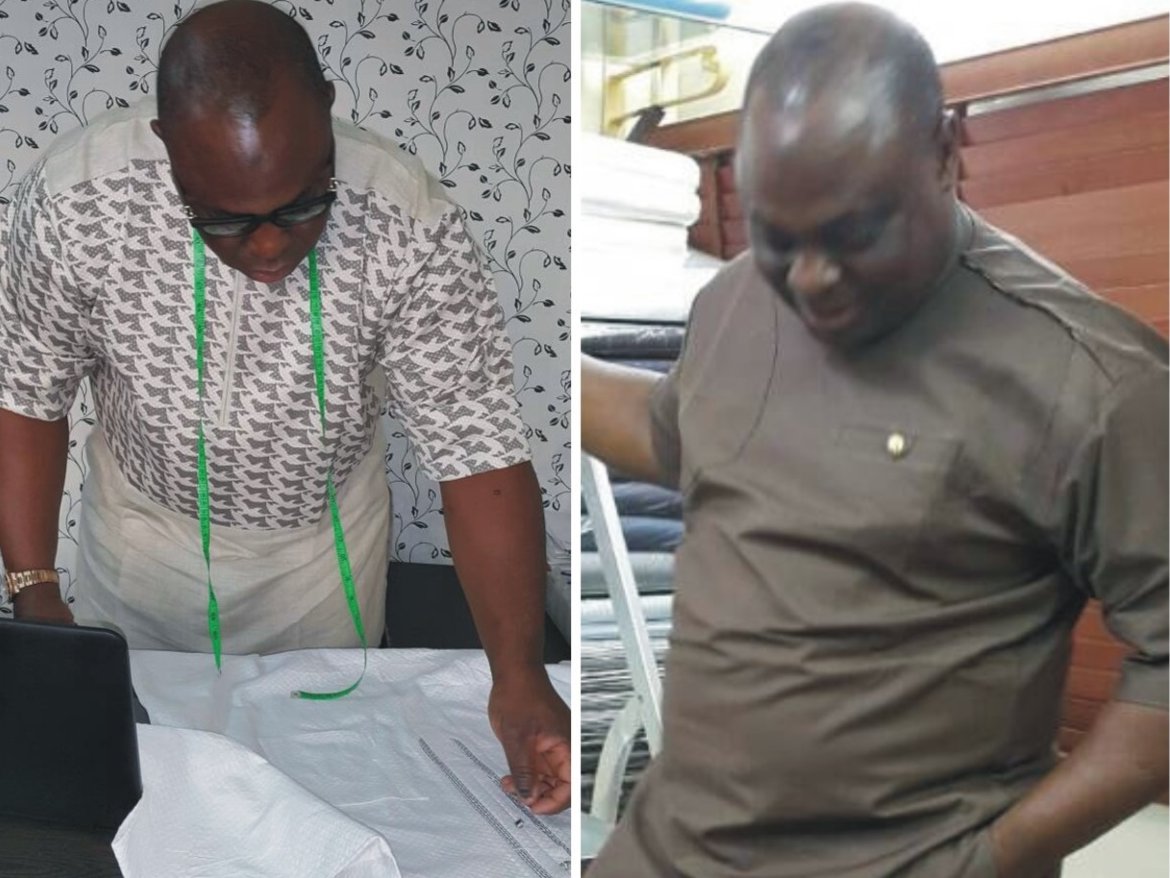 It’s 8 am on that Wednesday morning in Ibadan inside the BKK Couture workshop, along Felele Straight in the Challenge- area of the city. The sound of sewing machines rent the air. His tailors were busy on their machines, working on outfits assigned to them by their boss.  With them was the MD/CEO  himself, Alhaji Bashy Kuti, one of the most accomplished designers in the fashion industry. He was dressed in one of his Jalabia(s), with his tape-rule round his neck. Two young tailors were taking instructions from him on how to complete outfits they were working on. As he was working, he was also dishing out instructions to other workers. His Head Tailor was equally busy on another outfit. Everybody was busy. The workload looked heavy because of the need to supply various outlets all over the country especially the new one in London. He recently opened an outlet in London where he caters to his London clients.

To control and maintain standards, all designs are done at the Ibadan-based headquarters, from where they are taken abroad. Once Bashy finishes with an outfit he is working on, he moves to another tailor to inspect what he is doing. He is actively involved in the day-to-day operations of his fashion business. Many people don’t know that Bashy is hands-on. He is involved all through. He picks the appropriate buttons to use. And he pays attention to details. And when the job finishes, it is his responsibility to personally hand-deliver the clothes to his clients whenever they are. And he has a large clientele base made up of who-is-who in Nigeria, from Governors to Ministers. He designs for politicians. So also for celebrities. He caters to the taste of many people in the corridors of power and top CEOs of companies. He designs for a few high-net-worth individuals. And he does it so well that many of them can’t dream of going elsewhere. He gives them what is missing in other designers’ personal touch.

He does not only design well for his patrons, but the high quality and the uniqueness of his fabrics also stand him out. And he hand delivers their clothes to them: whether they are in Lagos, Abuja, Port Harcourt, Kaduna, Ilorin, Owerri or Enugu.

What else do you expect? Not many people know that this ebony-complexion and the ruggedly handsome guy has put over 20 years into fashion. Let’s quickly remind you that he started off years ago by simply playing with Fabrics.

“It all started with my love for Fabrics. I am a fabric person. I love fabrics,” he explained. “I have stayed on the job for a long time, long enough to know what the industry wants. I usually come up with different designs from time to time. Sometimes ago, I came up with the Sai Baba Style and everybody fell in love with it.

“We later introduced a handful of designs that people also love. We will keep working on new designs that have our trademark. I am proud to come up with designs that many people have copied. It shows that I am doing the right thing. So, for me, the job is to concentrate on my area of strength and make sure nobody beats me to my game.

“Though I am based in Ibadan, I deliver to every part of the country and I am abreast of happenings in Lagos and other parts of the country, I am more comfortable in Ibadan. The truth is that your patrons will locate you, no matter where you operate from, as long as they know you would give them the value for their money.

How has he been able to survive this long in business?

“Passion. And Focus. Those are the 2-key words. When you set up a business, you must always know why you are going into the business. For me, I didn’t just wake up and say the next thing to do is to be a fashion designer. I have always known much about fabrics because I was privileged to have learnt it from my late sister. She taught me many things about fabrics and I fell in love with it since then. I didn’t start the business in Ibadan, I actually started in Lagos, but I relocated to Ibadan in the ’90s because I wanted to have a fresh breath. I wanted to focus more on unique fabric designing, so I moved to Ibadan. Surviving has not been easy, but thank God, we are still standing tall. We have grown over the years and the city is now getting bigger as more people have continued to come into the city to establish their businesses as a result of government’s efforts to help small and large-scale businesses to grow. I owe my success in Ibadan to God and my very loyal clients, who have stood by me through thick and thin. We have survived for more than 15 years, but the truth is that we are still struggling to catch up with our colleagues outside Ibadan.

He is always seen at parties in and outside Ibadan, how does he manage to monitor his boys in the factory?

“Yes, I attend many parties, but it is to enhance my business because the people I sew for usually invite me to their parties and I can’t turn them down. It does not affect my business in any way. I am very much involved in what goes on at BKK. Nothing comes in or goes out without my consent. I have capable hands working for me, but that does not mean I don’t pay attention to my work. My input is very important at BKK”.

Since Bashy Kuti came to Ibadan decades ago, he had his eyes fixed on fashion designing and making a success out of it.  Despite his education, at an early age in Shagamu, he learnt ab-initio fashion rudiments from his dad, like embroidery that fits brocade or old school lace, and textile fabrics.

In his family, members are known for a textile business. His elder sibling, who was like his 2nd mum,  the late Alhaja Betty Oluwa, was one of the pioneer fashion textile dealers in Oyo State. She also ranked as one of the pioneer women in Nigeria to take the business to the international level. No doubt, she was one of the Ibadan’s richest women and her adopted son definitely worked with her. The textile industry is one place that one needs practical experience if one wants to excel. You knew the difference between Korea, China, Italian or Austria, or Swiss clothes in the same colour and design. How could you be a designer and not know about fabrics? He received tuition from his late second mom, for years.

It was after the course that he set up shop in their home at Felele in Ibadan and built his mini-factory in Lagos. At that point, he had role models like Vivid Imagination and Liatris, who had captured the Lagos and South-West and even Nigerian market. He understudied those men, their professional skills as market leaders and their personalities as well as the earlier iconic men over the years like Lanre Ogunlesi etc and realised that one had to be well packaged, well connected, classy and be a socialite and operate majorly among the rich, powerful and famous for one to be relevant. Then one had to have an outlet that would reflect the brand one was building. The brand has to be captivating and has to represent excellence.

Then, he changed the name from BKK to BKK Ultimo. He got corporate gift bags from the UK; got excellent tailors, a manager that is passionate about fashion designing and set up a world-class showroom, with Tea/Coffee Room, and fabric section all top of the range. He started from the top. He was inspired by the best in the industry and his outlet competes with any outlet in the shopping mall abroad. Guests are made to feel special. Another marketing strategy was that expensive clothes were highly discounted. No two designs look alike, no 2 fabrics look alike. Creativity, originality, exclusivity are the watchword and it is for those who could afford them. That’s the power brokers, absolute rich and famous. Earlier, Beshy Kuti had branded himself with his long- elongated cap and his clients trust him. He has character, he is very loyal and honest and trustworthy. Mostly, he is controversy-free and a bridge builder. He has excellent interpersonal skills and he respects people and their status. Call him the most popular big boy who cuts across, and you have it in Beshy Kuti.