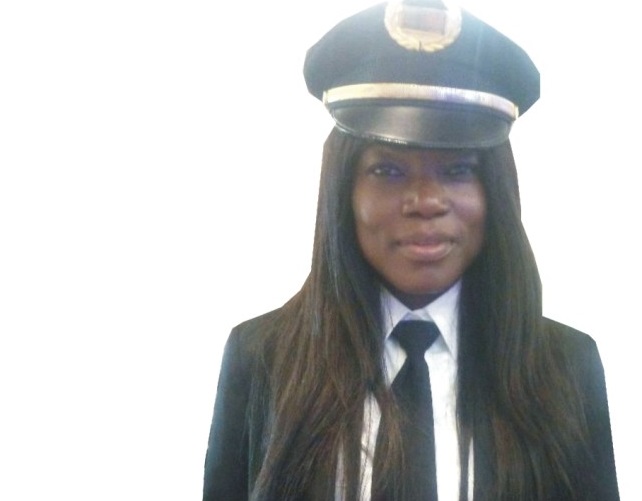 Banke is a trailblazer in her profession and for those who don’t know her, she is the only Nigerian female pilot flying an American plane in the US. She does this beautifully well in the midst of 4-6 white men because the sector is mainly male dominated. Against all odds, she has proved beyond reasonable doubts that she can thrive in a career which rarely gives room for women to show their mettle.

Adebanke’s career has been celebrated time and again in the media and her achievements have put her on a high pedestal such that she has become a golden fish on the aviation terrain in the United States. She is ATP AA certified airtime transport pilot, a multi-engine-rated commercial airline pilot. She has broad experience flying both continentally and internationally for over 6 years. She is type rated on the following aircraft, Boeing 747 800,Boeing 377 800, Mac Donald 83 and a bombardier CRJ 900. She currently flies a B747 800 in the United States for a US-based commercial cargo airline.

She is the first black female pilot in the world to fly one of the only 4 dream lifters in the world, the four engines heavy metal jets that were built by Boeing companies. She started her career by flying a B377 800 for one of the indigenous airline in Nigeria, Arik. It jump -started her career as a female pilot. She is also one of the few female pilots who have flown the MD 83 otherwise known as the Mad Dog, which is one of the powerful aircrafts in the world. This woman of many feats was one of the panelist at the just concluded handmaidens women in leadership series organised by Pastor Siji Iluyomade of RCCG, City of David and she shared her amazing story. She also opened up on her passion for flying to City People’s Society Editor, Tayo Fajorin Oyediji and how she rose to the top. In her profession, her leadership has been challenged being a woman in the midst of many men and she explained how she dealt with those challenges.

“Aviation like we all know is a male-dominated career and I am going to quickly give one or two statistics, in aviation. It is a male dominated with white people, 95 percent of the male pilots in the world are white men maybe 3percent of Asians then maybe 1.5percent of blacks and out of the those blacks are like 3percent of female and they are very few. Currently, I am flying in the USA, mostly  when I walk into the crew operation hall with my full regalia which indicates I am a pilot, they will still come to me for a paper work for cabin crew and I have a choice, I can either get upset or I can turn to that black angry woman, but I told myself, you won’t get that part of me. Everyday what I do is I will just say, not today, I can’t do the cabin crew work today, I will be your co. pilot, so every time they need my consent to get me out or frame me out.

They do it out of ignorance, I have seen people of the same colour as me and they challenge me when I want to go into the aircraft because of the security stuffs, they will be like, sorry, you are a flight attendant, you can’t go into the cockpit. So all those challenges are what I faced and I delt with. Talking about the male colleagues, sometimes we do some of this long flights, from America to like Japan,and I am with 4 or 6 white male, what they talk in the cockpit, the topics about their trump stars and all. How do I deal with that? One thing I always do is I use my knowledge and opportunity to say not all Africans are lazy. Not all Africans are beggars and we don’t live on trees that you all believe, so that is part of all the challenges I faced and sometimes they think I am from the Island, I always try to defend my country. I always represent Nigeria. So constantly, you just have to change all this negative impressions to positive impressions and they always think a lady is not capable, but I always make them know that I can do what they are doing and especially when we want to land a plane.

Landing a plane is a competition and by the time I land, which we call the greaser, they always respect me. I am very driven, I am a go getter. My passion for piloting is because I wanted to see the world, I wanted to go all over the world, to the glory of God, as I am talking to you right now, I have visited all the continents in the world. I have gone far and I am understanding people everyday. I am getting new experiences everyday, so for me, that is the reason I went piloting. I don’t want to see Ibadan where I came from or Nigeria alone, but the world.

I started my primary and secondary school education in Ibadan, then I went to Obafemi Awolowo University, I went for my master’s in university of Leicester and from there I went for piloting in United States. Right now, I am flying for one of the major airlines in the US. In addition to that, I am in the process of doing my PhD in America.

This is one job that gives me more than enough time. My contract right now is I fly for 2 weeks and go off for two weeks, there is no job in this world that will give you that time off, so it is vacationing for me; I work for 2 weeks and go off for two weeks. One thing is you have to be extremely focused, persevere. A lot of people will discourage you, there will be a lot of challenges, don’t look at them.

The career is male dominated, even we as black people, are not expected to become pilots, so in breaking that barrier, yes, but you have to block out the noise and push forward. I used my being a pilot in America as an opportunity to promote Nigeria, to correct all the wrong impressions they have about us. For me being a Nigeria among them is humbling and fulfilling. Height does not scare me, when we are in the planes, we don’t see any heights, we are in the clouds”. So my job brings me no fear”.

Adebanke grew up in Ibadan, Oyo State and obtained both primary and secondary education in Ibadan and later graduated with a Bachelor’s degree in Health Education from Obafemi Awolowo University, OAU, Ile-ife. She proceeded to the UK for a Master’s of Science degree programme in International Globalization at Leicester University. She has worked in the airline industry in 3 different continents and working in the USA as a Co-pilot with Delta Connect (a subsidiary of Delta Airlines).

Her first exposure to aviation was with Etihad Airways as an Aviation health trainer, while she was in the UK for her Master’s degree programme. They gave her the opportunity to travel around the world and in the course of her travels; she got to sit in the cockpit several times where she asked the pilots, tons and tons of questions out of a growing curiosity she couldn’t control.

One of the pilots who worked in the training department with her advised her to go and take an introductory flight course. She took the introductory flight course and her curiosity instantly morphed into passion. This was how she revealed her ups and downs in her piloting journey, “My journey as a female pilot is what I like to refer as “the good, the bad and the ugly” in reverse order. The bad and ugly parts were the early part of my experience as a female pilot. Fortunately, I have had more good parts to my career.

I started my pilot experience flying a B737-800 for one of our indigenous airlines, Arik Air at was a big jump-start in my career as a female pilot. The other good point of my career is the privilege to fly MD83 for Dana Airlines. Flying the MD83 gave me the confidence and reassurance I was looking for as a pilot because the MD83 aircrafts are referred to as “Mad Dog” planes. If you have flown the “mad dog”, you shouldn’t have issues flying any other aircraft.

The best part of my experience however is my exposure flying in the USA. Being based out of JFK airport in New York, which is one of the busiest airports in the world, has only expanded my horizon.

I have learned so much in such a short period of time. I believe that all these experiences, regardless of their classification, have shaped me, not just as a pilot but also as a woman. One day soon, by God’s grace, you will hear a flight attendant announce over the speaker – “Captain Banke Olayiwola”. My greatest goal is to be an impactful leader in the Nigerian aviation industry. There’s so much more we can do in this industry, not just for women but also for our great country”.

IBADAN Big Babe Hits It BIG As A Pilot In The US was last modified: July 18th, 2018 by Tayo Oyediji

Sade Adu is working on a new Album!

Hoodlums burn Kogi schools due for commissioning by Dino Melaye