Home News Idiagbons son narrates how his father dealt with him back in military school.
News 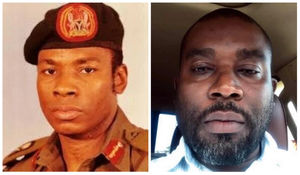 The first son of late Major Gen. Tunde Idiagbon (retd.), Adekunle recently revealed that while in military school, his father slapped him because he did not salute to greet him as a general in the army.

Late Idiagbon was the former Chief of Staff, Supreme Headquarters, under the military regime of Major Gen. Muhammadu Buhari between 1984 and 1985.

In an interview with The Punch, Adekunle spoke about his father would discipline any child who misbehaved, his relationship with the then Muhammadu Buhari and now President Buhari amongst others.

Narrating how his father disciplined any child who misbehaved, he said: “In 1982, I attended Military School, Zaria, and my father also schooled there. Then, the discipline in military school was top-notch. My father was back in Lagos then. He was a military secretary and a brigadier general in the army. But to me, he was just a daddy.

In three weeks, the place was like hell but I managed to stay. I remember one day we were being drilled and some soldiers called me to go to the commandant’s house that my father was there to see me.

My father was quite friendly with the then commandant. They were family friends and I thought I would use the opportunity to escape the drilling. I quickly left the place and went to the commandant’s house. When I got there, he was sitting outside with my father and they were reading papers. My father wore his uniform and I was excited to see him.

When he saw me, he stood up and I rushed to him. The normal thing I should have done was to salute him because I was in uniform and he was also in uniform. I was caught up in emotion and I just hugged him. He hugged me for a second too. But the next thing, he used his left hand to push me back a bit and as he did so, his right hand came on my face.

He gave me a hard slap and I saw stars. I wondered what I did wrong when I regained consciousness. The next thing he did was to look at the commandant and said, “Charles, is this the way you train your boys? A boy will see a general in the Nigerian Army and he will not salute.”

That was when the commandant called the people in charge of discipline and told them to lock me up. They removed my belt, cap and started punishing me right in his front and he didn’t worry. That was the day that I knew apart from being my father, he was also a general in the army.”

On his father’s relationship with the then Muhammadu Buhari and now President Buhari, he said:

“They were both military men with many people of that era – the likes of Gen. Sani Abacha, Gen. Ibrahim Babangida and many others. I think their friendship was very deep. When you go to war with someone and you watch their backs and they watch yours, your friendship becomes stronger and people may not understand the great bond of friendship.

When you encountered death and you came out alive, I think you will have a strong bond. So, his relationship with the then Gen. Buhari was cordial. They were quite close, even when they leftgoverment I think in a year, they saw each other three or four times. Either my daddy went to visit him or he came to see him.

Idiagbons son narrates how his father dealt with him back in military school. was last modified: May 21st, 2018 by Igbokwe John