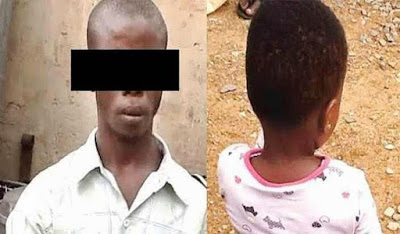 The suspect identified as one Ishaiku Joseph committed the crime last week near the Industrial Court opposite the University of Maiduguri.

According to Daily Trust, the father of the girls helped the parents of the suspect  with a room in his house which the suspect took advantage of and raped the girls who are of the same father but different mothers.

The suspect had raped the first minor several times when everyone in the house went out but he was caught red handed with the second minor.

The father of the girls who is a staff of UNIMAID and who reported the matter to the Police, said he wanted justice to prevail.

A policeman, who confirmed the incident said the suspect has confessed to the crime.