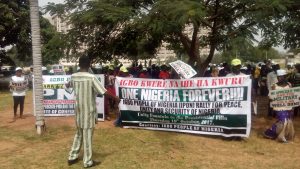 Supporters of the President Muhammadu Buhari administration who claimed to be from the south eastern part of the country, on Thursday, caused a temporary traffic obstruction in major streets of Abuja, when they engaged in peaceful protest in support of the President.
The renewed protest might be to counter the resumed sit-out by the Charles Oputa a.k.a Charly boy group against some policies and programmes of the government, particularly as it concerns the President’s alleged one-sided fight against corruption.
The protesters, mostly women, converged at the Unity Fountain, Abuja, as early as 8:00a.m, without propped knowledge of their gathering, until they were properly briefed by the Convener, Alhaji Muhammad Uche-Chegwo, and made to understood the essence of the gathering.
They were, thereafter, handed placards bearing different inscriptions that, perhaps, contained the messages of support and solidarity to the President. Band group also accompanied them with solidarity songs, as they marched through some streets in Abuja.
Leader of the group, however, told newsmen before take-off that the protest was to renew the support of the Igbo nation to the administration of President Muhammadu Buhari, contrary to the impression that Igbo nation were against the APC-led administration.
He said: “There was need to correct some false impression in some quarters that Buhari led federal government was against the people of the southeast, who are predominantly Igbo. That was untrue and total misconception. The President in official and unofficial engagements has displayed love and equity to all Nigerians irrespective of political, religious and ethnic differences.
“It unfair to accuse the President of favoring one part of Nigeria against another. Many have claimed that the Igbo are marginalized but that could also be interpreted differently by different people. Even the north that had ruled Nigeria more than other parts have claimed that the are being marginalised.”
He however encouraged all Igbo to rally support for the President so he could confidently confront the socio-economic, security and political challenges that had held Nigeria down for years.
Meanwhile, the Presidential spokesman, Femi Adesina, who received the pro-Buhari supporters, said the massive turnout was a pointer that all Nigerians are in support of the President and his developmental policies.
He assured them that their message would be properly communicated to the President, with assurance that he would act on them speedily.
Igbo Group Cause Temporary Traffic in Major Streets of Abuja, Rally for President Buhari was last modified: October 19th, 2017 by Arinze Ago