Igbos Cannot Fight Together, They are Not United – Nollywood Legend, Pete Edochie Talks on Biafra (Video) 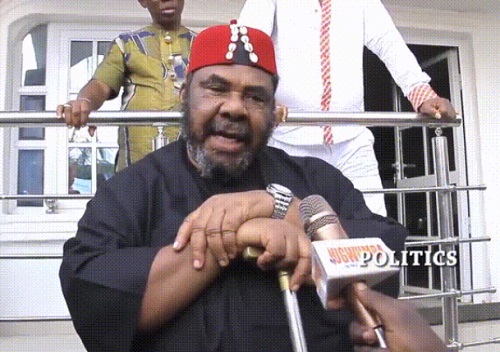 As the agitation for the creation of Biafra Republic continues to garner momentum, veteran Nollywood actor, Pete Edochie, has noted that Igbo people cannot fight any course together because they are not united.

While speaking with newsmen at an event that marks his 70th birthday, legendary Nollywood actor, Pete Edochie, disclosed that the Igbo people cannot fight any course together because they are not united.

The veteran movie star who spoke in Igbo language, said Igbos are scattered, with no particular goal, adding that it is not struggling for anything that will bring them together but their cultural values.

According to the 70-year-old thespian, most Igbos do not even speak their language again, while calling on Igbo leaders to seek ways to bring the people together.

“There are so many issues making me shed tears. One of them is that Igbo people are scattered. They are not in unity.

“If you take a close look at the Igbo, you will realize that they cannot fight together. Look, it’s not struggling for anything that will bring Igbo people together.

“Have you noticed that only Igbo people pray before eating kola nut? Why I’m saying this is because it is only the culture of the Igbo that can unite them.

“If you take a close look, you will also notice that in the whole of Nigeria, the Igbo people are the ones very mad about speaking English.

“But Igbo person will say ‘good morning sir’ instead of his local greeting. It is painful that the Igbo language is receding and no one is doing anything about it.”

Watch the video interview below;

Igbos Cannot Fight Together, They are Not United – Nollywood Legend, Pete Edochie Talks on Biafra (Video) was last modified: June 7th, 2017 by Arinze Ago

Meet the Woman Whose Buttocks Will Not...