It was an evening of beautiful football games with both sides really poised for victory, however, it was Manchester United boss, Jose Mourinho who landed the first Major English football trophy on Sunday evening.
United who started the highly tensed game on a good note soon found themselves struggling as Southampton came from two goals down to draw level soon after the second half resumed.
Jesse Lingard who looked like he has done nothing all game doubled United’s advantage after Ibrahimovic had given them the lead with a beautifully curled free kick in the 19th minute.

Mourinho who just put himself in the Manchester United hall of fame as the Red Devils first manager to win a major title in his first season expressed mixed feelings after the game.
“I’m a bit emotional yes. It’s not easy to win titles and so many times. It’s not easy to cope with the pressure I put myself under. 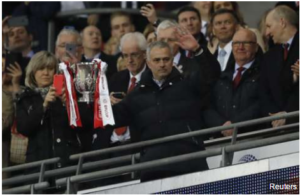 “It was a game I was feeling the difficulty. I want to pay homage to Southampton and what they deserve. We have the cup in our hands and probably should be in extra time.
“Winning is always special. The day I don’t get emotional when I win is the day to go home.
“Now we have one month in the Premier League and Rostov in the Europa League and Chelsea in the FA Cup and we have so much to play for.
“But today I could feel the difference between freshness in the teams – if we had gone to extra time we would have been in trouble.”

Manolo Gabbiadini who had given the Saints a lifeline at the tail end of the first half settled the scores in the 49th minute after holding off Chris Smalling, spinning and striking a finish low into the net.

Southampton boss Claude Puel didn’t feel negative about his side losing to United, although he felt his side deserved better
“Congratulations to Manchester United. They were too clinical. But we proved we can play very well with many chances and opportunities.
“We came back with quality. Perhaps we deserve better. It’s football and congratulations to Manchester and their players.
“Manolo Gabbiadini scored three good goals this afternoon (including the disallowed goal). There’s a lot of disappointment of course.
“We had a fantastic game without the reward. I hope we can continue on this level.” Puel told Sky sports. 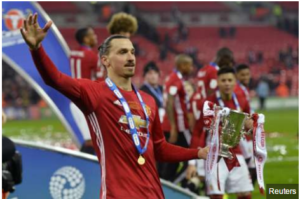 “This is a team effort. This is what I came for – to win and I am winning. The more I win the more satisfied I get.
“You appreciate it more the older you get. Wherever I have gone I have won. I think this is trophy number 32 for me.
“This is what I predicted. To many I could not do it. My friend, I keep doing it. I’m enjoying it in England.”

How I Have Been Able To Stay Fab At 60 •GENEVIEVE Publisher, BETTY IRABOR