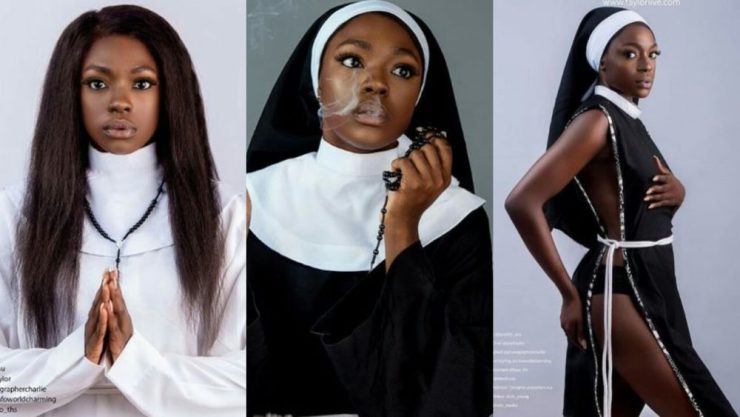 After facing criticism for her racy photoshoot in a nun-themed outfit, Beverly Osu, an actress/video vixen, is fighting back.

The pictures from the photoshoot for Taylor Live Magazine have earned Osu knocks on social media.

Osu appears semi-clad in one of the pictures, wears a see-through lace gown in another one while in the third image, she is blowing out smoke from a cigarette and clutching on to a rosary.

Reacting to the bashing of her photoshoot, the actress said she is Catholic and as such, she takes the faith seriously.

Osu also defended smoking in one of the pictures, saying, “reverend sisters and fathers smoke”.

She said the photoshoot was “a mere work of art,” describing the images as “harmless”.

“I am a born and practicing Catholic so I know and take (our) faith seriously,” she wrote on Instagram Live.

“People should rather worry and pray for the hundreds of thousands of innocent victims that are raped and abused by priests all over the world particularly over 1000 victims raped by over 300 priests in Pennsylvania than worry over a harmless picture that is a mere work of art.

“In any case, reverend sisters and fathers smoke in real life which has not been established as sin to my knowledge.

“Dear Nigerians, I don’t do what I do for your applause. If this images came out from a movie, will it be ok?

“It’s funny how you all just sinned because of a beautiful artistic picture. Lol. I laugh in Hebrew.”