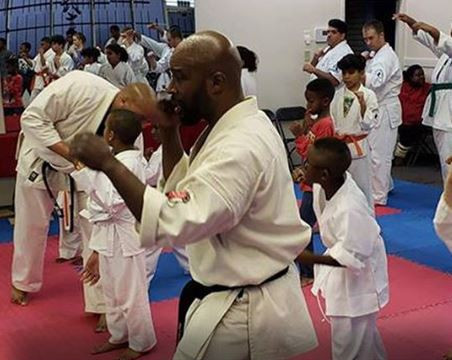 A man allegedly trying to kidnap a woman chased her into a karate dojo but it didn’t end well for him.

According to police reports, It all began when the suspect tried to force a woman into his car outside the dojo just before 9 p.m. The woman was able to escape and ran into the nearby studio in search of help.

Head instructor Randall Ephraim of the karate studio just happened to be in the studio cleaning up, along with a couple of adult students and some kids being picked up by their parents, so hortly after the woman entered, the suspect followed her in.

Ephraim told CNN that at first he thought the man was inquiring about a class, but the suspect said he was there for the woman, who insisted she did not know him and that he had tried to kidnap her. “He then tried to force himself further into the dojo, aggressively pushing and swinging. I then went into action defending myself and got him out of the dojo. Once outside he attempted to attack again and was dealt with accordingly.”

The suspect has since been identified as August Williams, 46, who was taken to the hospital with injuries. He has been charged with attempted kidnapping, assault and other offences related to the incident.

INCREDIBLE- Kidnapper gets the beating of his life after chasing a woman into a karate studio was last modified: January 9th, 2019 by Igbokwe John