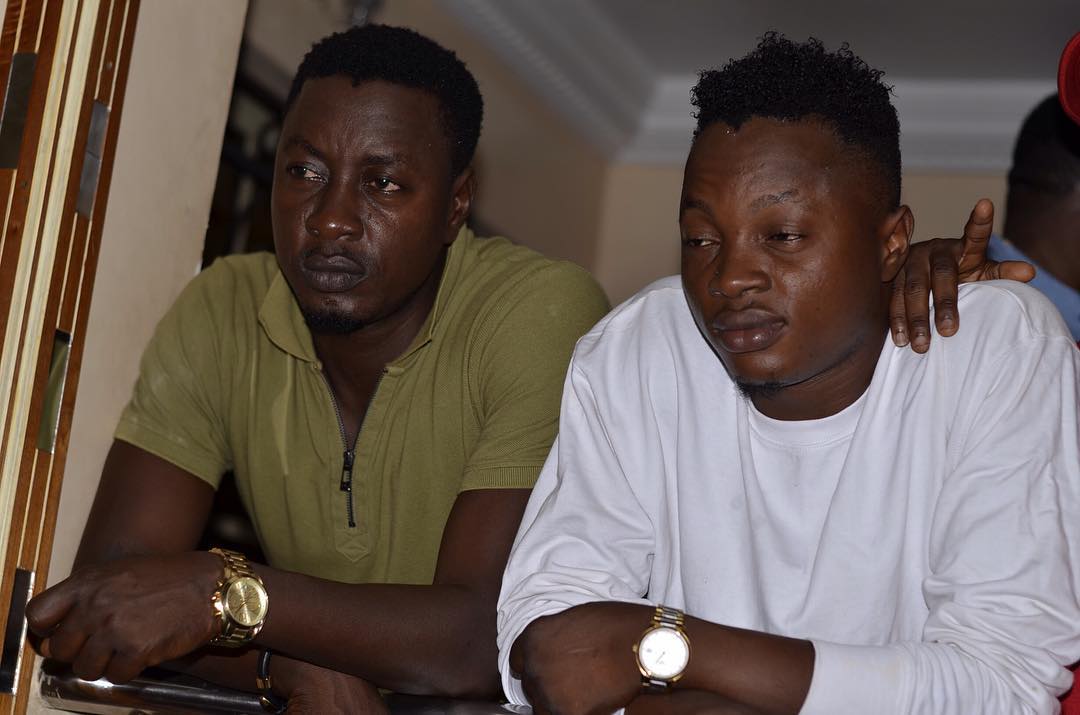 Yusuf Oladeni Adebisi, son of the Ibadan based popular Fuji star, Taye Akande Adebisi aka “Taye Currency”, has set a new record in Oyo politics. He is the youngest of the recently elected honourables in Oyo State, under PDP, and perhaps the youngest in the country. At 25, he is going to represent Ibadan South West state constituency 1in the state’s Assembly starting from May this year. Many never thought young Yusuf could have performed the way he did in the March 9 election. But surprisingly, he didn’t just win, he beat a sitting and indeed a two-term honourable in the race. While Yusuf has gotten all it takes to triumph as a honourable; he is History and International Relations graduate of Al-Hiqma University, Ilorin in Kwara State and also holds an MBA in Business Administration from Ladoke Akintola University of Technology (LAUTECH), Ogbomoso. Not many, however, know that his sojourn into politics was not that easy. According to him, he took a lot of persuasions for his father to agree for him to join politics. All these and many more formed part of the discussion as City People’s Correspondent, DARE ADENIRAN, recently engaged Yusuf in a chat. It was quite a revealing and explosive session him. Where the young honourable speaks about his victory at the poll, his plans for his constituency and many more. You won’t want to miss the excerpts from the interview. Enjoy it.

What first came to your mind when INEC announced you as the winner of Ibadan South-West state constituency 1?

I felt happy, very elated and I give thanks to the Almighty God for crowning our efforts;  my people’s effort, my father’s effort and my personal effort from the day one of the campaign till when the election result was announced. Also, I give commendation to all candidates irrespective of theie party affiliation, particularly my uncle, Hon. Kehinde Subair, he is a brother to my father and he has done so much for the constituency in about eight years as the representative of Ibadan South West Constituency 1 in the House and I pray that God will continue to be with him. He has done his part and I have taken the baton from him, in taking the constituency to the next level.

One would have expected you to take a career path as a young graduate, what would say prompted to going into politics?

Let me say that one of the factors that drive one into anything is interest then the environment. My decision was based on what happening in my immediate environment, I can say that really aroused my interest in politics. When you observe that things are not going the way they are supposed to and despite your curiosity, eagerness to right the wrong, you discover that you are unable to make any reasonable impact, and I don’t want my constituents to continue in poverty. I don’t want my people to continue in hardship, then what is the solution? The solution according to my findings is that you cannot sit outside and try to correct what is being done inside; it is when you are among those inside that you can make any meaningful impact. This is what brought me into politics.

Another thing is that as a youth I cannot afford to sit on the fence. Like what people used to say that youths of today are the leaders of tomorrow when is that tomorrow going to come if we fail to make it happen today? They have already set the ball rolling for we youths; the Not Too Young To Run Bill has been passed into law, and so, this gave people like me the opportunity to aspire for political office. Why do we need to waste our precious time again in taking the mantle of leadership of this country? I want to contribute my quota to the development of my constituency; I want to play a role in freeing my people, the people of my constituency, the youth, the aged ones, the women and younger children from indirect slavery and I want to ensure that peace reigns among my people.

Have I taken part in politics before? I will say yes. I was involved in politics when I was in school, in which I happened to be the President of my faculty, Faculty of Humanities at Al-Hiqma University in Kwara State. So, this gave me the basic knowledge of what politics look like at the larger world. Though it is a different ball game but at least I have little experience and understanding of how politics is being played outside the school, how to canvass people to your side and every other basic requirement of politics at a larger level.

What was your dad’s reaction when you told him about your intention of going into politics?

It wasn’t that easy, it took a lot of persuasions before I could convinced him. Because after my NBA program we discussed on what was the next thing for me and o told him to help me use his connections to get a job. But he didn’t know I had another plan anyway. It was after he told me he has gotten me a job that Informed him of my plans to go into politics, because I was scared to tell him initially. In fact, when I broke the new to him, he sent me out to go and think over it again. He told me how dirty politics could be, the financial implications and all. But unknown to him, I had started printing stickers already. At the end of the day he supported my vision with everything he has and this is where we are today.

Now that you have won the election to represent your people, what is your plan for them?

The reason I came into politics is to contribute my quota to the development of my constituency, play my part in improving the general well-being of my people and to add value to the general development of the state. What differentiates people is their level of education and as we all know that when there is education, there will be civilization and when there is civilization there will be peace and when there is peace there will be development. The first thing I want to do is to support educational development in my constituency, how? I will push for the establishment or siting of secondary schools within my constituency. As everything stands now, there is no public secondary school in my constituency, not even one in the whole constituency of a state, while we have over 70 both private and public in some constituencies. And this has been contributing to the high rate of crime within the constituency. The risk of life of children that have to go a long distance school is high, as well as economic hardship experienced by the parents, in terms of payment for transportation to and fro their various schools as well as feeding of these children. Another thing that I will push for is a public hospital. As I speak there is no public hospital in my constituency and the Primary Health Care centres we have around are not functioning properly. I will try my best to ensure that all the health centres within the constituency are well equipped with drugs and every other necessary equipment pending the time the issue of the public hospital is addressed.

Also, the issue of security, there is no police station, not even a police post within Ibadan South West constituency 1. If there is an issue that needs the attention of the police, we will have to go to another constituency before we can call the police and this why the area is being regarded as one of the volatile areas in Ibadan.

It is because the people living there have been neglected either by the government or the people that have been representing them; an adage says “an idle hand is the devil’s workshop”. Look, all these problems have been there over the years and nobody is ready to address or take it to the appropriate authority. I was born here, I had my primary school if not because there is no secondary, I wouldn’t have gone outside my constituency for my secondary education. If the issue of education is addressed the issue of security will be half solved. Aside this issues of education, health and security, my other agenda on how to improve the standard of living of the people in my constituency will subsequently be rolled out.

How would you describe roles played by your father and other stakeholders before, during and after the election?

Oh,  my dad, I will like to say a big thank you to him, a very big one and pray that the Almighty God continues to guide, guard and protect him. I also pray that God will continue to bless and provide for the rest of his life. You know why? He has been a very good father not only to me but to other younger ones. He was with me throughout the entire journey; he is been wonderful, though it wasn’t an easy decision but he supported me with everything he has, financially, morally, physically, mentally, spiritually just name it, he is always there for me. I sincerely appreciate my father, my leader, the governor-elect, Engineer Seyi Makinde and the party leaders for their efforts. I thank people of my constituency for their love and their belief in me and I promise not to let them down.

Tell us about yourself, where were born, your educational background and all that?

My name is Yusuf Oladeni Adebisi, I am the first son of the popular Ibadan based musician, Alhaji Taye Akande Adebisi aka Currency, Apesin 1. By the special grace of God, I am the newly elected honourable member to represent the good people of Ibadan South West state constituency 1 in the Oyo State House of Assembly at the recently held governorship and House of Assembly elections on the platform of Peoples Democratic Party, PDP.

I was born to the family of Alhaji and Mrs Taiwo Akande Adebisi Currency as I said earlier, the famous Ibadan based Fuji artiste 25 years ago at Aladorin Compound, Foko, in Ibadan. I started my education at Aladorin Nursery & Primary School, Ibadan for my basic education. From there I proceeded to Hallmark College, Odo-Ona, Apata also in Ibadan for my secondary education. After completing my secondary education, I got admitted to Bowen University, Iwo, Osun State for my tertiary education. I spent a session at Bowen University before transferring my admission to Al-Hiqma University in Ilorin, Kwara State to complete my first degree in History and International Relations. For my National Youth Service Corps (NYSC) programme, I was posted to Sokoto State and later redeployed to Kwara State, where I eventually served.

After my youth service, I went for my MBA programme in Business Administration at Ladoke Akintola University of Technology (LAUTECH) in Ogbomoso between 2016 and 2018.

READ ALSO: WHAT I WILL LIKE TO BE REMEMBERED FOR, 4 YRS AFTER – GOV AMBODE

What I Will Like To Be Remembered For, 4 Yrs After – Gov Ambode