Inside Popular EPE Catholic Church Where The Rich Worship 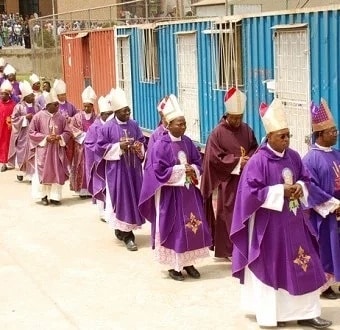 Epe is of the most popular towns in Lagos State. No wonder many core prominent and rich Lagos indigenes come from there, it is where the Lagos State Governor, Akinwunmi Ambode hails from. It is also the area where you find churches with the most beautiful architectural designs you can think of, especially Catholic Churches.

Immaculate Conception Catholic Church was built 115 years ago in 1903 and never looks its old age because it was built by renowned architects with solid and quality stones. The church is usually known for its high membership as it’s the biggest Catholic Church in that vicinity. It has played host to many functions, from weddings, funeral, birthdays to launchings and Harvest.It has some prominent members like the late Governor of Lagos and Femi Otedola’s father, Sir Micheal Otedola whom his burial 4 years ago shook the whole of Epe and the church wore a new look for the whole week. His children have also been a constant pillar in the church, contributing a whole lot to the development of the church.

Although, the dominant factor or centre of attraction to Epe is buoyancy of the economic activities and opportunities there, especially in fishery business but there are a number of people who still go to Epe just to worship and serve God. Example of these set of worshippers can be found in Immaculate Conception Catholic Church located at Ibowon area of Epe.

A great number of these people do not reside in Epe but still attend this church from wherever they reside in Lagos State because of their inexplicable affinity with this historical worship centre since ages past.

The church which always stress the fact that they worship God and honour Mary for being a vessel of honour as described by God has a formidable pastoral team. The church observe mass, fast, does charity and evangelism.

The church is very popular within the Epe axis and it also serves as a converging point for dignatries whenever they have a big event in Epe. It is one of the oldest churches in Epe but it has fully transformed into a well modernised church.