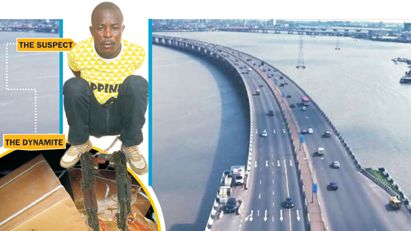 The police have arrested three other suspects in connection with a plan by a militant group to bomb the Third Mainland Bridge in Lagos State.

The marine police had also intensified water patrol around the bridge area to avert any attack from members of the gang, who were on the run.
It had been reported that a bomb expert of the group, Abiodun Amos, aka Senti, was apprehended by the Inspector-General of Police Intelligence Response Team in the Ikorodu area of Lagos.

He was said to have been apprehended during the last phase of the foiled plan with two Ak-47 rifles and a cache of explosives recovered from the boot of his car.
43-year-old Amos, an indigene of Arugbo in the Ese-Odo Local Government Area of Ondo State, reportedly confessed to the police to have participated in various robberies and kidnappings in Lagos and Ogun states after the bombardment of creeks around the states, which frustrated the gang’s pipeline vandalism operations.

He told the police that the group, led by one General Ossy, was aggrieved that the government did not yield to its amnesty request and demand for pipeline protection contract.
“General Ossy said if we didn’t blow up the Third Mainland Bridge, the government would not listen to us. We had concluded plans and we decided to carry out the attack by November ending. I am the group’s explosive expert.

We were about going into the creek to conclude plans on how to carry out the attack when I was arrested,” he had said.

A credible police source told Punch that after Amos’ arrest, three others had been apprehended in Lagos and Delta states.

The source, however, said the police withheld the identities of the suspects in order not to jeopardise investigations and the arrest of other fleeing members of the gang.