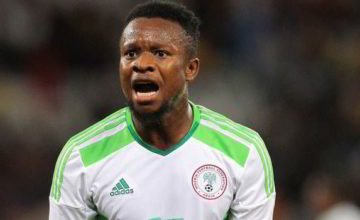 Midfielder Ogenyi Onazi has assured that the Super Eagles will be ready for action ahead of pre-World Cup friendly matches against the Democratic Republic of Congo, England and the Czech Republic.

Nigeria host the Leopards of the DR Congo in Port Harcourt on May 28, before a prestige clash with England’s Three Lions at Wembley Stadium in Londonon on June 2 and an encounter with the Czech Republic in Vienna on June 6.

“We are not focusing on any particular game; we are getting ready to face all the teams that we have to play before the World Cup. It is the right mentality to approach the games.

“I have been asked several questions about the match against England, but I tell people that the England match is very important, just like the other matches that we have to play. What is key for us is to get into the right psychological state to confront every opposition that lie ahead, including those that will be waiting at the FIFA World Cup,” Onazi told NFF from his base in Turkey.

Former FIFA U17 World Cup silver –winning midfielder Onazi, who played for Nigeria at the 2014 FIFA World Cup finals in Brazil, dismissed feelings that the team would be over-confident going into the FIFA World Cup following victories in friendlies against Argentina and Poland.

“There is nothing like over-confidence. What I can say is that we are a very ambitious team and we will always be ready to play any team. Yes, we defeated Argentina and Poland, but that has not in any way generated feelings of over-confidence in the camp. We are focused and have our heads on our shoulders.

“For us, humility and hard work will be the winning words going ahead. Our preparation is going on well and we are happy with that. At the World Cup, we will come up against different teams with different styles and approaches of play. It is important that we are adequately prepared and we appreciate the games that the NFF has lined up for us,” said the Trabzonspor of Turkey ace.

The Eagles clash with the Democratic Republic of Congo at the Adokiye Amiesimaka Stadium in Port Harcourt, before flying to London for the match against England at Wembley. Four days later, they will trade tackles with the Czech Republic at the Rudolf Tonn Stadium, just outside Vienna.

Int’l friendlies: Eagles will be ready -Onazi was last modified: May 11th, 2018 by Igbokwe John

Buhari Under Pressure To Reveal His Illness – CNN