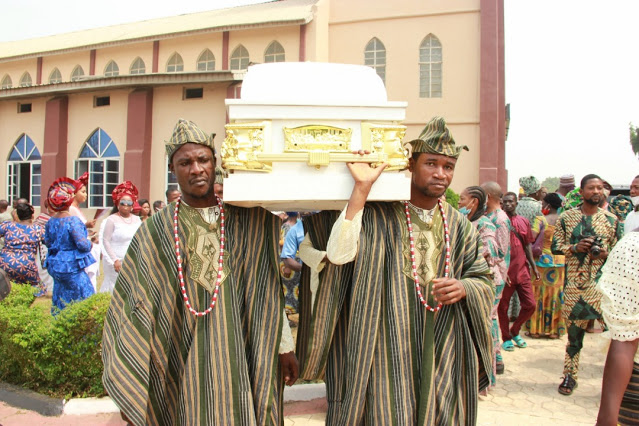 + How US Based Son, Oluwafemi Ajibola Stole Show From Overseas

The ancient town of Iperu-Remo in Ogun State came alive again on Friday, January 22, 2021, at the final burial rites held in honour of a popular Iperu-Remo socialite and mother of many celebrity children, late madam Comfort Olasumbo Adedoyin Odukoya popularly referred to as Naira. The crème-de-la-crème from all works of life were present to celebrate the mother of many outstanding and successful children both at home and abroad.

City People’s DAMILARE SALAMI (08155134152) and Senior Photojournalist, ABDULRASHEED SANNI were at the event and here they bring you the behind the scene gists and beautiful pictures for your eyes, enjoy.

At The Church Service

The St. James’ Anglican Church at Iperu-Remo which was established in 1964. It is one of the oldest Anglican churches in Nigeria and there, the final service was held in honour of the late Naira. Let us also quickly inform you that the St. James’ Anglican is the home church of Governor Dapo Abiodun. The church is located just a few buildings away from the Governor’s house in Iperu-Remo. And that is where the governor attends any time he is in town.

The choir was not a crowd, rather it was filled with people of skills and talents. They sang and played so skillfully that it felt like the reception party already.

The worshippers who gathered to celebrate Naira didn’t number up to one hundred in an auditorium that could comfortably accommodate about five hundred people or more. The reason was simple, it is part of the church and family of Naira’s effort to ensure that COVID-19 spread is reduced. Everyone wore their masks appropriately and a good number of people carried their alcohol-based hand sanitisers along with them. Even on the pulpit, different ministers in the church kept mentioning that COVID-19 is real and not just a disease for the rich and powerful alone.

The Undertakers Were Amazing Too

Did we tell you about the undertakers? They were astonishing with their traditional attire and dance steps. They danced and carried the casket with some well-organized choreography before finally laying Naira’s remains to rest at the cemetery.

Although the party was just about to start, Mama’s son, Otunba Wale Arobieke, a popular U.K based socialite and business mogul was required to appreciate all those at the church service before heading to the reception venue. He was full of gratitude to the church, ministers, family and friends and particularly his wardrobe manager, Yeye Folasade Arobieke, his beloved wife.

One of Mama’s son, Oluwafemi Ajibola who is based in the US was unavoidably absent at the event. However, his friends and family came around to represent him on the dancefloor. They came in their numbers to show him much love even in absentia.  In fact, they spread so well as RK1 sang in praises. Anyone would have thought that he was present at the event except if they were told. He is happily married and has a son, Tayo.

It is a known fact that Obas do not attend funerals in Yorubaland but they can equally be present by sending a representative when it is crucial. And that was the case at Naira’s funeral. Oba Adeleke Idowu Bosibo, the Alaperu of Iperu sent his staff of office to the church to mark his last respect for Naira. Mama is such an important personality in Iperu-Remo.

Hon Sola Arobieke is the Special Adviser to Gov Dapo Abiodun on commerce and industry and he was in attendance too. He was at the event from the beginning till the very end. He was equally very active in every sense of it.

Let’s quickly tell you about how top Nollywood star, Lola Ajibola stole the show at her step mum, Naira’s funeral. Firstly, her outfits were out of this world. Just like other children, Lola Ajibola stunned in beautifully styled white lace bubu gown and gele made from Aso-Oke. Her second outfit was the Ankara Aso-Ebi. But you needed to see how it was fully stoned and well-styled to fit this light-skinned screen goddess. Her face was fully glammed without stains even after sweating so much due to activities. Her clothes were designed by Kofoworola stitches.

The venue of the reception was St James’ Anglican Primary School playground not too far from the church. Of course, there were security officials at the entrance who ensured that everyone came in with a face mask to reduce the spread of COVID-19.

Mounting the stage to introduce himself was a popular compere, comedian and radio host, Tijani Adetunji popularly known as Teteregun. There was never a dull moment with him. He ensured that he carried the audience along without leaving anyone lost as the event progresses into the late evening.

Considering the caliber of people that attended Naira’s funeral, it was needful for the family and event planner to fully secure the venue to prevent the event from being hijacked by hoodlums and street urchins. Fully kitted private security officials, men of the Ogun State So Safe Corps and Officers of the Nigerian police force manned every angle, joint and open place at the venue.

He is very popular in the fuji music sector and sings very much like K1. His name is Alhaji Ramoni Akanni and he is popularly known as RK1. He was on the bandstand with his full band to entertain the guests. Expectedly, he did a wonderful job. He picked every single celebrity and sang their praises. That aside, all the guests showered accolades on him as he

Many Nollywood veterans and stars came to show love for one of their own, Lola Ajibola. They all slayed in different shades and styles of the Aso-Ebi Ankara. Trust our movie superstars when it comes to dressing, they are always at their best. This time around, their table became a mini pilgrimage as many of their fans would not let them be until they take selfies with them. Some of the Nollywood stars in attendance include Ayo Adesanya, Iya Ereko, Ronke Oshodi Oke, Fausat Balogun, Taiwo Hassan aka Ogogo, Alhaji Ayeyemi, Fope Ajibola, Yemi Amodu, Epsalum films boss. Borokinni of Yorubaland Kamorudeen Lamina was among Lola Ajibola’s VIP guests too.

One person whose entry cannot but be talked about was Taiwo Hassan popularly known as Ogogo. The entire area where came in from stood still as the veteran actor stepped in. Many who know Ogogo will tell you that he is such a humble person and he proved that as he went from table to table to greet all his fans before finally taking his seat beside Iya Ereko, another veteran actor.

It was time for Lola Ajibola’s dance and all her friends in the movie industry joined her on the dancefloor. The team was led by Ogogo himself who sprayed the screen diva some cash, turned to RK1 to bless him before returning to his seat. Ayo Adesanya, Ronke Oshodi Oke, Iya Ereko, Fausat Balogun and others also joined on the dancefloor.

One of Naira’s children that show at the event was Otunba Wale Arobieke and his wife, Yeye Folasade Arobieke. They were on the dancefloor on several occasions to felicitate with all their siblings.

READ ALSO: ALL LANDS IN NIGERIA BELONG TO THE FULANIS – MIYETTI ALLAH

Another Prominent Oba, Timi Of Ede, Muniru Lawal Welcomes A Set Of Twins