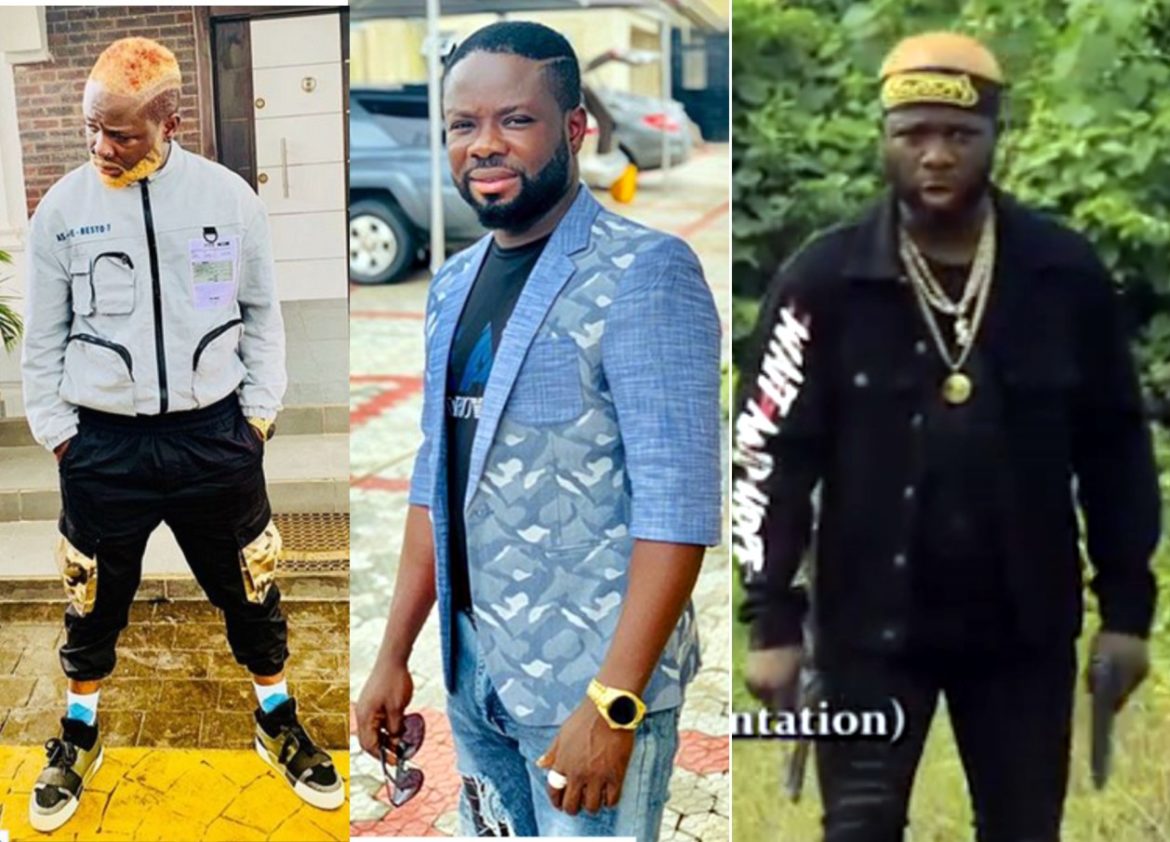 •Reveals How He Hit It BIG!

His movie is currently generating a lot of interest right now online. For the past few months, Itele’s movie called Kesari has been viewed by 1.8 million viewers, online and everybody is talking about it. So far, his movie has been the highest viewed Yoruba movie.

His movie has shot him to the limelight. Though everyone calls him Itele, his real name is Ibrahim Yekini. Itele is an award-winning actor, producer, scriptwriter and director who was born in Bariga Lagos but schooled in Kano.

He joined the movie industry in the year 2000 after his close friend persuaded him to give it a trial. He got his stage name from his first movies. ‘Itele”, but his role in his movie, “Eku Metta” shot him to the limelight.

Many don’t know Itele is a very shy, reserved and cool-headed guy. His roles in movies contradict his real self.  In this interview with City People’s BIODUN ALAO, he talked about his movie Kesari.

How did movie start for you?

It was my close friend who encouraged me to go into acting. As at then, we were living together. He kept telling me that I have the talent to act, so I joined the movie industry in the year 2000. I will say, he practically pushed me to go into acting. He was always like, I will make a good actor if I join acting, so I decided to give it a trial. And that was how the journey started for me.

Did you go through any form of training before joining the industry fully?

Yes. I did. I joined a group back then and the name of my Boss was Folorunsho Adejobi. People called him “Daddy Jay” we always go for practice at Agege back then. There was a living legend there, which is a veteran actress, Fali Werepe’s husband” As at when I joined the group, we were not really many in the group. So, we always went to Baba Oluropo to learn about everything that has to do with Theatre. That was how I started.

You are an actor, producer-director, and scriptwriter, how did you learn all that?

When I joined the movie industry, after learning everything about acting, I produced my first movie entitled. “Itele”.

Was that the movie that shot you to limelight?

No, it was actually my second movie titled: “Eku Metta” that shot me to limelight though I got my stage name from my first movie. When I shot my first movie, “Itele”, which was directed by the boss “ Don Richard”, a highly respected movie maker. I learnt a lot from him, concerning movie directing and production. I always hang around him and we often work together, so in the process, I learnt so much from him. He taught me how to direct movies, so that was how I learnt how to direct movies.

Do you write your scripts yourself?

What inspires your stories?

Hmmnn, I would say, it is a special gift from God Almighty. Secondly, Don Richard also helped me a lot. It is one thing to have a story. It is another thing to bring it to script. So Don Richard taught me how to direct, write and also to manage production.

Why are all your movies are criminal related?

Laugh! To me, am a versatile actor. That is one thing I know and I believe and I can give you two examples to what I just said. When I just joined the movie industry and wanted to produce my own movie. I use to watch stars like Emeka Ike, Ramsey Noah and a whole lots of them. What I noticed about them, is that, for you to have a breakthrough in the movie industry it is either you come out with a crime movie or love story. Take, for example, 12 to 13 years ago, the like of Emeka and Ramsey featured more in love stories, compared to now that they feature more in action movies. Back then I started with crime movies as well, so I learnt that anytime, I wanted to shoot a movie and I wanted it to be a Blockbuster, it should be a  Crime or Love story. Also, the movie that shot me to the limelight “Eku Metta” was crime and love related, so people started noticing me from there, but lots of producers in the industry believe I interpret the Crime roles more perfectly compared to any other roles. On my own. I have produced a lot of movies, I have tragedy stories, love stories like “Alagemo. Ori Olola” and others. Though I believe I can perfectly interpret any role but people prefer me to act the criminal roles.

If you watched my latest movie, “Kesan” I interpreted it so perfectly,  also I acted in  “Fadaka” by Yewande Adekoya, I acted the lead character and in that movie, you will see the soft side of me, not the usual criminal roles. I love to act and produce crime movies roles a lot because I watch lots of American movies the movie Block Pinspired me to write my movie   “Kesari”. I watch a lot of crime movies, I’m an addict of American crime movies. I also understand people’s love for crime movies in Nigeria. When they see the usual soft or love movies,  they don’t really get impressed with it, but they feel more comfortable with crime movies.

Do you go through extra training to interpret those roles because I know? It is not easy?

Mostly, those roles you see me interpret in movies, especially the criminal roles, I don’t go through any form of practice to interpret any role in movies. It is when I’m on the set of that movie that inspiration comes. Like I said earlier, I learnt Theatre before joining the industry, and how I learnt my acting is different and unique. I was trained with stage performance, so I understand what is acting, and movement, so I know how to use my lines and my body.

Above all, I will say It’s God unique gift in my life.

So what inspired the movie, Kesari?

It watched the American movie “Black Pattern” that inspired my movie “Kesari” especially, the action part of it. After watching it, I was like, let me try something that people will love. I understand lots of producers are trying but I just wanted to do something different and unique. Then the massive feedback from fans and people that inspired “The Return of Kessari”. Their comments gingered me to do more.

How do you succeed in an industry, where producers complain of not selling their movies, yet, you produce, back-to-back?

Well, to me, I believe when you believe in God, all things will be possible. You know this belief that the market is bad, the issue of pricy, they have all, been in existence for over 15 years now, but I have a contrary belief to all that, I don’t belief the industry and country is bad, so things can’t work out well for me. I believe I have to work harder to make things work out well for me, and I guess that that has been working out well for me. Though I’m praying every day for things to get better, but my work will not wait for the country to get better, for I start addressing something. I believe if you come with something different and unique, then people will appreciate you. As a producer, if you produce a standout movie, you will definitely make your money irrespective of what is happening in the country and in the industry. That is my take on that.

How do you cope with being a producer, actor, writer, director and a married man?

Seriously, being an actor and a movie director is not easy at all. And that is why, when I’m shooting big project like Kesari, I always call someone to assist me, to be an Assistant Director.

The first crime movie I produced in the industry was  “Anini”, that was like 6 to 7 years ago. I called Tope Adebayo to assist me, that also happened in Kesari and the Return of Kesari. And why I do that mostly, is because I understand, the job is not easy, acting, producing and directing in the same movie. But I thank God for always blessing me with the strength.

What is the difference between Itele people see on screen and Ibrahim Yekini in real life?

The Itele on screen, takes his job very serious, because, it is something he has a strong passion for. So. I take acting very serious, once I hear acting. Everything changes. But my normal life, I’m a very shy person, gentle and I don’t talk much, easy going and I keep to my self a lot.

What is your family and educational background?

I didn’t really go to school that much oh, laughs! I went to primary and Secondary School in the North. Kano State to be precise, but I also have plans on ground to further move.

I am from Abeokuta in Ogun State. I was born in Bariga Lagos but brought up in Kano State.

Let’s talk about your movie be coming out in December, “Lucifer” what inspired it?

My movie, “Kesari” inspired my new movie “Lucifer’. It was the feedback from the Return of Kesari that made me write “Lucifer”. You know in Nigeria they criticize a lot, and I don’t want to sound arrogant or proud. I didn’t want to see Kesari as just look. I mean lots of people are of the opinion that I was just lucky with the movie, Kesari, and won’t be able to do any other better movie and prove them wrong. I did Lucifer, which is a going to be exceptionally good as well.

Why the title “Lucifer” all your movies always have scary titles why?

I’m a devoted Muslim and I believe so much in God, so for me to use the title Lucifer” I just needed something that will attract viewers easily nothing more. I really don’t want to go into the storyline, but I always want something people will appreciate. The movie itself doesn’t have anything to do with the devil, as the name implies. I really want people to go and watch it.

How did you come about the title “Kesari”?

Let me open up to you, I went to South Africa 5 years ago. I met with a guy over there, they referred to, as king of boys over there, and they call him Kesari, we got talking for a while, and I just like his person and carriage, so the name has always been on my head, so I decided to title my movie after him “ Kesari” If you notice, I like very scary and captivating titles. That is why I give my movies titles such as Anini, Eku Metta, Kesari, The Return of Kesari’s is also in the Bible. I just name my movie after that guy in South African.