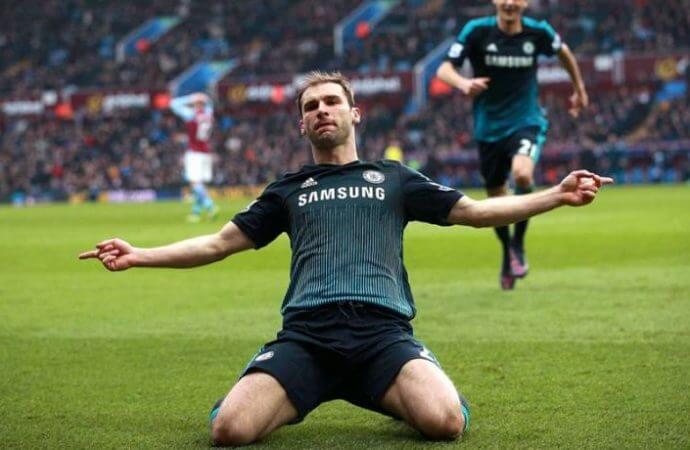 Branislav Ivanovic has completed a move from Chelsea to Zenit St Petersburg.

Ivanovic, who scored a goal and won a penalty as a second-half substitute in Chelsea’s 4-0 FA Cup win over Brentford on Saturday, has signed a two-and-a-half-year contract with an option for a further year.

Speculation surrounding 32-year-old’s future intensified on Tuesday when he did not travel with the rest of the Chelsea squad to Liverpool and was instead spotted at St Petersburg airport, where he was quoted as telling local reporters that he is “100 percent ready to play” for Zenit.

Ivanovic, who joined Chelsea from Lokomotiv Moscow in 2009, told Zenit’s official website: “I can say I’m very happy to come here, and to be at a big club like Zenit. I hope together we’ll have success.”

“I had a very big hope to come back to Russia and to play here. I am motivated and I think that I can play for many more seasons at the top level. I can say that I am excited to be here and everything went smoothly!”

Asked whether he prefers to play at right-back or centre-back, he said: “I am happy just to play. I am happy in centre or on the right. That’s probably a question for the manager but I am happy to play in any position.”

Ivanovic’s move brings to an end a glittering spell at Stamford Bridge that saw him make 377 appearances in all competitions and win every major domestic and European trophy, as well as scoring the winning goal in Chelsea’s 2-1 victory over Benfica in the 2013 Europa League final.

John Terry, a teammate throughout Ivanovic’s time at Chelsea, paid tribute to him on Instagram, saying: “Absolutely gutted to see Brana leave [Chelsea]. An unbelievable defender for us over the years and a great and BIG character and presence in the dressing room. Good Luck mate. Won everything at Chelsea and a proper LEGEND.”

Having spent seven seasons as a first-team regular at Stamford Bridge, Ivanovic fell out of Chelsea’s starting XI when Antonio Conte decided to switch to a 3-4-3 system in September and the defender was unlikely to be offered an extension to his contract, which was due to expire in June.

Chelsea have not signed a direct replacement for Ivanovic, but Conte’s defensive options were bolstered earlier in January by Kurt Zouma’s return to fitness after a serious knee injury and Nathan Ake’s recall from a season-long loan at Bournemouth.

“I didn’t call 2face an illiterate…..It is Useless and Baseless especially in This sensitive period” __ Blackface