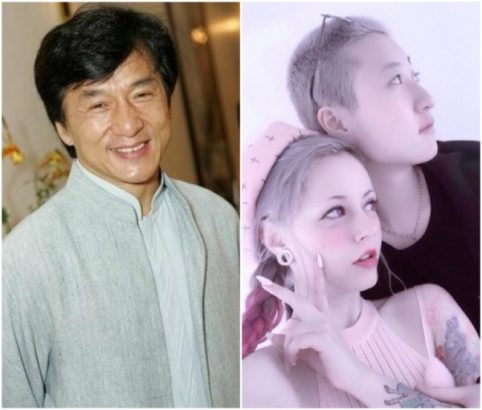 Jackie Chan’s daughter, Etta Ng has confirmed she is dating 30-year-old social media influencer Andi Autumn, just after she shared a photo of herself in front of a rainbow background, which came with hashtags: ‘#lgbtqai#lgbt #lesbian #androgynous (sic)’.

17-year-old Etta, revealed she was ‘speechless’ at how much support she has received after growing up with a lot of ‘negativity and close mindedness’ throughout her life.

She wrote: ‘I am in awe at the amount of support and love poured my way. I am speechless at how followers went to my Girlfriend @andiautumn and my account to show us both so much positivity. People all over the world have been rooting us on as Hong Kong media continues to mock.

I’ve grown up in a world of negativity and close mindedness but I am at that point where I realise that I can use my experience to tell my truths and help others just like me. Thankfully I’ve grown since the days I was powerless and uncertain what the world has for me. Thank you for the enormous outpour of love and acceptance (sic)’

Etta is a product of her mother is Elaine Ng Yi-Lei, a former Miss Asia brief affair with martial arts expert Jackie in the late 90s.

In 2015, the teenager who lives in Hong Kong confirmed she is estranged from the movie star and doesn’t feel as though he is her father.

She said: ‘He is not my dad. I have no feelings for him. He is my biological father but he is not in my life. ‘He never existed in my life. I will never regard him as a father. ‘I would not say that he is my dad. I would say, ‘Oh, Jackie Chan, an actor’.’

Jackie Chan breaks down as daughter comes out as lesbian was last modified: October 11th, 2017 by Reporter