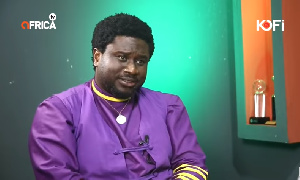 Controversial Pastor, Kwabena Asiamah of Universal Spiritual Outreach (Ajagurajah Movement), is in the news again for a controversial reason. He has has ignited a religious debate with his claim of Jesus marrying Mary Magdalene.

Pastor Kwabena said Jesus Christ got married to Mary Magdalene with whom he had 4 children in France. The Ghanaian Pastor who admitted to being occultic which according to him is a promotion in the interview with Kofi Adoma on Kofi TV, also countered the Christian belief of Adam’s first wife being Eve. According to him, Adam’s first wife is Lilith.

Here is a video of the interview below;

Meet The Innocent Businessman Whose Picture Was...