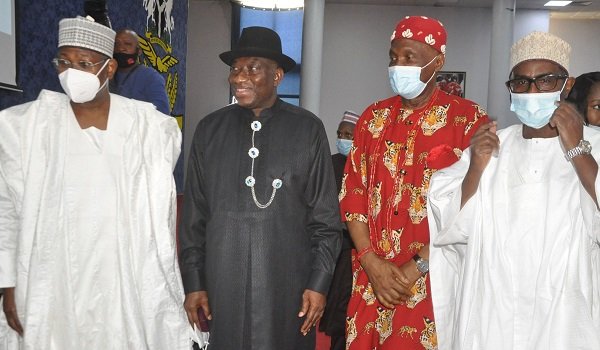 There was a sharp divergence of views among eminent Nigerians on Thursday on how to restructure the country.

It was at the 18th edition of the Daily Trust Dialogue held in Abuja.

Its theme was: “Restructuring: Why? When? How?”

Northern Elders Forum (NEF) Director of Publicity, Dr. Hakeem Baba-Ahmed, said the North was not opposed to restructuring as some believe.

‘Restructuring can be done in isolation’

To Dr Jonathan, for restructuring to be meaningful, issues of nepotism, ethnic and religious differences and lack of patriotism must first be addressed.

The former President, who chaired the event, emphasised that restructuring alone would not solve the country’s problem.

He said: “I believe that federalism and liberal multiparty democracy offer by far the best opportunities for good governance in our multi-ethnic nation.

“Discussion on restructuring will not help except we restructure our minds because some of the challenging issues at the national level still exist at the state and local levels.

“In some states, it is not easy for some persons to win an election because of the area they come from, the language they speak or their religious belief.

“Take a look at how local government elections are conducted at the state level.

“Why is it very difficult for an opposition party to win a chairmanship or councillorship seat in a state, despite the fact that the same party probably secured seats in the State Assembly and National Assembly elections organised by a federal election management body?

“This shows that restructuring alone may not solve all the anomalies in the system.

“I believe that restructuring for a better nation is good, but there are other fundamental issues we should also address because we cannot restructure in isolation without tackling the challenges that polarise our nation, such as nepotism, ethnic and religious differences as well as lack of patriotism.”

”Nigeria is a country of great men of intellect across the globe. We have arable land with abundant rain that grows almost everything. There are rich mineral resources buried under the soil across the entire landscape.

“We are a gateway to the Atlantic that harbours the wealth of nations. There is no part of our country that has nothing to offer the nation if we do things right. Let us nurture what we have for the good of all our people…”

According to him, every federation is a product of the dynamics of its historical evolution and inter-group (ethnic, religious, linguistic, cultural) relations.

The former INEC chairman said: “However, the better the framework/structure for management of diversity, power and resource sharing is in a federation, the more stable, peaceful and socio-economically developed it would be.

“For its stability, progress and development as a modern nation-state, Nigeria’s current federal structure needs refinement and improvement, or some form of what can be called restructuring.

“We need elite consensus to bring it about, and we need good democratic governance to nurture and entrench political accommodation of diversity, as well as equitable power and resources sharing,” he said.

In the short term, he said the government should set up a committee to review the reports of the Political Reform Conference and the National Conference, review the federal legislative list, begin the process of a constitutional amendment, set up an agency for intergovernmental relations, and introduce governance reforms to improve efficiency and effectiveness in governance among others.

In the medium term, he wants more responsibilities given to the states while in the long term, other constitutional and administrative reforms needed to ensure the efficacy of the Nigeria state should be adopted.

He said effort was needed to generate an elite consensus on the necessity of restructuring, which he defined as a redistribution of power and resources from the federal to the state governments which should be done before the 2023 general election.

Jega said: “The embedded imbalance, inequities and perceived injustices in the current federal system in Nigeria have to be addressed as soon as possible to enable Nigeria and Nigerians to acquire the requisite stability and peaceful coexistence amenable to accelerated, sustainable socio-economic development.

“The best strategy for success is the pursuit of systematic, incremental positive changes through constitutional amendments.

He said: “The level of dissatisfaction in the country as evidenced by the #EndSARS protests gives one the impression that any delay may lead to a mass boycott or disruption of the next elections to the point that we may have a more serious constitutional crisis of a nation without a government.

“To restructure Nigeria, we need a constitutional conference of the ethnic groups in Nigeria.

“To use the current National Assembly as the forum for constitutional amendments grants a tacit recognition of the overthrow of our democratic norms by the enthronement of a military constitution by which they are composed.

“The outcome of the constitutional conference must be subjected to a public plebiscite in which all adult Nigerians shall have the right to vote.

“This process should be open, it should be supervised by international agencies to validate its transparency and thereafter usher new elections based on its provisions and structure.

“This process in my view will ultimately refocus our country, breed a democratic culture that emphasises more on selfless service rather than individual enrichment, promote genuine unity instead of ethnic bigotry and challenge our capacity to exploit our abundant potentialities to make life more abundant for our people.”

He added: “What we are asking for is to restructure the country back to what we had before independence because that is the constitution that the founding fathers of this country agreed to.

“That must be made clear and not be confused with what we are saying. We want a constitution that everybody agrees to, and that will ensure peace and unity in the country.”

He insisted that it was a “well-known fact that in a heterogeneous country like Nigeria, the system of government we are operating now will not work and it has not worked.”

He said that the North is committed to unconditional restructuring.

His words: “We are ready to engage anybody anywhere anytime to discuss restructuring.

“What we will not accept is a situation where the law is created and made in such a way that we now agree to everything else that other parts of the country bring.

“And that is why I wouldn’t get involved in this discussion about whether we should maintain the 36 state structures. Let’s put Nigeria on the table to find out what it is that works best for all Nigerians.

“I think that is the way to go. It is wrong to say that the North is opposed to restructuring. It is misinformation,” he said.

Ogbe: many questions to answer

Chief Ogbe said that while the ACF supports restructuring, it is at a loss as to the modalities for the exercise.

Ogbe said: “Let me protest vigorously to the organisers of this conference. You cannot call Ohanaeze Ndi’Igbo, call Afenefere and completely omit ACF.

“You are trying to solve a problem by creating another one. You are telling us that we don’t exist or that we have no opinion and that is unacceptable.

“We are in a country where the only industry is the government. The economy of this country is dying so fast and that is where the tragedy is coming from and that is why our children and grandchildren should realise that they have nothing to hold onto.

“We say the 1960 constitution was very good. If it was so good, why was there a coup on January 15, 1966, with that bloody massacre of people? Six months later, there was a counter-coup and then a civil war where nearly two million people died.

“The big thing is the economy of this country. How many can count the number of factories that have died in this country?

“In Kano alone, 126 factories have closed shop and we are talking about creating jobs. You cannot take a loan from the bank with 35 per cent interest rate.

“In dealing with the problem confronting us, restructuring is absolutely necessary. In what shape, is the question to ask. Will states surrender their autonomy? Are we returning to the regions of 1960? That is where the problem lies.”

Chairman of Media Trust Limited, Mallam Kabiru Yusuf, who set the stage for the dialogue said there is widespread dissatisfaction in the land.

He said: “It’s fair to ask: when have Nigerians ever been satisfied?”

According to him, “what seems special about Nigeria, is that while the natives are permanently restless, there is no sense of urgency from their governments”.

“But when it is threatened, as during the EndSARS protests, the Buhari government can go into overdrive, sending ministers back to their constituencies. But then matters quickly return to the old normal.

“The default position is to wait on events, issue press statements, in response to recurring outrages; display pictures of meetings and briefings on television and repeat promises of better days to come.

“But in the seeming absence of systematic planning and diligent follow-up, small gains are lost and progress is stalled.

“This lack of vision and vigour has affected everything, including dealing with urgent national issues. One of which is the agitation for ‘Restructuring’, the subject of our discussion today.

“During its campaigns, the ruling party pledged to introduce constitutional changes that will establish ‘true federalism.’

“It set up a committee headed by Governor Nasir El-Rufai of Kaduna State, which accepted many of the popular ideas of ‘restructuring’, including state police, a revised formula of revenue sharing and abolition of the local governments.

“Not much has been heard about the El Rufai report since the APC was re-elected to a second term about two years ago,” he said.

SUJIMOTO: Starting 2021 with an Attitude of Gratitude