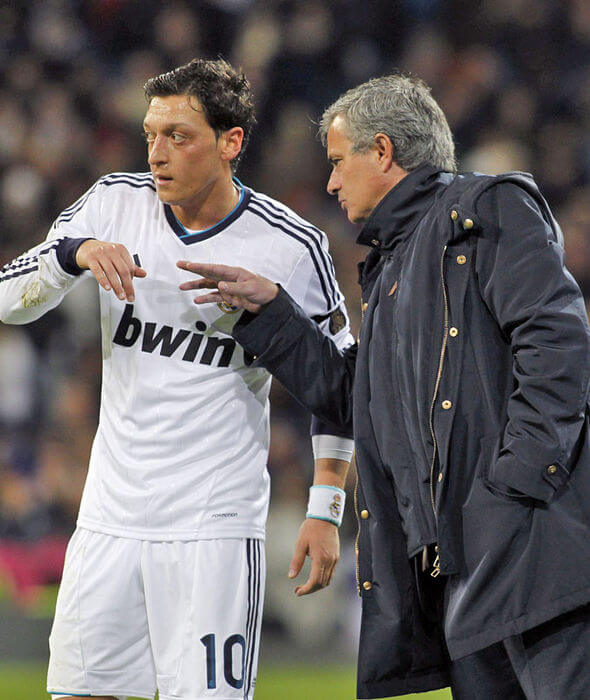 Former Galacticos playmaker, Mezut Ozil has revealed he was called a “coward” and a “crybaby” by Jose Mourinho during a furious half-time bust-up with his then Real Madrid boss.
The Germany international spent three seasons playing under Mourinho at Santiago Bernabeu, during which time he won La Liga and the Copa del Rey.
However, Ozil’s work ethic and contribution to the cause was questioned by the Portuguese in a half-time spat, during which the now Arsenal midfielder angrily hit back at his coach.
“Mourinho screamed at me ‘Do you think two nice passes are enough? You think you are too good to enter a duel. You think you are so good that you can play at 50 per cent. Do you know what it looks like when you enter a duel? Let me show you.’ He then tiptoed around the dressing room with his hands close to his body and pursed lips,” read an extract from Ozil’s book ‘Die Magie des Spiels’, which is being serialised in Bild.
“I lost it and screamed at him to go out there on the pitch and play himself, taking off my jersey and throwing it at his feet. I told him to put it on and go out there.
“Mourinho was just laughing and sniped ‘Are you giving up already? You are such a coward. What do you want to do? Get in the warm shower and wash your hair? Do you want to be alone? Or would you rather show your team-mates, the fans and me what you can do? You know what Mesut, why don’t you start crying! You are such a crybaby, get in the shower. We do not need you.’
“I grabbed my towel and walked past him into the showers without saying a word to him.
“I later apologised for my behaviour to captain Sergio Ramos and the rest of the team.”