Home Sports Joshua at his heaviest for Klitschko clash
Sports 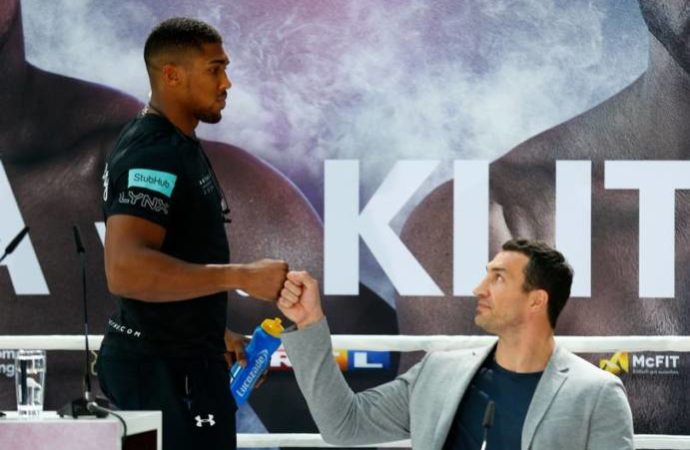 Anthony Joshua weighed in at a career-heaviest for his eagerly anticipated showdown against Wladimir Klitschko on Saturday.

The Briton tipped the scales at 17 stones 12lbs 2oz (113.4 kg) ahead of facing Klitschko for two versions of the world heavyweight title in front of 90,000 spectators at London’s Wembley Stadium.

Joshua, 27, was ten pounds heavier than Klitschko, who tipped the scales at 17 stones 2lb 6oz at Friday’s weigh-in at nearby Wembley Arena, with a crowd of 2,000 watching proceedings.

Klitschko (64-4 53 KOs), 41, was five pounds lighter than he was for his previous fight 17 months ago when he lost a surprise points decision to Joshua’s fellow Briton Tyson Fury.

The Ukrainian, who was his lightest since 2009, can win back two of the three titles he lost to Fury by beating Joshua, who has stopped all 18 professional opponents since turning professional after his 2012 Olympic gold medal triumph.

Thursday saw Klitschko try to unsettle his opponent by suggesting Joshua’s physique was like that of an over-muscled and immobile body-builder.

“I’ve never seen AJ (Joshua) as big as he is right now. He is as big as Arnold Schwarzenegger at his best,” said Klitschko. “He’s a puncher. I’m a boxer that can punch.”

But Joshua refused to rise to the bait and on Friday he would not be drawn when asked about how he would win.

“It depends if I see an opportunity,” the 27-year-old Joshua said about the possibility of a knockout.

“My main focus is to focus round by round, for 12 rounds. I don’t hate Klitschko, I just want to beat Klitschko.

“I’ve been switched on since December 10, my last fight. All I have to do is focus on this fight and making it as easy as possible.

Klitschko, who has had 50 more professional fights than Joshua, hopes his superior experience will see him become world heavyweight champion for the third time.

“I just have this feeling — this is my night,” said Klitschko, who turned professional after winning gold at the 1996 Olympics.

Lennox Lewis, the last Briton to hold two versions of the world heavyweight titles in 2002, believes Joshua will prevail.

“There are still unanswered questions with Joshua, but Joshua (to win) early,” said Lewis.

Deontay Wilder, the World Boxing Council (WBC) heavyweight champion, was present at the weigh-in and the American could face the winner of Saturday’s bout in the next 12 months.

“A victory for Joshua would be better because people want to see the Joshua fight,” Wilder told reporters.

“But I’m proud of both guys, this is exciting, I had to be here.

“It was not as if Fury beat Klitschko up. He didn’t take a beat down, he should be fresh. We will see if age plays a big factor.”

Joshua at his heaviest for Klitschko clash was last modified: April 28th, 2017 by Arinze Ago