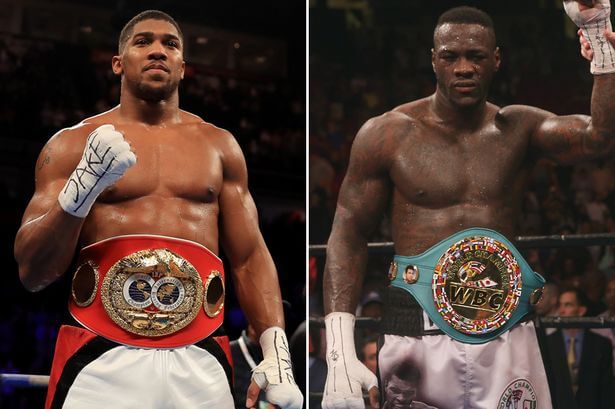 Former World Champion, Lennox Lewis has spelt out in clear, unequivocal terms what Anthony Joshua has to do if he really wants to succeed him as the undisputed heavyweight champion of the world.

He tells Joshua: ‘Go order Eddie Hearn to make the fight with Deontay Wilder. Now is the moment when you must take charge of your own destiny.’

Lewis is in no doubt that it is the British end of the infamously prolonged negotiations which is sabotaging the heavyweight fight of the decade.

Speaking by phone from his home in Canada, where he is preparing for a live appearance on stage at London’s O2 next month, Lewis adds: ‘I was with Wilder in Washington last week and it is clear Joshua doesn’t want the fight.

‘He explained to me all the difficulties he is having with Anthony and Eddie, of how AJ is listening to Hearn. Deontay most definitely wants this fight more than any fight.’

One factor above all others convinces Lewis that this is the accurate version of the increasingly fractious events preventing a Wembley Stadium spectacular – the money.

He explains: ‘Joshua said he would take $50m in a heartbeat but when that offer came he didn’t accept. I would have taken fifty million quicker than a heartbeat and gone through with any fight. But I never ducked anyone.’

READ ALSO: BEN STOKES CLAIMS HE WAS ‘SPEAKING TO GOD’ ON NIGHT OF ALLEGED FIGHT

Joshua Must Take His Take Charge Of His Destiny and Face Wilder – Lennox Lewis was last modified: August 10th, 2018 by Damilare Salami