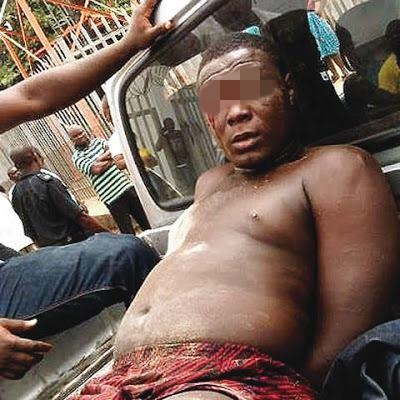 A 24-year-old most wanted armed robber identified as, Somadina Uzoho, popularly known as Zidane, has been finally apprehended by operatives of the Special Anti-Robbery Squad of the Imo State Command led by its Commander, Godfrey Victor.
While speaking to a Punch newspaper correspondent on Tuesday, a police source said Zidane, a dropout from the Federal Polytechnic, Nekede, had escaped to Ghana in 2012 after allegedly engaging in deadly criminal operations, and had been on the wanted list of the command for a very long time.
The source said, “He was arrested in Egbu in the Owerri North Local Government Area of Imo State on July 28 following intelligence information.
“We equally picked his accomplices from various locations. The gang was a group of cultists belonging to the Vikings Confraternity from the Imo State University, Federal Polytechnic, Nekede and some street touts.
“They were responsible for the killing of a police inspector, one Inspector Offor, sometime ago. Zidane was involved in an armed robbery at Royce in the state capital. He and another suspect escaped while two others that were caught were set ablaze by the people.”
It was gathered that Zidane, who claimed that he was a footballer, shot a member of the Aye Confraternity following a disagreement between his cult and the rival cult members.
“The town is calm now following their arrest. People are happy with the development. They rob students of their phones on a daily basis; they carry out their lawless operations at funerals.
“He (Zidane) doesn’t waste time in shooting because of his diminutive stature. If you underrate him, he fires immediately,” the source stated, adding that Stanley Ofia, Ike, Uchenna and Ayiam were picked in connection with the crime at different places while others were being trailed.
Zidane, who said that he was tired of committing crime, explained that he had escaped to Ghana in 2012 when the heat became too much on him, adding that his absconding to Ghana made him to lose his studentship at the Federal Polytechnic, Nekede.
He, however, denied committing murder, but acknowledged that he shot one rival cult member when there was an inter-cult clash between the warring groups.
Confirming the breakthrough, the state Commissioner of Police, Chris Ezike, said, “We are mopping up; we are cleaning the town. We are making huge breakthroughs. The whistle-blowing policy of the command is working perfectly well.”
Jubilation as Most Wanted Serial Killer in Imo State, Zidane is Finally Arrested by Police was last modified: August 9th, 2017 by Arinze Ago