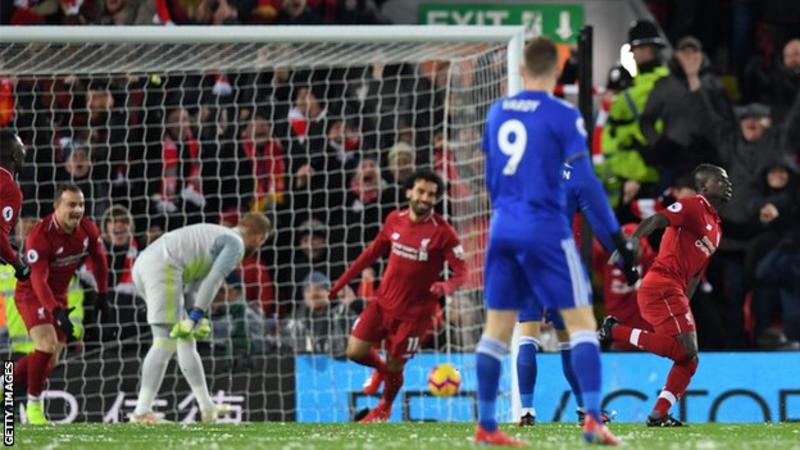 Liverpool manager Jurgen Klopp believes snow on the Anfield pitch contributed to a frustrating night for his Premier League leaders as they were held to a draw by mid-table Leicester City.

Liverpool extended their advantage over nearest rivals Manchester City to five points yet failed to build on Sadio Mane’s early goal on a pitch that Klopp believes made quick passing more difficult.

“You saw that the ball didn’t roll really,” said the German, whose side were denied a second-half penalty when Naby Keita was fouled by Ricardo Pereira.

“If you then have the ball pretty much for 70 to 80% of the time it makes life really uncomfortable.

“The only problem is if it stays on the pitch and that was actually the case.”

At half-time in the match Liverpool groundstaff only cleared snow in the half of the pitch towards the Kop, the end the Reds were set to attack.

Klopp’s side started the game in explosive fashion as they sought to capitalise on Manchester City’s defeat at Newcastle and took an early lead when Mane finished off a sublime 30-pass move in the third minute.

But Harry Maguire deservedly equalised in front of the Kop at the end of the first half after the hosts failed to deal with a free-kick carelessly conceded by left-back Andrew Robertson.

Maguire had earlier escaped a red card after deliberately fouling Mane 40 yards from goal when the winger looked to sprint clear, while Pereira’s foul on Keita added to Klopp’s frustration.

Liverpool could have gone seven points clear with victory over a team that had lost their previous three league and cup games.

But Leicester were threatening throughout and are only the second team to leave Anfield without suffering defeat in the league this season, following Pep Guardiola’s side on 7 October.

“We have a point more than before – it is not exactly what we wanted to have, but still everything is fine,” added the former Borussia Dortmund manager.