Home News Just In: INEC Decries Loss Of Properties Worth Millions of Naira To Flood
News

Just In: INEC Decries Loss Of Properties Worth Millions of Naira To Flood 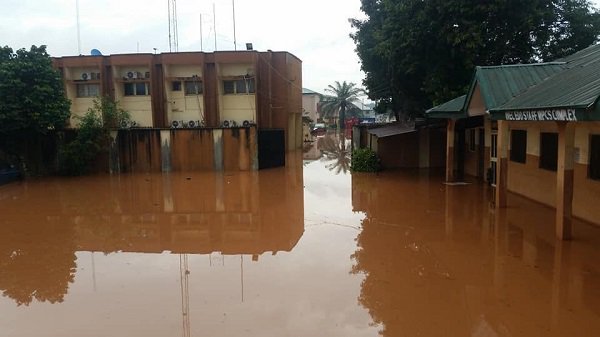 The Independent National Electoral Commission ( INEC ) has lost property worth millions of naira to flood in Edo State.

A heavy downpour of rain on Friday morning chased its workers out of their offices at the State headquarters located at Aduwawa in Ikpoba-Okha local government.

Activities have been paralyzed at the Edo INEC headquarters since August 24 when the building was submerged in flood.

Adjoining streets including the road leading to the Federal High Court and the Court of Appeal were submerged in flood.

The staff of INEC could not go into their offices on Wednesday following heavy rain that lasted four hours.

They had gone into their offices after cleaning it up when the rain started this morning.

A perimeter fence at the INEC’s building was pulled down by the flood.

When our reporter visited INEC, the workers were seen wading through flooded waters to get out of their offices.

Edo Resident Electoral Commissioner, Mr. Emmanuel Alex-Hart, said he has gone to Abuja to report about the damage caused by the flood.

Emmanuel said he was yet to quantify what was lost to the flood.

The Edo REC said he was informed about the flooding by the Administrative Secretary of INEC.

According to him, “I came to Abuja to discuss the issue of the flooding with the authorities.

“My administrative secretary called me to inform me about the current situation in Edo. They were in the office and had to wade through the flood water.

“The flooding has paralyzed activities at the INEC headquarters in Edo. Where the office is situated is a valley and when it rains, you have a surface run-off of water from all the areas to that place.

“We at INEC are at the receiving end.”

Just In: INEC Decries Loss Of Properties Worth Millions of Naira To Flood was last modified: August 31st, 2018 by Damilare Salami