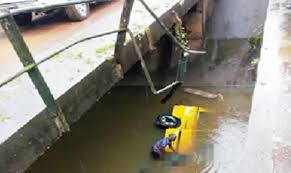 No fewer than two persons have been reported dead after a commercial vehicle plunged into a river in Osun State.

According to Folashade Odoro, the spokesperson for the Osun State Police Command, the accident happened at an area known as Oke-Gada in Ede on Monday.

One of the residents of the area said the accident happened around 7 pm. He said the driver was trying to avoid potholes near the bridge on the river.

The occupants of the vehicle were said to have been rushed to a private hospital in the area.