Home Sports Juventus Kicked Me Out Because Of Ronaldo – Higuain
Sports

Juventus Kicked Me Out Because Of Ronaldo – Higuain 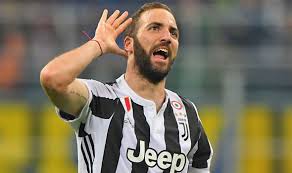 Gonzalo Higuain has said he was “kicked out” of Juventus this summer following the arrival of Cristiano Ronaldo from Real Madrid.

Juventus broke their transfer record to sign Cristiano Ronaldo for €100 million, and Higuain left to join AC Milan soon after.

But, while the Argentine said the signing of the former Manchester United man was the final nail in the coffin, the issues began back in May when he was left out of the starting line-up for the Coppa Italia final.

“Inside me, I had the feeling something was broken that day,” he told La Gazzetta dello Sport when asked whether things took a downward turn after that final. “Then they signed Ronaldo.

“It wasn’t my decision to leave. I gave everything for Juve. I won many trophies then, after Cristiano arrived, the club wanted to make a jump in quality and they told me that I couldn’t stay and they were trying to find a solution.”

Higuain was Juventus’ record transfer before the arrival of Ronaldo and, in two seasons with the club, won two Serie A and Coppa Italia doubles. But, despite being forced to leave, he said he does not bear the club any ill feelings.

“My feelings are that of affection because they really looked after me,” the 30-year-old said. “Both teammates and fans gave me so much affection.

“But I did not ask to leave. Effectively, everyone says it: they kicked me out. At Milan, I immediately received a lot of love and that is how they convinced me [to join].”

Juventus Kicked Me Out Because Of Ronaldo – Higuain was last modified: October 19th, 2018 by Igbokwe John

Shopkeeper In Court For Stealing N403,000 Worth Goods