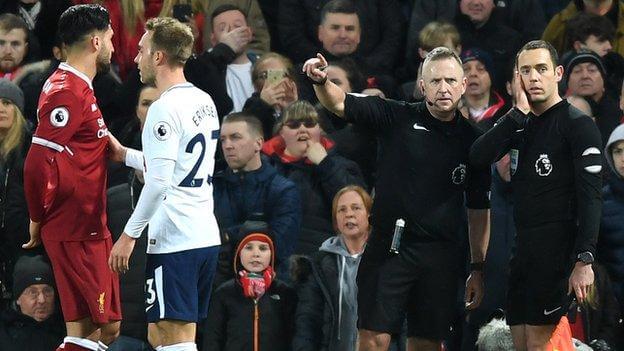 Liverpool record signing defender, Virgil Van Dijk showed a lot of frustration after referee Jon Moss awarded two penalties to Tottenham to enable the Londoners draw level with the Reds at Anfield.
Jurgen Klopp men were also angry at the first penalty award, when Kane was brought down by goalkeeper Karius, with referee Moss ruling Dejan Lovren’s touch had played the striker onside in the build-up.
Van Dijk, Liverpool’s record signing, accused Kane of diving.
“I think it is a dive. You see him diving clearly and no-one is talking about it but I think it is a dive,” said the Dutchman.
“There is a lot of discussion about whether it is offside, yes or no, but I think it was offside as well.
“You could just see him making that dive. The referee made his decision together with the linesman. It was good for us that it got saved.”

It was the final act of a dramatic encounter in a thunderous Anfield atmosphere, with Liverpool holding sway and creating the better chances in the first half, leading through Salah’s goal.
But Spurs showed commendable resilience and calm to dominate large portions of the second half before Victor Wanyama struck a powerful equaliser 10 minutes from time, returning Karius’ punch back into the top corner in front of the Kop from 25 yards.
Salah’s breathtaking Lionel Messi-style second looked to have settled the game until that late controversy which left Klopp cursing his luck and Spurs counterpart Mauricio Pochettino praising the character shown by his side as well as the officials.
“I congratulated the referee for showing that sort of character,” Pochettino said. “It was difficult to know at the time if they were right but in the dressing room I confirmed that they were right in every single decision.
“Sometimes we complain about them. I don’t as I decided a long time ago to stop complaining. It’s important to recognise when they are right because it’s a very difficult job for them.”