Kanu, Eguavoen, Siasia, others move to save Wilson Oruma 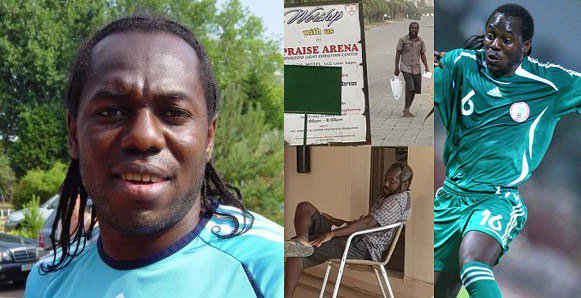 Oruma is still in mental distress after losing most of his money to swindlers six years ago.

The fund raising-match has been scheduled to hold in Lagos in February.

This was revealed by a former Super Eagles midfielder and ex-Chairman of Lagos State Football Association Waidi Akanni.

The 41 year-old Oruma, who played for Lens, Marseille and Lens in France as well as other European clubs, was allegedly defrauded by a pastor and some fake oil businessmen to the tune of N1.2 billion in December 2012.

They also want to use the event to advise current players on how well to manage their finances and life after retiring from football in a career talk programme during the event.

Akanni said, “Since the news broke that he (Oruma) had a relapse of an emotional disorder, his former teammates have been trying to reach out to people around him to show love to him.

“Taribo, Kanu and some of the Atlanta 96 set are keen to turn out for their former teammate.

“They have all agreed to reach out to his family to see how they can help him out and also use the opportunity to educate the current players on how to plan their future after retirement.

“I’m sure other players who will be contacted later will be willing to take part just as the Lagos State government and the Delta State government, where Oruma hails from.”

Kanu, Eguavoen, Siasia, others move to save Wilson Oruma was last modified: January 12th, 2018 by Reporter

Why PMB approved payment of N40m to Obasanjo, Jonathan, Atiku, others – Boss Mustapha